Notes on Streaming: GODZILLA: PLANET OF THE MONSTERS and THE FROZEN DEAD (GLACE) Both Surprise 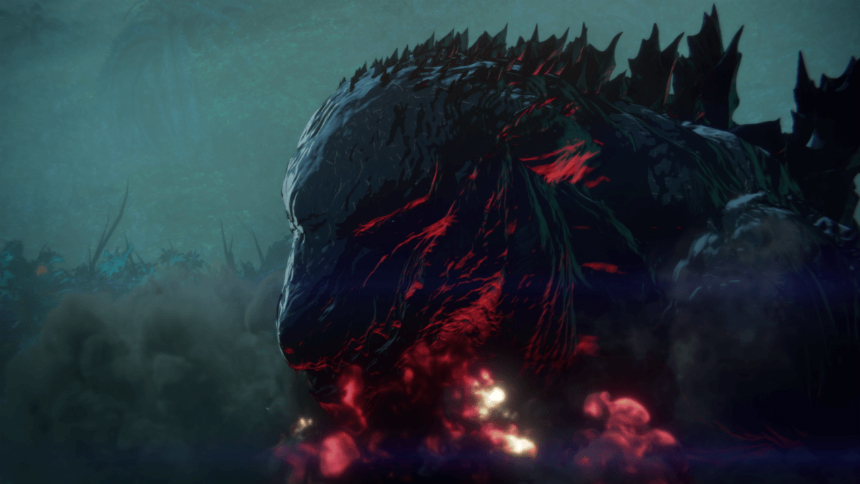 Is it just me, or do January's new offerings on streaming services feel ... er, kinda non-essential? Expectations may play a bigger role this month than I had anticipated, but there are pleasures to be enjoyed.

From the trailer I saw, I fully expected Godzilla: Planet of the Monsters (aka Godzilla: Monster Planet) to be a dead-serious animated affair with a new take on Godzilla. Released this past weekend on Netflix as a 90-minute movie, the first third of the story is set in outer space on a ship that has been traveling for 20 years and is rapidly running out of resources.

The premise is that Godzilla and a flock of other monsters rose up at the end of the 20th century and began wiping out humanity. Not content to stick close to Japan, Godzilla can be seen in Paris and other cities worldwide with easily recognizable landmarks, stomping around amidst explosions and futile military operations to stop him.

Most feared, of course, is Godzilla's "atomic breath," which can wipe out anyone within range with fire and, er, atomic stuff. (We presume; I'm not sure about the accuracy of the English subtitles for the Japanese production). At the last possible moment, an alien race manifests in orbit, offering a way out for all the humans who can fit in a spacecraft.

In a hurry to depart the planet -- see "atomic breath," above -- humans accepted the offer, jumped off into a spacecraft, hoping they could find a habitable planet ... somewhere. As things get worse on board, everyone becomes desperate, and so finally it's decided that they should give up and return to Earth, hoping that with the passage of time, Godzilla will have retired to Florida and/or died.

Again, having watched the trailer, I mistakenly thought it was all set in outer space and that we might be able to enjoy a giant-monster version of Jason X. Instead, they return to Earth, and, guess what, Godzilla is still the King of the Monsters. While I was in the mood for monsters, I wasn't particularly keen to watch an hour of military anime, though I must acknowledge that it is extremely well-done military anime, and it is cool to see Godzilla and other monsters in animated form. Originally titled Glacé (literally, ice, I believe), the French-language series has been retitled The Frozen Dead for consumption on U.S. Netflix, which makes it sound like a zombie horror flick. Instead, it's a very sober-minded mystery series that follows a French police detective from Toulouse who is sent to a small town in the snowy mountains to offer his expert assistance on ... the death of a horse.

That's right, a horse has been tragically murdered, but since he belonged to a wealthy and influential (and haughty, of course) businessman, Martin Servaz (Charles Berling) has been summoned to help the inexperienced local detective Irene Ziegler (Julia Platon). Nursing a cold, Martin wants off the case as soon as possible, especially since the town is also home to a maximum security facility where a man named Hirtmann (Pascal Gregory) is incarcerated.

By the end of the first episode, we've learned the connection between Martin and Hirtmann, but various threads remain to be tied down, including how new prison psychiatrist Diane Berg (Nina Meurisse) figures into things, and what, exactly, Hirtmann might have to do with the murdered horse, and much, much more.

I've sampled the first three of six episodes so far, and, though the series freely utilizes familiar tropes, it's sufficient different and distinctly unsettling to make me want to watch more. If you're in the mood for an unhurried, adult-oriented mystery, The Frozen Dead might fit the bill. 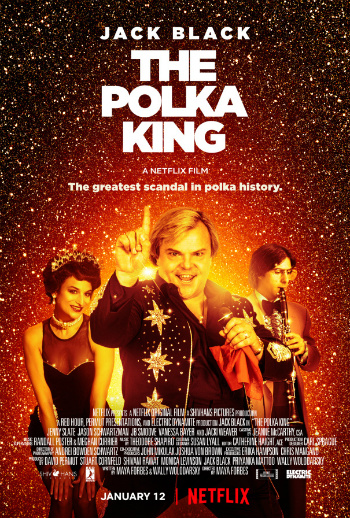 Last Friday, I caught up with the 2009 documentary The Man Who Would Be Polka King in preparation for watching The Polka King, starring Jack Black, which was probably a mistake,

The doc is raggedly assembled and features a kinda annoying voice-over, though it does a solid, effective job of presenting information about Jan Lewan, who rose up from a series of odd jobs to become a successful musician and bandleader in Pennsylvania, even earning a Grammy Award nomination. Unfortunately, it turns out that he financed the expansion of his mini business empire by selling promissory notes to fans and friends, notes that he was unable to pay back.

Employing a broad Polish accent, similar to the real-life Lewan, Black's performance dances along a thin line between sincerity and parody, which also applies to the entire film. Director Maya Forbes (Infinitely Polar Bear) cowrote the screenplay with Wallace Wolodarsky and captures a slice of Americana that is ultimately a seriocomic tragedy.

From all appearances, Lewan was not an outrageously evil criminal; he was a businessman who wasn't very good at business, and allowed his dreams of success to cloud his vision, eventually getting in so far over his head with debt that he started making more and more poor decisions, decisions that hurt a lot of people who naively put their trust in him.

Sometimes, though, The Polka King takes a false step, pushing too far into parody, as with Lewan's live-in mother-in-law Barb, played very, very broadly by Jacki Weaver. The third act also features a key scene that tries to bring the narrative to a crashing high point, but instead feels insensitive and false. Other scenes feel at though they were inserted to give the actors, including Jenny Slate as Lewan's wife and Jason Schwartzman as Lewan's best friend, time to shine.

But, hey, comedy is hard, especially when everyone is trying not to wink too hard.

One final note: Irish suspense drama Bad Day for the Cut is very, very good. Even though this site's founder and editor, Todd Brown, is Head of International Acquisitions for XYZ Films, which was involved with the film, I had no recollection of it debuting at Sundance last year. (Todd is very, very busy; and mostly people just assume I'm supposed to know things when, in fact, I know next to nothing.)

Anyway, the film starts off with a middle-aged man who lives with his mother on a farm in Ireland and establishes that isolated abode before a tragic incident sets the man off, seeking revenge. It's violent and bloody without glorying in it; mostly, it's a smash bang kind of thing that arrested my attention and made me wonder what would happen next. Highly recommended. And it debuted on Netflix this past Friday as well.

Notes on Streaming calls attention to films or episodic shows that debut on various streaming services worldwide. The writer is based in the U.S. 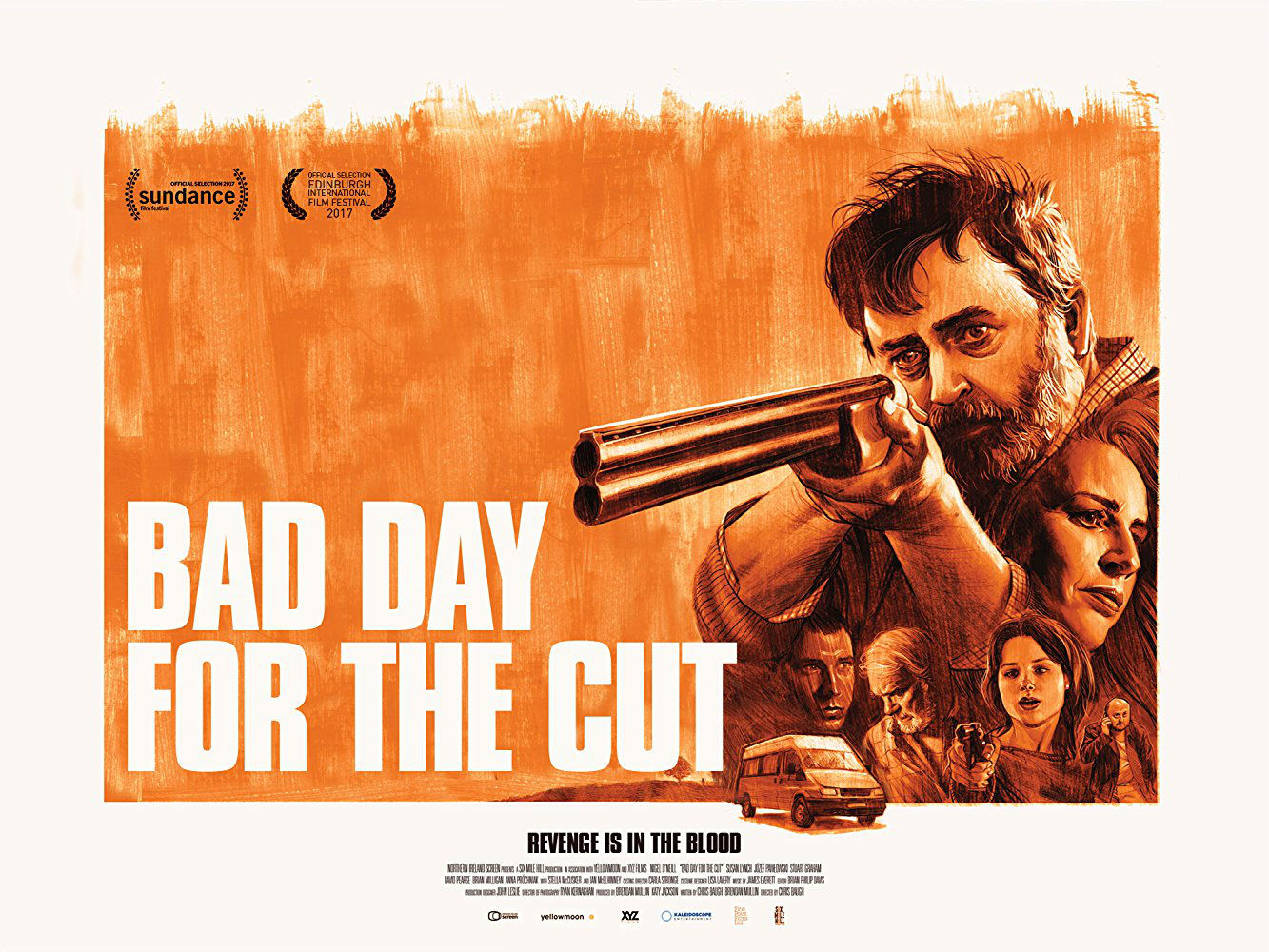 More about Godzilla: Planet of the Monsters

More about Bad Day For The Cut