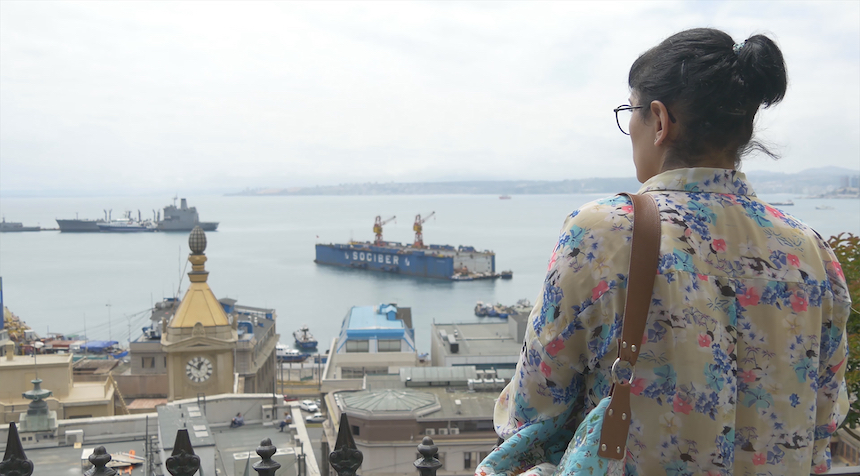 Santiago International Film Festival - or SANFIC - braces for the 13th edition introducing more than hundred international and domestic productions at the Chilean gathering. Set to be opened by The Summit by the Argentine director Santiago Mitre, the festival hosts two competition sections, international and national. Autumn, Autumn by Jang Woo-jin; The Family by Gustavo Rondón Córdova; The Desert Bride by Valeria Pivato and Cecilia Atan; The Territories by Ivan Granovsky; Makala by Emmanuel Gras; In The Intense Now by João Moreira Salles; Porto by Gabe Klinger (read our review), Resurrecting Hassan by Carlo Guillermo Proto; Summer 1993 by Carla Simón will compete in the international competition whilst eight titles, including four world premieres and four national world premieres, will compete in the national section: the documentaries In Transit (directed by Constanza Gallardo Vásquez), Jaar, The Lament for Images (directed by Paula Rodriguez Sickert), Stealing Rodin (directed by Cristóbal Valenzuela) and the fiction films Frog (directed by Juan Pablo Ternicier), The Color of the Chameleon (directed by Andrés Lübbert), The Mother, the Son and the Grandmother (directed by Benjamín Brunet), My Father’s Memory (directed by Rodrigo Bacigalupe Lazo) and Kingdoms (directed by Pelayo Lira).

The festival prepared a retrospective of German DoP, Rainer Klausmann, who is credited under Werner Herzog and Fatih Akin oeuvres. Besides his latest work on Akin´s project In The Fade awarded at Cannes Film Festival, Klausmann will introduce also Fitzcarraldo, The Dark Glow of the Mountains, Lessons of Darkness, Head-On, Downfall, The Edge of Heaven and Soul Kitchen. The second guest of honor arriving at the festival is the leading actor in the upcoming film by Lars von Trier, The House that Jack Built, Matt Dillon. Besides presenting his well-known films in a retrospective, Dillon will hold a masterclass about his career.

Another thematic showcase will be Spanish Focus featuring latest Hispanic films such as Pedro Aguilera's Sister Of Mine (read our review), The Olive Tree by Icíar Bollaín, In the Same Boat by Rudy Gnutti, The Next Skin by Isaki Lacuesta and Isa Campo and The Open Door by Marina Seresesky and the gem of the world cinema, Luis Buñuel’s surreal masterpiece The Exterminating Angel (read our review).The special sidebar Shoot The Shooter will be dedicated to Yoko Ono and her audiovisual works.

Chilean Cinema on the display in Santiago:

The Color of the Chameleon (Andrés Lübbert)

During Pinochet’s dictatorship, 21-year-old Jorge became an instrument for the Chilean secret service, which forced him to work with them in an extremely violent fashion. Finally, after he managed to escape to Europe from Chile, he became a war cameraman, a job that has taken him to all of the world’s conflict zones. Today, his son Andrés paints a psychological portrait of his father, and together they look into the depths of Jorge’s unfinished past. This new feature-length film by Andrés Lübbert, a Chilean filmmaker born in Belgium, had its world premiere at the Guadalajara Festival’s Iberian-American Documentary Feature Film Competition.

Four transsexual persons walk around as if they were carrying a heavy disguise. Mara is a poet, a teaching student and an activist; Gis is trying to get her GED while attempting to cohabitate with her two mothers who don’t understand her transition; Patricia is an empowered working woman who nevertheless is afraid to speak her truth to the rest of the world; and Matías has a beautiful family, but lives in a small town that has a hostile opinion toward transgendered people. Through their lives, this documentary shows us how hard it is to live in a country that doesn’t understand them; a country that has no place for them.

The most recent documentary by filmmaker Paula Rodríguez observes the creative process of Alfredo Jaar, one of the most relevant Chilean contemporary artists, whom we received as a guest in SANFIC 6 showing his works Le ceneri di Pasolini and We wish to inform you that We didn’t now, as a part of our Shoot the Shooter section. His works show a wide range of situations including migration across the Mexican-American frontier, the Rwandan genocide or the coup d’état in Chile. Jaar believes that art is “the last place” for freedom within our society, and from this trench he unfolds his work as an act of resistance. This feature-length film goes over his works shown in Finland, Venice, Buenos Aires, Santiago and New York.

The Mother, the Son and the Grandmother (Benjamín Brunet)

The first feature-length film by filmmaker Benjamín Brunet was premiered at the Patagonia Film Festival and takes us to Chaitén after the eruption of its volcano, when Cristóbal, a young amateur photographer, arrives in his hometown. Through a photographic project he tries to rescue some unknown parts of his own roots. This is when he meets Ana, a strong woman who lives with María, her elderly mother. Despite being very sick and ignoring Ana’s insistence, María refuses to abandon her destroyed but beloved city. Cristóbal, Ana and María form an impromptu family, facing sickness and solitude while experiencing intense moments of change.

At age 50 and prompted by the death of his mother; Alfonso, a frustrated adapter of American TV comedies, is forced to deal with his father whom he can’t stand, as he is a reflection of all of his own affective shortcomings and stubbornness. Now, the senile father is losing his memory, becoming a child that hardly resembles the strong man he once was, and obsessing over the made-up fact that his wife is still alive, lost in a coastal hospital. Premiered at the Málaga Film Festival, Rodrigo Bacigalupe’s first work takes us on the adventure of finding a mother absent among the living, but still present in a father’s heart.

The first feature-length film by Pelayo Lira –who participated in SANFIC 5’s Chilean Talent Short Film Competition with El asombro and won the same competition during SANFIC 8 with La visita del cangrejo–, had its world premiere in BAFICI’s International Competition, where Daniela Castillo received the award for Best Individual Performance, and was also screened at the Karlovy Vary Festival. Alejandro, a university freshman, and Sofía, a senior who is working on her thesis, meet in campus and build a relationship that leads him to fall in love while she only seeks to satisfy her own sexual desires. In time, Alejandro’s teenage-like behavior will prompt Sofía’s rejection, while she figures out how to solve her future.

A June morning in 2005 the guards at the Chilean Museum of Fine Arts noticed that a sculpture by Auguste Rodin –a work worth hundreds of thousands of dollars– had been stolen. 24 hours after the fact, a shy art student returns the piece arguing that he had stolen it as part of an art project seeking to prove that “a piece of art was more present when it wasn’t there”. A decade after these events, artists, lawyers, theorists and the perpetrator of the theft himself relive the artistic-criminal episode through this documentary that is articulated as an absurd detective story, allowing us to look at the state of contemporary art from an ironic point of view where the contradictions of the artist’s work become evident.

Juan Pablo Ternicier’s second feature film takes place in Valparaíso in 1985, when journalist Jeremías Gallardo finishes his reports on a long history of crimes perpetrated by two former policemen, and which profoundly shook the public. Jeremías is the only journalist that manages to interview both policemen –Sagredo and Topp Collins–, and also records the moment their sentence is executed; the last death sentence dictated by a Chilean court. That night, Jeremías will have to attend the birth of his first daughter. On his way back to Chile’s capital, the road will force him to relive moments of his own hidden past, when he was entangled with the dictatorship’s intelligence services.

Do you feel this content is inappropriate or infringes upon your rights? Click here to report it, or see our DMCA policy.
ChileChilean CinemaLatin AmericaLatin American CinemaSANFICSantiagoSantiago International Film Festival