Cannes 2017 Review: THE BEGUILED, A Campy Anatomy of Lust 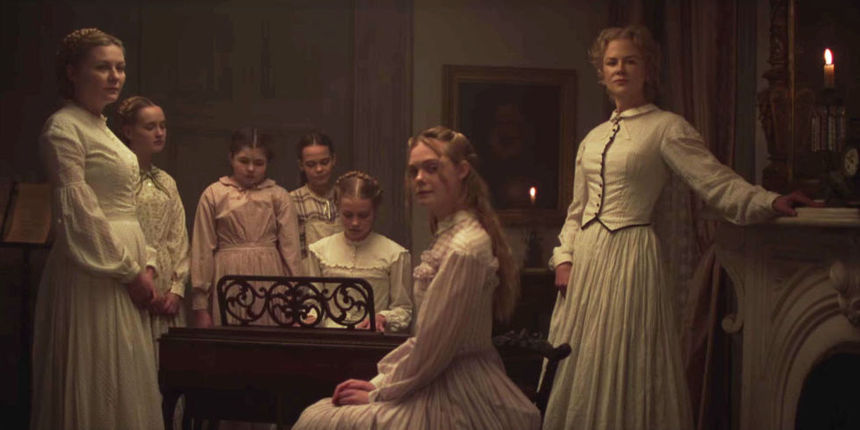 Sofia Coppola is a filmmaker whose work I've appreciated from a distance. I know she's a great director, but apart from Marie Antoinette, her stories of rich white people and their troubles has held little interest for me. But as a fan of the gothic, horror, and period film, The Beguiled certainly would seem to fit in my wheelhouse of film love. And while not without some problems of gender representation, the film is a gorgeous and campy romp, disguising itself as a period piece with just the right touch of horror.

Three years into the US Civil War in the Virginia countryside, Martha Farnsworth (Nicole Kidman) maintains what little normalcy she can at her school, with her five young charges and teacher Edwina Dabney (Kirsten Dunst). When collecting mushrooms in the nearby woods, one of the girls finds an injured Union soldier, John (Colin Farrell), and her sense of Christian charity leads her to bring him to the house. It seems it's been a while since there was a man in the house, and Martha, Edwina, Alicia (Elle Fanning) and the others are quite intriguied by the visitor, enough to shield him from the Confederate soldiers nearby and allow him to remain until he has healed. But while John declares his love for Edwina, he continues to flirt with the others, which will lead to his (literal and metaphorical) downfall.

Coppola and director of photography Philippe Le Sourd give us the Antebellum South as we likely all imagine it: lush with greenery, the air ripe with humidity, everything languid (almost to the point of dullness) even as bombs can sometimes be heard in the distance. While the food supply is reduced, the women are not starving, and the cleanliness of their clothes suggests that they haven't felt the real horrors of the war. Despite the occassional passing of soldiers, the house and its property are conveyed as an oasis (of heaven or hell, depending on your perspective).

Everything is lit by candle, giving a soft focus reminiscent of the most high-end period dramas, and the dialogue is also crisp and clean, as befits the ladies of the manor. Lady-like behaviour, even in dire circumstances, is Martha's priority. John is well aware of his luck, not only in being saved, but being help 'captive' in a house of beautiful and attentive women and girls, and the camera's female gaze wastes no time in giving Farrell the kind of sexual attention normally only given to the female form.

With a story such as this (based on a novel published in 1966), however, there are problems with gender representation. On the one hand, we have a female gaze of lust upon a man who is viewed as little more than an object; on the other hand, this is a male fantasy of being waited on hand and foot by women. John merely has to speak a few charming words (or possibly not even that) and the women fall at his feet. While the women aren't passive, per se, this adherence to stereotypical gender roles, and the idea that all women are just waiting for a guy to show up so they can have a catfight, is so tired that it's more than a little annoying that a woman director would choose this story. (And really, it would only take one of the adult woman or two of the young girls to overpower a one-legged man on crutches, even if he does have a gun).

But perhaps this story is different now than it was in 1966 (or in 1971 when the first adaptation was done)? We are definitely given the women's point of view, and John's charm is apparent to us even if it isn't to them (though that is another source of frustration). But Coppola finds the dark humour in the situation, and the later half of the film is filled with brilliant and sharp laughs. A more enlightened audience knows full well that John is not going get away with his behaviour, and these women are not devils, but merely protecting themselves and their own.

I've never found Coppola's films to be rich in substance, and The Beguiled is no exception; but then, it wears its story and themes on its perfectly ironed sleeve. We can read what Coppola is doing and laugh with the film, because we know how outrageous it is, at the same time as we can enjoy the lustful gaze on Farrell and smile when he receives his comeuppance.

Coppola has taken the classic Southern Gothic period film, added the female gaze, a pinch of horror, and more than a healthy dose of black humour to create The Beguiled. Beautifully shot, with stand-out performances by Kidman (who conveys emotion in the subtles twitch) and Dunst (whose repressed sexual desire is not pitied but sorrowful), it might not be a masterpiece, but it is arguably destined for cult status.

Do you feel this content is inappropriate or infringes upon your rights? Click here to report it, or see our DMCA policy.
Cannes 2017Colin FarrellElle FanningKirsten DunstNicole KidmanThe Beguiled