Review: THE UNTAMED, Riveting and Shocking, It Needs to Be Watched to Be Believed

Ruth Ramos, Jesus Meza, and Simone Bucio star in Amat Escalante's unique film about the relationship between a couple and a mysterious creature. 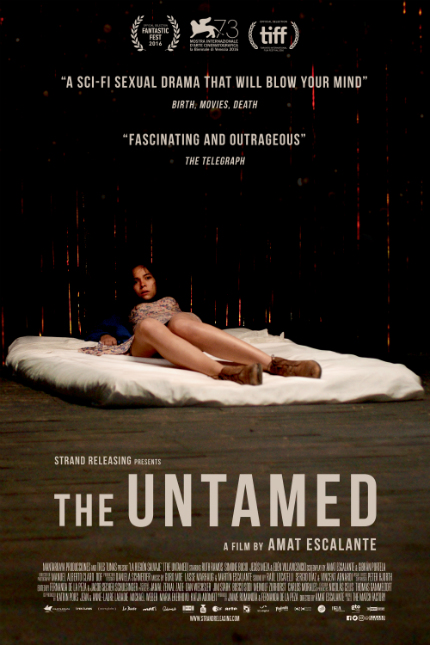 One of the reasons that I love fantastic genre film is that it can often find the most relevant and interesting metaphors for dealing with issues of social life, be they cultural, political, or sexual.

Escalante gives a healthy nod to Andrzej Zulawski's Possession in the film (and the credits), both in examining the importance of a woman's sexual pleasure and a man's jealousy when he cannot give such pleasure. But this is also adjusted to fit the socieconomic status of the characters; the tension over homosexuality and homophobia; and also the lack of blame to the woman for seeking to fulfill her desires. The film opens with Vero receive pleasure (and pain) from the creature, and while there is some mild titillation, Escalante emphasizes that Vero's pleasure is for her alone, and not for any man even in observance.

This fulfilment comes in the home of an older couple, who give access to the creature for the people who happen upon their cabin, lost in a strange fairy-tale-like wood, often shrouded in fog. And as stated, the creature can deliver pleasure, or pain, or both. This might be in part what the recipient wants, or what the creature thinks the recipient wants (or possibly deserves). That the women receive more of the pleasure and the men more of the pain is perhaps Escalante's point. In the macho culture of Mexico (and much of the world), and as the director makes clear in early scenes, a woman's pleasure (or general happiness) is barely even a consideration (unless it involves motherhood).

Against this backdrop is Alejandra and Ángel's family life; while not poor, per se, they need to keep their jobs. Alejandra works at a candy factory owned by her in-laws, further keeping her in an unhappy place; Ángel works in construction, surrounded by that macho culture that keeps his homophobia front and centre, and his sexual desires a secret so twisted in his mind that his violent outbursts seem almost acceptable. Almost, but of course not, and his spiral downwards is met with both resignation and necessary inevitability.

Against this is Escalante's trademark low-key lighting, framing the film in its social realist framework. A brief shot at the beginning of the film of an asteroid (presumably from whence the creature came) and the scenes with the creature are given a bit more warmth, but the film sets itself in the world of expectation and obligation, with its tinge of science fiction/magic realism. In this society, or any society, in which the needs and wants of our partner are not considered or at least attempted to be fulfilled (whether sexual or otherwise), the result is unhappiness often to the point of violence or misery.

It's hard to say much more without giving away what should be surprises and shocks to the audience. Needless to say, this is a very unique film, and one that has to be watched to be believed for how expertly Escanlante moves between the pleasure and the pain of his characters. A film both for monster movie fans and those who only dip their toe in elevated genre now and then, The Untamed is sure to leave a remarkable impression.

The film opens on Friday, July 21 at IFC Center in New York and on July 27 at Cinefamily in Los Angeles before expanding into other theaters during the following weeks. Visit Strand Releasing for specific release information.

Do you feel this content is inappropriate or infringes upon your rights? Click here to report it, or see our DMCA policy.
Amat EscalanteDenmarkFranceGermanyJesus MezaLa región salvajeMexicoNorwayRuth RamosSimone BucioSwitzerland