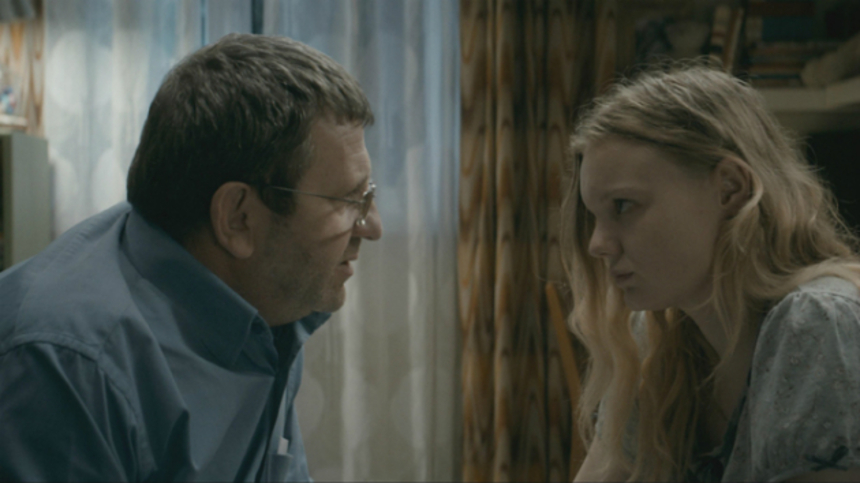 His other features have since played at the festival, and his latest, Graduation, is in competition, and while not a failure per se, it fails to have the incredible emotional impact of his earlier work, while exploring some of the same issues of the place of women in Romanian society, the negotiation of bureaucracy, the dismal state of the justice system, and the necessity of backroom dealing to get a fair chance. The main character simply doesn't evoke the same sympathy or pathos, and without that connection, any possible impact falls flat.

Romeo (Adrian Titieni) and Magda (Lia Bugner) have ensured that their daughter Eliza (Maria-Victoria Dragus) has received an excellent education, enough so that she has a scholarship offer in the UK, dependent on her exam grades, On the eve of those exams, Eliza is attacked near her school, which threatens her exam performance. Romeo begins the process of ensuring that Eliza gets the necessary grades, even if it means some bribery, and in the meantime also has to juggle his mistress (Malina Manovici) and her desire for more, and his elderly mother who is in failing health.

All of this action centres around Romeo, as he tries to assist his daughter, grease the wheels of the school system to make sure his demonstrably intelligent daughter doesn't lose out on a better life because of a horrible incident, negotiate his love for his mistress with his loyalty to his wife, and deal with his too-accommodating mother. Much as in Mungiu's earlier work, he follows Romeo like a shadow, as he is in almost constant motion between his daughter, the police officer in charge of the assault case who does his best to find the assailant, his home which is proverbially fracturing, and his own increasing frustration and anger. This is Romeo going in circles, with each movement seemingly tying him tighter into a trap of his own making that he won't be able to escape.

A film's main character can be likeable or not; they can be kind and generous, or bitter and angry; they can be intelligent or dumb, organized or inept, beautiful or ugly, or any of the above in between. The one essential thing they must be is interesting; the audience should want to know about them, be interested in the events that affect the character and their actions. Sadly, Romeo is not an interesting character. He's fine, but I had no interest in him, and my only interest in what happened to him had to do with the effect the events had on those around him.

On Eliza, the one to whom the assault happened, and who was the one taking (or not) the exams and whose future was in jeopardy; his wife Magda, who must decide whether to continue tolerating her husband's infidelity or find the strength to end her marriage; Romeo's mistress, Sandra, who finally has the courage to ask for more; even Eliza's boyfriend, Marius, in his few scenes, would have been a far more interesting character around whom to centre the story. But the lack of interest Romeo generates leads to a lack of caring. The only time I perked up is when he was encountering one of these characters, and I wished the camera would follow them instead of him.

I appreciate what Mungiu was trying to do in Graduation, and he doesn't entirely fail; his exposure of both the failure of the justice system to seek out the real criminals, the bureaucracy which fails to account for tragic events that cannot be helped, and the failure to assist those in need, is exposed with care and realism. But without an engaging focus, it failed to reach my heart as well as my head.