Black Nights 2016 Review: PORTO, Love Does Not Conquer All 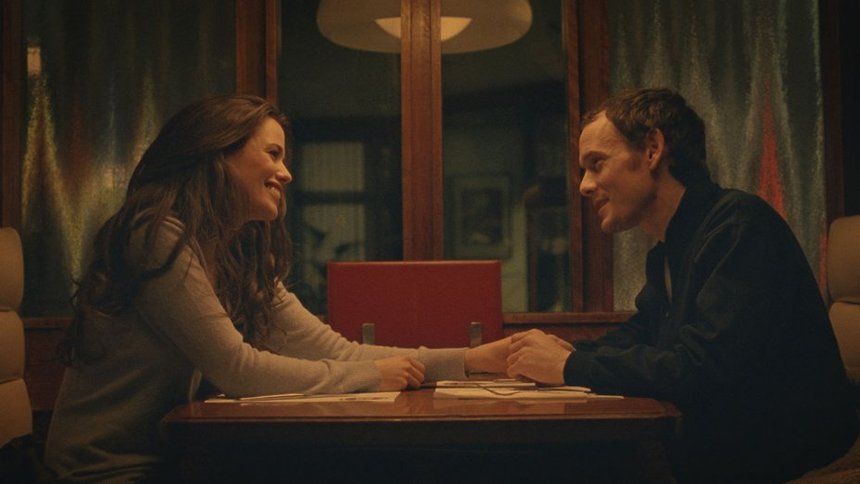 Call me a cynic, but I've always been skeptical of anyone who's in the first few months of dating who says that they and their partner were 'meant to be together' (maybe because at least half of those relationships end almost as quickly as they started). One beautiful night does not mean two people are soul mates, even if a connection is formed. Gabe Klinger's debut feature Porto seems to be pondering the same things: how do we know when something is real love, or just a momentary infatuation? How can we see who someone truly is after only a few hours, when arguably you are seeing them only as they want to be seen? Through this somewhat skeptical and gritty lens, Klinger looks at two people who come together for a night, connect, and then just as quickly fall apart.

Jake (Anton Yelchin), an American expat living in Porto, rents a small room and spends his evenings wandering from bar to bar, occasionally harassing people to buy him a drink. He frequently passes a restaurant, where 10 years before he once had a meal with Mati (Lucie Lucas), a French woman studying archaeology. He reminisces about their night together, told in flashback. Then Mati, also still living in Porto, recalls that same night from her perspective. They have never met since.

The movement between the now and then allows the audience to understand how moments like these can both capture and deceive us; if it was told in linear form, our attitude might be different. But seeing how the characters have moved on (admittedly, not happily) and what they are truly like, as oppose to their concept of each other, allows for greater and clearer reflection. Mati admits that she has had mental health problems in the past; Jake's behaviour suggests that he has as well, and continues to. This is both a bond and a curse, as Mati can see how she might be dragged back by Jake, whereas Jake sees love as a cure-all for his problems.

Do we become crazy, or more lonely or unhappy, because we fixate on moments in our past that we wish had gone differently? Or is that fixation caused by our craziness? Jake's and Mati's recollections have subtle but significant differences; both Yelchin and Lucas shine in their roles as the simplest looks and gestures carry a thousand words. Jake convinces himself (and tries to convince Mati) that this was 'meant to be'; Mati might agree that it is a special moment, but knows that such happiness does not guarantee a happy future. Jake might seem the shy, hapless, sweet American boy, but this haplessness hides a difficult and tenuous grasp on reality; Mati might seem the sophisticated European girl, but she is too intelligent to be swept away. Their respective perspectives put them at odds eventually, even when they remember the same moments.

Filmed in a skillful combination of Super 8, 16mm and 35mm, Klinger and his cinematographer Wyatt Garfield allow each to give a different perspective to the memories and moments (and indeed, both main actors as well as the director did some of the shooting, adding to the personal touch). Some are grainy, as they are filtered through lack of recollection and a conscious or unconscious desire to see the past differently. Others are slightly clearer, but still have the feel of a home movie, showing the intimacy and sweetness of the recollection, a place and time the former lovers perhaps would like to return to or just live in in that memory. And the city itself, Porto, lends itself perfectly to this heartsickness and love: the riverside and architecture filled with romance, the dark evening streets filled with possibility, but daytime brings loneliness and pain.

Influences on the film range from Jim Jarmusch to Chantal Ackerman to Alain Resnais; all very different directors, but ones that (mainly) have a European sensibility of the naturally poetic and the inevitably more pessimistic. But even I might still have a bit of a romantic heart, as I longed for an ending that I knew would never come. But this might have come in part from seeing Yelchin in one of this last roles; showing once again what a great talent has been lost.

A bit of an anti-Before Sunrise, Porto is less talk, more mood, and this might be a more accurate portrayal of how these nights of infatuation progress. With a simple yet elegiac score and a gorgeous Portugeous backdrop, Klinger creates a moving and haunting portrait of the strange moments of love, connection, and loss.

Do you feel this content is inappropriate or infringes upon your rights? Click here to report it, or see our DMCA policy.
Anton YelchinBlack Nights 2016Gabe KlingerLucie LucasPorto