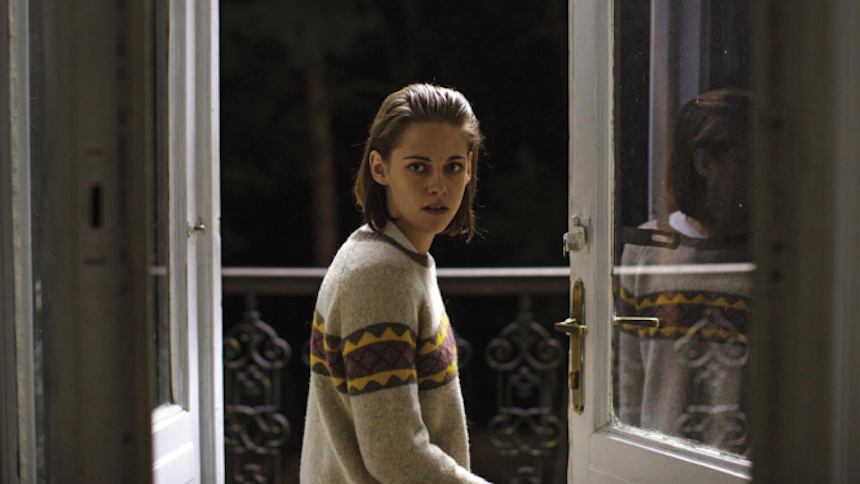 His previous film, The Clouds of Sils Maria, coaxed a assured performance out of Kristen Stewart as a confident personal assistant to a French movie star; to the point where she almost overshadowed the glamourous lead of the film, Juliette Binoche. Assayas collaborates once again with the young star in Personal Shopper - again in the employ of a famous actress - but here, he places her in practically in every shot.

Mixing the abstract with the mundane, Stewart plays Maureen, a budding amateur medium who trying to commune with her recently deceased twin brother. The movie starts almost like a Kiyoshi Kurosawa film, with Maureen attempting to make contact with the beyond by spending the night in the a dark old French country manor. Her day-job involves buying insanely expensive clothing and jewelry for a wealthy young movie star. It is clear that Maureen hates this job, she confesses this outright to her employer's sleazy boyfriend, but it pays the bills while she tackles her unfinished spiritual business.

Not content with just restless spirits and luxury goods, Assayas also drops in an anonymous sexual stalker and murder-mystery to boot. And yet, Maureen spends nearly the entire film alone, in shops, on her scooter, or on the train between England and France. Her boyfriend is in Morocco and occasional talks to her via skype. Her boss is always in one city or another, for a film shoot or a fashion show, and communicates with Maureen via notes left in her upscale Paris apartment. And the stalker sends copious amounts of anonymous text messages. I mean a LOT of text messages. For a film that has its lead spend a good chunk of its runtime glancing down at her phone, one would think it might get boring, but it not so.

Assayas alternates between satirically observing the transactions around five-thousand dollar dresses and handbags in upscale boutiques and the sexual charge and danger from this texting while perhaps being watched. Look for an impressively effective suspense-gag around receiving a string of SMS messages after being coming out of 'Airplane Mode.' All of the busy goings on plot-wise point to a 21st century need to disconnect with a world of endless distraction and do a little bit of collective soul searching. While this idea is not a particularly new one, the way it is approached here certainly is.

Personal Shopper at times brushes with unconventionality of an Apichatpong Weerasethakul film, but then it swiftly browses through modes like its lead character, trying on this and that whether it has permission or not. The resulting je ne sais quoi is less a liability than a feature, with Stewart's frantic-in-slow-motion performance augmenting the odd story.

The ghost is present in the film, quite manifest in fact, but is also perhaps imagined by her as well. How can she often fail to see her own hallucinations is the unorthodox question at the centre of the film. The answer is surprisingly simple, but profound nonetheless.