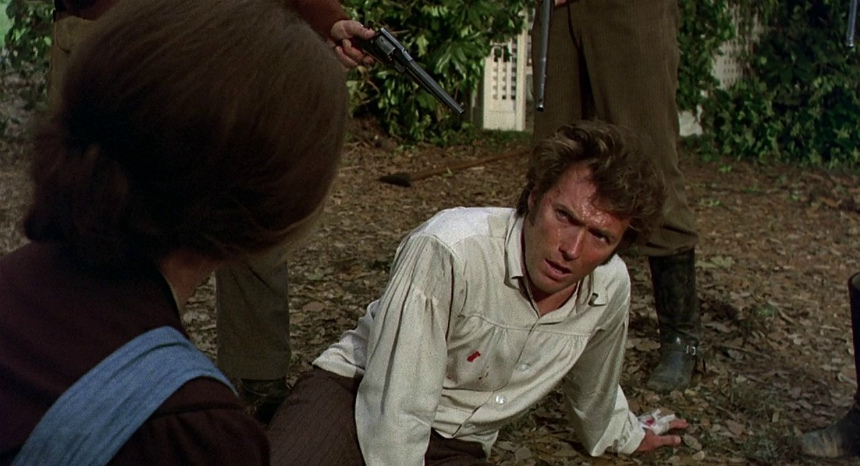 Sofia Coppola's new version of The Beguiled will debut at the Cannes Film Festival next week, ahead of its theatrical release in the U.S. on June 23, which makes this is an opportune time to consider Don Siegel's 1971 version starring Clint Eastwood.

Both movies are based on a novel by Thomas Cullinan, first published in 1966, that follows a badly wounded Union soldier who is given refuge in a Southern girls' academy, where "his presence sets in motion a tragedy of jealousy, hate and lust." (At least, according to Goodreads). As adapted by Albert Maltz and Irene Kamp (writing under their pseudonyms John B. Sherry and Grimes Grice), the film dramatizes that premise.

Clint Eastwood portrays John McBurney, the aforementioned Union soldier who is stumbled upon by Amy (Pamelyn Ferdin), the youngest of eight girls enrolled at an Academy owned by Martha (Geraldine Page) during the Civil War. Nearly unconscious and unable to walk on his own power, McBurney is carried into the large, plantation-style residence, where he is treated under watchful eyes by Martha, her slave Hallie (Mae Mercer), and Edwina (Elizabeth Hartman), the 21-year-old teacher.

As the story begins, the tide is obviously turning against the Confederacy. Still, McBurney is an enemy combatant and should be handed over immediately to the Confederate soldiers who patrol the area. Martha hesitates, though, and that leads to big trouble ahead.

In the early 1960s, TV veteran Clint Eastwood had to go to Europe to break out big in Sergio Leone's spaghetti Westerns. When he returned, he teamed with Don Siegel to make Coogan's Bluff, in which a deputy sheriff from Arizona goes to New York in search of a killer. Siegel's riveting, mid-tempo style of action suited Eastwood well, and they paired up again on Two Mules for Sister Sara, also starring Shirley MacLaine in a Western that was anything but traditional.

I first saw both those films, plus The Beguiled, when they were broadcast on network television, edited for time and censored for content, in the mid-1970s. Of those three, Coogan's Bluff was the only one that met my expectations of Eastwood as a larger-than-life hero. 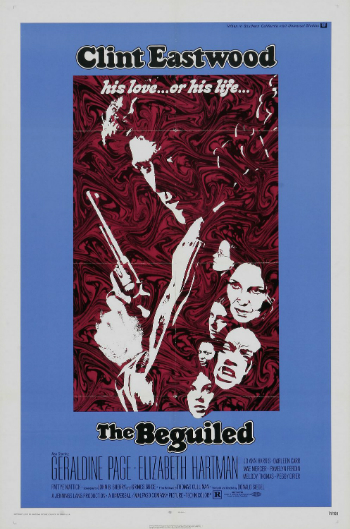 Watching The Beguiled again recently on HBO, uncut and uninterrupted by ads, was a much more satisfactory experience, especially from a visual perspective. Bruce Surtees, who'd been a camera operator on both Coogan's Bluff and Two Mules for Sister Sara, made his debut as director of photography and did a beautiful job.

Candles are the only apparent source of light in the nighttime interior scenes, which reinforces the period setting and lends those sequences an air of mystery. The outdoor sequences, shot on location in Louisiana, reek of thick moss, contributing to the trapped circumstances of the characters.

The supporting performances hit their marks accurately, from Ferdin as the young, devoted Amy to Darleen Carr as the more conservative Doris to Jo Ann Harris, my personal favorite, as the over-heated Carol. Mae Mercer cuts a strong figure as Hallie, a slave who is growing tired of containing her rage.

Geraldine Page is very, very good as Martha, a woman haunted by her past but determined to control her future. Elizabeth Hartman does her very best with a role that is underwritten and ultimately frustrating; it's difficult to ferret out her true motivations after everything she's seen.

As for Eastwood ... well, it's a tougher proposition. In the time period in which it was made, Eastwood was still developing as a dramatic actor and could not hit every note for which he reached. The script was also confused on his character, and perhaps director Siegel was as well. McBurney is meant to be a hero, I think, and he doesn't always tell the truth because a prisoner of war's first obligation is to escape.

So, from that perspective, McBurney's lies and deceptions are understandable and well motivated, no matter that the women are easily persuaded and (mostly) gullible. (The title proves to be quite accurate.) That introduces another uncomfortable factor that runs throughout: a queasy current of dawning sexuality. Martha and Hallie have been separated from their male partners for some time, while the younger women are, appropriate to the era, all virgins and thus susceptible (?!) to McBurney's roguish charms (???!!!).

If that assumption is not sufficiently risible, things get even more hazy is in the second half of the story, where the motivations of nearly everyone come into question.

In other words, The Beguiled is more layered, even more problematic -- and open to interpretation and later repudiation -- than I had anticipated, so I am very much looking forward to Sofia Coppola's reading and presentation of the material.

Eastwood and Siegel followed this up with their reactionary smash hit Dirty Harry, which changed quite a few things on the cinema landscape. They worked together for their fifth and final time on the tight, terrific thriller Escape From Alcatraz. Eastwood also made his directorial debut in 1971 with Play Misty for Me, which opened another creative door for him that is still paying dividends today.

Geraldine Page eventually earned an Academy Award for her performance in The Trip to Bountiful shortly before she passed away in 1987. Nominated for an Oscar for her debut role in 1965's A Patch of Blue, Elizabeth Hartman left the business in 1983 and took her own life four years later.

I wouldn't call The Beguiled a must-see movie, necessarily, but it's wormed its way into my subconscious and is certainly a fascinating, weird experiment in the Southern Gothic cinema sub-genre.

Do you feel this content is inappropriate or infringes upon your rights? Click here to report it, or see our DMCA policy.
70s RewindClint EastwoodDon SiegelElizabeth HartmanGeraldine PageJo Ann Harris