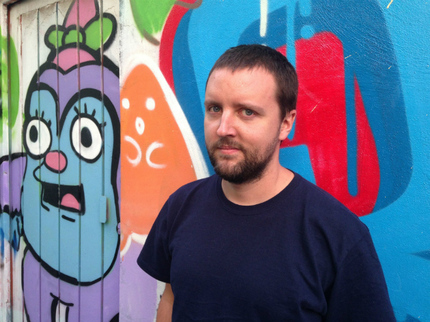 With his latest, deviously disturbing horror film, Scherzo Diabolico, now infecting VOD platforms everywhere, writer/director Adrian Garcia Bogliano is plotting his next move. And it's taking him to Sweden.

Christina Lindberg -- yes, that Christina Lindberg, the one who memorably starred in Thriller/They Call Her One-Eye (1973).and inspired Quentin Tarantino to make Kill Bill -- will star in the film, titled Black Circle. The film "follows the story of two sisters whose lives change dramatically after going through hypnosis using a mysterious vinyl album recorded in the 1970's."

It's of note that the filmmaker is also a huge aficionado of music from that period, hosting a radio show that, whenever I've listened to it (in Spanish), is enlightening and features a frightfully weird selection of unknown pleasures. Speaking exclusively to ScreenAnarchy, he added:

"It's an independent, high concept horror film. Black Circle is a drama with supernatural elements. It's a film driven by a psychological conflict that becomes visible, tangible and extremely dangerous. Being a fan of the horror genre, I always try to use it as a springboard for themes that I'm interested in portraying. In this case my focus is on the ideals of perfection and success and the loss of our essence trying to achieve those goals. It's also about the struggle with the worst, most horrifying part of our nature once it surfaces." "I loved the opportunity of making something with cult favorite Christina Lindberg and I think Adrian's vision for the film is a unique one", explains Mikko Aromaa, CEO of Tenebrae Enterprises and Head of Acquisitions of Night Visions Distribution, after closing the deal today with Joshua Sobel's F, the production company behind two films premiering at the Marché Du Film this year, Rotstein Brothers' Terror 5 and Xander Robin's Are We Not Cats.

"We are thrilled to be teaming back up with the twisted minds of Adrian Garcia Bogliano and Andrea Quiroz Hernández to support their next vision, Black Circle. The script is mesmerizing and I cannot wait for audiences to be hypnotized by Adrian's latest horrific tale," said Joshua Sobel about the film.

The cast of Black Circle also includes high profile, award-winning Swedish actors like Mathilda Paradeiser (She Monkeys), Hanna and Erica Midfjäll (I Miss You), Madeleine Trollvik (Johan Falk) and the singer Johan Palm, among other names to be announced.

Black Circle follows the story of two sisters whose lives change dramatically after going through hypnosis using a mysterious vinyl album recorded in the 1970's.

Bogliano commented on the film: "It's finally my opportunity to work with Christina Lindberg who has been one of my favorite actresses for many years. She has an incredible presence and we're getting an amazing cast and unique locations, that will make this movie something very different from anything you've seen from Swedish genre films".

Also on board for the project, besides Sobel and Aromaa, are A Field in England's executive producer Pete Tombs and The Greasy Strangler's producer Andy Starke for UK's Mondo Macabro. The Swedish company Solid Entertainment, whose other credits include genre films such as Wake Wood and Stitches, are also joining the production.

Rickard Gramfors and his partner Bo Gramfors are producing the film for Sweden's Klubb Super 8 in their first approach to genre film in association with Scherzo Diabolico's producer Andrea Quiroz Hernandez with her Mexican company Salto de Fe Films.