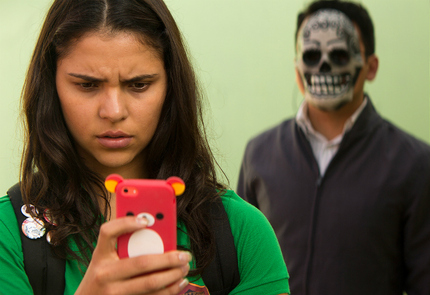 The latest horror outing from director Adrian Garcia Bogliano (Here Comes the Devil, Late Phases, Cold Sweat and Penumbra) will soon be haunting the U.S. and the first trailer has been released.

Set for release on May 3 via a variety of Video On Demand platforms, Scherzo Diabolico concerns a teenage girl (Daniela Soto Vell) and an accountant (Francisco Barreiro, Here Comes the Devil). Things are not going well for the accountant. He's under extreme pressure at work and at home, and he's driven to do terrible things in an effort to relieve his stress. That leads to him snatching the girl, but things do not go as he plans.

The trailer, which debuted via EW, looks extremely dark, but the director provided a little more insight into his intentions: "The comic elements are there but they are weird. You don't know whether you should laugh or not. To me, the biggest inspiration in that sense is the Coen brothers. I mean, Fargo is a black comedy but when you see the film you probably laugh two times in the whole movie."

With that in mind, check out the trailer below, and then mark your calendars to watch the movie in its entirety on May 3.

Do you feel this content is inappropriate or infringes upon your rights? Click here to report it, or see our DMCA policy.
Adrian Garcia BoglianoDaniela Soto VellFrancisco BarreiroAdrián García BoglianoJorge MolinaMilena PezziComedyHorrorThriller