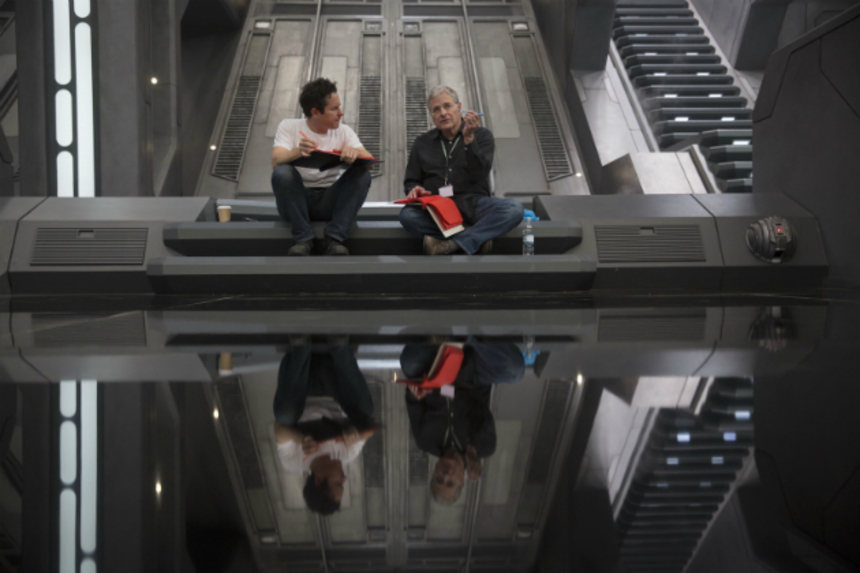 Will the real J.J. Abrams finally be revealed in Star Wars: The Force Awakens?

Abrams has directed five films, four of which have been franchise installments. So far, the only one that has felt personal is Super 8. He followed that up by returning for Star Trek Into Darkness, which struck me as a hollow effort, and then, after turning down the opportunity once, accepted the challenge of making the first in a series of new Star Wars films.

Academy Award winner Michael Arndt (Little Miss Sunshine), hot off Toy Story 3, was hired to write the script in November 2012, but that didn't work out, and about a year later Abrams began collaborating with Lawrence Kasdan on a screenplay that was needed as soon as possible, since pre-production had already begun. Out of similar unlikely circumstances, some wonderful films have been born. And it may be that in such pressure-filled weeks, Abrams and Kasdan conjured up personal stories, hopes and fears, dreams and nightmares that will light up the screen when the movie finally opens on a billion screens across the universe later this week.

The less optimistic may insist that both writers were compromised by the time-crunch and by the overwhelming force of expectations from the studio -- hello, Disney! -- and the resulting "product" will make hundreds of millions of dollars while not satisfying a single discerning soul.

Whatever. More than most blockbusters, Star Wars: The Force Awakens is a movie that will be very difficult to evaluate after one viewing. The first responses will be fascinating to behold, although I imagine that a good number of people will wait until they've had a chance to experience it for themselves before they want to hear what other people think.

My own personal history with the Star Wars cinematic universe will no doubt influence my viewing of the latest episode, but I admit to more a little curiosity about J.J. Abrams' role and his possible influence on how the story is told. Obviously he's had the prior experience to know that he needs to balance visual effects and beloved characters, but will he be doing anything to make it his own?

Based on his first three films, I would have said, 'Maybe.' Add in his fourth (Star Trek Into Darkness), and I'm leaning toward, 'Probably not.' There's simply scant evidence to the contrary. He's a maker of clean, efficient blockbusters that tell good stories and are generally faithful to the spirit of the franchises involved.

But that doesn't mean that Star Wars: The Force Awakens will be a failure from a creative standpoint. Kasdan, at his best, has been a marvelously inventive writer -- he's especially good with witty one-liners -- and Abrams has a keen sense of what works in a visual-effects world.

The new movie will never live up to everyone's expectations, but it has a good shot at being the most crowd-pleasing release of the season. And by that I don't mean financially. Rather, I'm hoping for a wide-eyed adventure that rekindles possibilities.

Maybe that would reveal the real J.J. Abrams.

I wrote at much greater length about Abrams in connection with the release of Super 8 in June 2011, which you can find below. Super 8 demonstrates that J.J. Abrams has not yet escaped the gravitational pull of his creative inspirations. If Abrams has something more original and/or more personal to say, it's time for him to stop playing his cards so close to his vest. It's only the third feature film he's directed, but he's about to turn 45, and the clock is ticking.

To be fair, Super 8 is a lot of good-spirited fun to watch, the kind of blissfully light summer entertainment that so many of us remember fondly from our youth. Abrams, who wrote and directed, borrows freely from the beloved and highly influential Steven Spielberg, who gave his blessing by serving as one of the film's producers. Depending on your age, the obvious homages begin with E.T. The Extra Terrestrial and then move either forward into the 80s (Explorers, The Goonies) or backwards into the 70s (Jaws, Close Encounters of the Third Kind), with any number of influences from other cinematic eras acknowledged either explicitly or implicitly.

Now, there's certainly nothing wrong with making an affectionate tribute to a favorite filmmaker, especially one that's character-based, dynamically-paced, and well-crafted. For a reality check, however, compare the third feature directorial effort of Spielberg (Close Encounters of the Third Kind) or Joe Dante (The Howling). Criticize those movies all you want, and feel free to point out all the influences that are present. But both reflect recognizably different directors at work, feeding off their own individual backgrounds and ambitions. Watching Super 8, good as it is, feels like a more anonymous experience. What, exactly, is Abrams trying to say?

Maybe he doesn't want to say anything, beyond providing a touchstone to shared memories. (We'll leave aside certain wince-inducing moments in the third act.) Invoking nostalgia for its own sake is a time-honored tradition, but it's proven to be quicksand for Spielberg ("Kick the Can," his episode in Twilight Zone: The Movie), while Dante, who has played more often with the ideals of childhood and adolescence, transcends the trappings to comment on larger issues ("It's a Good Life," his episode in Twilight Zone: The Movie, as well as the aforementioned Explorers and, later, Small Soldiers).

Spielberg had several years of experience as a television director; Duel is terrific and stands on its own merits as thriller, made for TV or not. Dante had done his share of yeoman service as an editor for Roger Corman. Abrams, of course, didn't just fall off a turnip truck and into the director's chair of a big-budget movie. He and his friend Matt Reeves made movies with a Super 8 camera, which led to an article in the Los Angeles Times, which led to the teens being hired by Spielberg to repair Super 8 movies the director had made in his youth, which led to Abrams' first credit as a composer at the age of 16. (All that is nicely detailed in a recent interview with The Washington Post.)

Later, Abrams became a screenwriter, with credits for 1990's Taking Care of Business (he was still just 24) and the higher-profile Regarding Henry and Dying Young the following year. In the late 90s he got into television with Felicity and then Alias. He got his feet wet as a director on those shows; Abrams says that Tom Cruise hired him for Mission: Impossible III based on Alias, which makes sense. But Abrams really showed what he could do with the pilot for Lost, a very good, spooky and atmospheric start to the series.

M:I 3 was a crisp, efficient thriller, if somewhat anonymous. Writers Roberto Orci and Alex Kurtzman became involved with the Star Trek reboot, and Abrams came on board, initially as a producer. He ended up directing as well, and Star Trek was a grand success, pleasing (for the most part) critics, mainstream audiences, and die-hard Trekkies.

Shortly before the release of Star Trek, a writer for The New York Times commented on the "conscious effort to inscribe this 'Trek' in the storytelling traditions popularized by Joseph Campbell, in which heroes must suffer loss and abandonment before they rise to the occasion. The filmmakers admit that this is a deliberate homage to their favorite films, like 'Superman,' 'Star Wars' and 'The Godfather Part II': epic movies that, by the way, did pretty well at the box office." [Italics added.] It's not a direct quote, but that statement may provide a clue to Abrams' intention with Super 8.

Flying solo as a screenwriter, just like Spielberg with Close Encounters (though others reportedly contributed to Spielberg's script), Abrams returns to his youth in Super 8. It's a movie version of his life, of course; he grew up in Los Angeles, but the movie is set in the fictional small town of Lillian, Ohio, in 1979.

Joe Lamb, his presumed alter-ego, is an only child who has lost his mother in a steel factory accident. Joe is best friends with Charles, a budding director; together with three other friends, they set off to shoot a scene for their latest zombie opus at a lonely abandoned train station in the middle of nowhere. Charles has recruited Alice (Elle Fanning, who is terrific), a slightly older girl, to drive the gang to the location and act in the movie. Alice, spirited, angry, and sad, throws an electric, pubescent erotic charge into the proceedings. Filming commences. When a freight train unexpectedly looms on the horizon, the excited teens scramble into action. The train crashes, something escapes, and strange things start happening in town.

The plot develops in a manner that will be quite familiar to those who have already seen the films mentioned above. What's missing is the broad streak of originality that made those early films by Spielberg and Dante more compelling than mere cinematic mix-tapes: the insane mess that Richard Dreyfus makes in his home, driving away his family (his wife! his kids!); the insane fright of watching a man transform into a werewolf in front of your eyes.

Super 8 is warm and inviting and easy to recommend. Beyond that, it feels that Abrams is tracking a course to be a kind of family-friendly Quentin Tarantino Lite, paying homage to the old masters without adding much of his own soul.

Maybe it's asking too much. Abrams has the ideas and he has the skills; it remains to be seen whether he can pull a rabbit out of his hat and actually surprise us.