70s Rewind: STAR WARS Memories, What Are Yours? 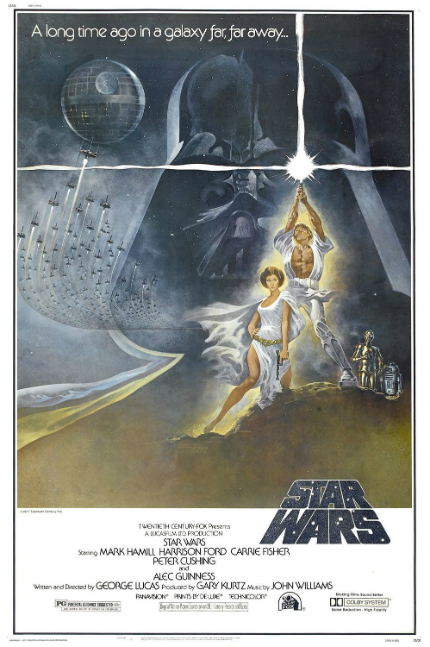 Frankly, this is a slow news day, even on the international front, so I'm bowing to the Force and sharing my 'first time watching Star Wars experience,' in the hopes that you'll have something better to share in the comments section.

So I was primed for the opening of Star Wars on May 25, 1977, especially with the publicity blitz that accompanied it. But that was a Wednesday, a school day, and I couldn't possibly go until that Saturday, May 28. (Of course, my friend R. cut school on Wednesday to go and reported to us on Thursday his supreme disappointment at the 'unresolved' ending. Small wonder that he ended up as an extremely accomplished engineer.)

Anyway, my other friend S. and I boarded a bus from the San Fernando Valley in Los Angeles and headed to Westwood, a neighborhood about 10 miles aways that surrounded the U.C.L.A. campus and was a hotbed of movie theaters and restaurants back in the day. The movie was only playing, as I recall, in Hollywood and Westwood, so we went to the Avco Cinema Center and joined the amazingly long line that snaked through a parking lot.

We waited more than three hours, not talking much, just bubbling with excitement. When we were finally granted access to the theater, it was already jam-packed, but somehow we found two seats together at the back of the auditorium. Moments later, the presentation began.

John Williams' opening theme sounded amazing in Dolby Stero, better than anything we'd ever heard before. S. and I exchanged proper looks of shock. Then a small spaceship appeared, chased by another ship that went on forever. We'd heard about this shot already, but still ... we exchanged raised eyebrows and then our eyes were glued to the screen.

Sure, we recognized the story from the 'space operas' we'd forced ourselves to read earlier in our teenage fandom, the line between heroes and villains was very, very broad, and the dialogue was very, very stiff, and we knew that in space, no one can hear your ship zoom by or stuff explode, but still ... we were enthralled, and very, very happy on the bus ride home.

When I returned hom late that afternoon, filled with excitement, my father looked up from the living room chair where he sat reading the newspaper. "How much did it cost?" he asked. I told him: $3.50. (Admittedly, a new high price in movie ticket costs.) My father made a face. "For one movie? In my day, we could see two movies, and a newsreel, and a cartoon, for 5 cents!"

But I didn't care. I'd seen Star Wars and it was very, very good.

Now, what was your first experience? Or have you managed to avoid seeing any of the Star Wars movies to date?

40 years ago in theaters not so far, far away.... #StarWars40th pic.twitter.com/6rpMMegQUY