Destroy All Monsters: Whedon vs. Abrams 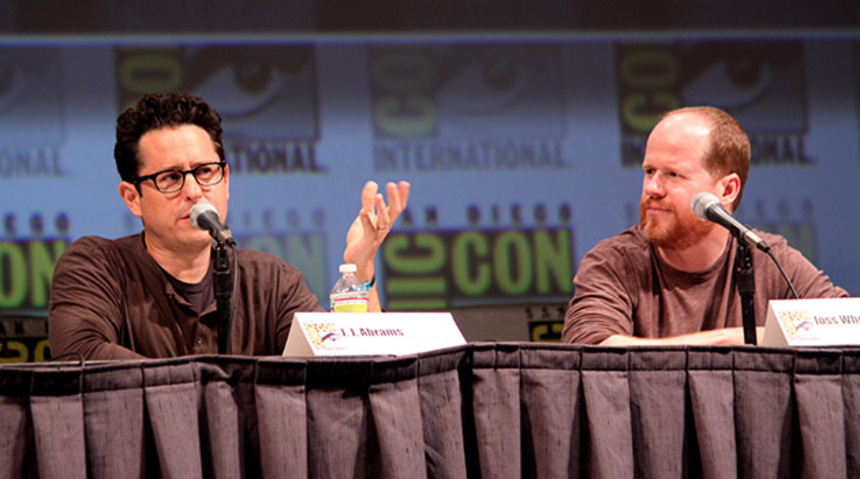 Last week, Joss Whedon quietly confirmed that he has finished his deal with Marvel Studios and won't be participating in any more of their movies. This wasn't a surprise. Frankly, even given the degree to which hiring Whedon to make The Avengers seemed like fanboy-casting-come-true, keeping him around the studio for not one, but two blockbuster films (plus unspecified consulting duties on the rest of MCU Phase 2) seemed slightly miraculous. The guy isn't a mainstream, studio guy.

His pre-Avengers track record, unfair though it may seem to his fans, proves the point: a string of cancellations, near-misses (have you read that Wonder Woman script?), and underperformers, more darling to graduate thesis writers and his cadres of fans than to the modern ticket-buying public.

Whedon is off to do what Whedon does: creator-driven projects with no ties to pre-existing properties, which will probably make no money and get cancelled by Fox. The Avengers war-chest is his retirement money.

Meanwhile, as was much more widely reported, J.J. Abrams' Star Wars: The Force Awakens passed Avatar to become the top-grossing domestic film of all time, in unadjusted dollars. I'd say it now has about a 50/50 chance at beating Titanic in global take, and no chance whatsoever at topping Avatar worldwide, so the story on "how much money can a good Star Wars movie with good word-of-mouth make?" is just about written. The answer: a lot.

The more I dig into the making of The Force Awakens (The Art of Star Wars: The Force Awakens is a good place to start, and forthcoming Blu-rays, making-of books, and Cinefex issues will help), the more convinced I become of something fairly intrinsic:

This was the hardest movie, maybe ever, to pull off.

We award merits of difficulty in different ways when we talk about making films. The Revenant is gathering Oscar buzz like flies around Leo's shit-stained face right now, because yeah, making that movie that way was a monumental challenge of physical production. Dragging a steamboat over a mountain is hard, too; as is filming in a flooded nuclear reactor under water so chlorinated it turns human hair white. I'm not taking anything away from that kind of "difficult" filmmaking.

But in all of its successes (and the inevitable laundry-list of gripes that will populate the comments section of this article within minutes of posting, by the phalanx of Internets who need to stand up for their personal opinions on why this Star Wars movie just wasn't good enough, as though that has anything to do with my point), The Force Awakens paints a mental picture of an unbelievably deft job of creative stewardship.

J.J. Abrams, or more accurately his whole team, danced between the moonbeams of an almost unbelievable number of potential pitfalls in making this project, in order to arrive at the profit-driver I described above: a good Star Wars movie with good word-of-mouth.

(For contrast, consider Avengers: Age of Ultron - a good Avengers movie with disappointing word-of-mouth. In this weird game of expectations and "over it" hipsterism, "big" and "too big to fail" usually seem oddly, inversely proportional. The Force Awakens, possibly the biggest movie ever made, even overcame that.)

Again, on The Force Awakens, your mileage may vary. I'm not here to argue its merits. But when you begin to gather a mental scope of the sheer process of creating, from whole cloth, a new launchpad for a decade-plus of Star Wars franchises which must satisfy three separate generations of Star Wars fans, the number of smart, unbelievably complicated decisions that Abrams had to make from inception to release is mind-boggling.

And to have made so many of them correctly enough to arrive at this result? Applause all around, and I say that as someone who spent more than his share of the past two years vocally, and as it turns out quite wrongly, doubting every single step along the way.

Here's the real heart of the thing, though: Abrams never complained about any of this. He never, in fact, acted as though he were doing anything other than what, it turns out, he was actually doing: living out a closely-cherished, lifelong dream.

J.J. Abrams and Joss Whedon have long been connected in my mind. They have had weirdly similar career tracks: early days writing (or re-writing) screenplays for Hollywood. Initial personal success in genre television (more often than not with strong female lead characters). Graduation to stewardship of the biggest franchises in Hollywood (though Abrams, with his Mission: Impossible / Star Trek / Star Wars run, got a belt of experience that Whedon never did).

And as a fan, I must admit that I've always considered Abrams a poor-man's Whedon. Or, perhaps more accurately and less kindly, the casually populist version of a truly innovative creator.

Part of this was driven by pure my-team/your-team frustration. I was (and am) a Whedon guy, through and through. And as mentioned above, the majority of Whedon's reputation was built on projects that were astonishingly unpopular in the mainstream.

He was the original geek creator who wrote more fan languages than Tolkien and Lucas combined, and yet saw his television series never bubble up further than "on the bubble," his feature film debut earn less than its budget back in theatres, and seemed to be heading into a world where a couple of prestige runs on comic book titles and a geeky webisode musical was about the most successful he was going to get.

Abrams, on the other hand, has been on a nearly unbroken uphill climb since Felicity (leaving one to wonder where he could possibly go from here, aside from leading our first colonization mission to Pandora or something). If LOST and Alias and the Star Trek reboot don't quite have the kind of resounding pop cultural pliancy of, say, Buffy the Vampire Slayer or Firefly, they certainly have more than Dollhouse or Much Ado about Nothing. And the score is pretty much settled now anyway, cuz FinnPoe and Emo Kylo Ren are everywhere.

Seeing Whedon's comments about leaving the Marvel universe behind this week, I was reminded of all the avowed, exhausted griping he did last summer, around the time the movie was released (and shortly prior to his quitting Twitter). He distanced himself from the Marvel universe as often as he embraced it, and would describe in detail about how immensely challenging he'd found the experience of making his two Marvel movies.

I've no doubt that they were. As I've commented previously, any feature film on the scale of an Avengers or a Star Wars is less a creative enterprise than a strategic project, and the director is less the author than the accountable project manager, trying to land a very chaotic and idiosyncratic thing on a runway of expectations without a bump.

But. I'd also argue that the order of magnitude of difficulty between pulling off an Avengers sequel, and setting up the new Star Wars franchise, are roughly 12 parsecs apart (possibly even 14).

And again: here's Whedon, talking about the weight of his burden; and here's Abrams, behaving like a 12-year-old making a Star Wars movie on (newly minted) Super-8.

One of these directors was clearly made for the world he has now conquered. The other is probably safer going back to comic books and handmade television shows that small, passionate fanbases will watch, under the radar of everybody else.