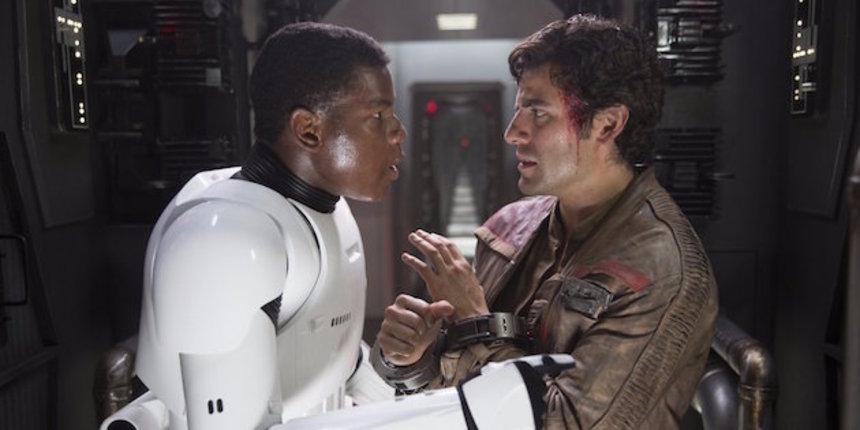 Like most fans of Star Wars: The Force Awakens, I found the relationship between John Boyega's Finn and Oscar Isaac's Poe Dameron to be one of the film's most charming aspects. As soon as they'd uttered their enthusiastically mutual "nice to meet you's!" in the stolen TIE Fighter, I would happily have signed off to watch a whole trilogy that was just about the former stormtrooper and current Resistance pilot stealing shit and blowing other shit up.

The warm affection between the two characters has also allowed a large sector of the film's fans, through social media and elsewhere, to demonstrate how and why shipping, or more specifically slash fiction, happens. Absent any canonical representation in a saga that has, with The Force Awakens, made admittedly great strides in the inclusion category, LGBTQ culture jumped on Finn/Poe as an opportunity to represent themselves.

And so the memes have flowered wherever flowers take root, up to and including frame-by-frame analyses of the manner in which Dameron bites his lower lip while appraising how well his jacket fits on his new best friend.

Now, I am not so blindly optimistic as to think that Disney and Lucasfilm will canonize a gay relationship in a forthcoming Star Wars film; or at least, probably not in the next two or three. Mark Hamill's recent acknowledgement that with no canonical evidence to the contrary, Luke Skywalker's sexual identity is currently up for grabs to whatever fan wants to identify with it, is probably about as good as it gets in this decade.

But regardless of whether Episode VIII concludes with the Rey-Finn-Poe triangle breaking with Finn and Poe running off together hand in hand while Rey adopts the ascetic Jedi life, or (better yet, in my opinion) foregoes the romance angle altogether on the baseline theory that, perhaps, with its first female lead character, Star Wars doesn't need to embellish Rey by defining which boy she wants to snog... I would still argue that the relationship between Finn and Poe has significant pop cultural importance, in ways having nothing to do with either character's sexual preference.

It has to do with the reason the Finn/Poe meme has gained so much strength so quickly: these two dudes are affectionate, honest, and entirely non-competitive with one another, in a way that almost never happens in Hollywood media.

Both men behave, throughout The Force Awakens, as though they exist in a world where the rulebook of contemporary gender codes simply doesn't exist. (They do: it's the world called Star Wars!) When do we see men swap clothes? When do we see men freely ask one another for help? When do we see men leap wholeheartedly into an embrace, without it being followed by some sort of embarrassed joke?

There is a kind of deeply coded homophobia in male heterosocial relations, both in the movies and out here in the real world; "that's gay" is one of the oldest behaviour modification devices that any male in North America is exposed to, and for many of us (this writer included), it might even serve as our introduction to the concept of homosexuality - presenting it from its inception as something Other, something undesirable, something to be avoided.

Even Han and Luke, the two best buddies of my childhood, never hugged; or at least, not until the very, very, very end of their trilogy. (To be fair, Han never seemed to like Luke much. Or anyone, actually.) There is a glimmer of affection in Han's eye as he discusses his absent best friend in The Force Awakens that is about as close as the character has ever come to acknowledging that Luke Skywalker is one of the most important people he ever met in his whole life.

Finn and Poe, on the other hand, are in it together from pretty much the moment they look into one another's (non-visored) eyes. It arguably happens too quickly, even in the berserk staccato of character development in a Star Wars movie. But when one is escaping from a Star Destroyer, I suppose, time is short.

And, critically, Finn and Poe don't compete. About anything. All the earmarks of typical alpha maleness - of typical Earthbound "masculinity," if you will - are not there.

There are no male egos at play in the relationship at all. Circumstances are dire enough, one presumes, that neither man feels like a dick-measuring contest is advisable (or necessary). They aren't fighting over a woman; they aren't fighting over who's a better pilot (Finn's sole comment on that subject is that Poe is, indeed, one hell of a pilot); they aren't standing around arguing about why Chewbacca didn't get a medal at the end of Star Wars, as though the decoration was the point.

Instead, they're fast friends, buddies who have one another's backs, and role models for emotionally engaged male relationships even in their criminally limited screen time. And if they're two gay men in love with each other, awesome; and if they're just two unapologetically bromantic straight guys, awesome. And if they help pop culture move to the point where all these possibilities are in the conversation, awesome. Lightsabres for all.

We've learned that Episode VIII has been undergoing some script polish in the wake of The Force Awakens' enormous success and, more particularly, the warm reception the fans have given the new film's new trio. I can only presume this means more of what made TFA work so well: more of Rey kicking ass with the Force; and more of Finn and Poe capering around the galaxy together, liking each other a whole lot, and not giving a single fuck who knows it.