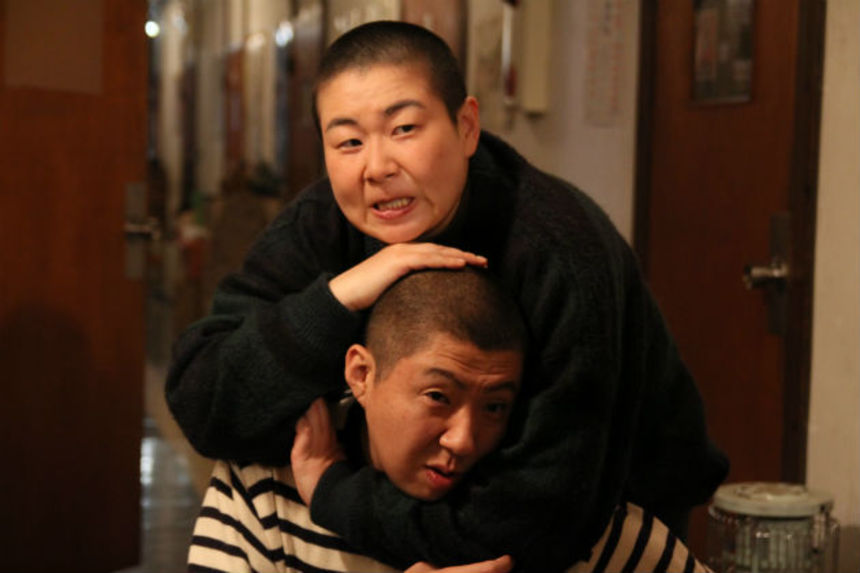 Fujita Yosuke's bittersweet comedy Fuku-Chan of Fukufuku Flats reflects on themes of loneliness and love but never loses sight of its comedy heart, thanks to a wonderful central performance from Oshima Miyuki.
Fukuda Tatsuo, 'Fuku-chan' to his many friends, paints buildings by day and solves the disputes of the off-kilter characters living in his apartment building at night. A kind-hearted man who goes out of his way to befriend and help those in need, it's hard to understand why Fuku-chan is so timid around women. All is revealed when a budding photographer named Chiho reenters his life, the architect of a terrible high school prank that destroyed a bullied little boy's confidence. Chiho is trying to atone for her past and sees an inner beauty in the outwardly awkward Fuku-chan, but it's unclear whether her reemergence will heal Fuku-chan's wounds or lead to further heartbreak.
While the casting of Oshima Miyuki is obviously interesting, Oshima being a well-known Japanese comedienne, the director must have seen something in her early comedic impersonations of old men and encouraged the actress to take this role and play it straight. Oshima's performance is absolutely central and the character forms the heart of the film as Fuku-chan forms the heart of the community in which he lives. The comedienne brims with openness and warmth and brings tenderness to the role while balancing it with the required crudeness of a working-class man's world. The comic actress showed some dedication by shaving her head and putting on weight to tackle the role, and many will be unaware they are not watching a male actor, which the film acknowledges with an amusingly tongue-in-cheek reference to the generous size of Fuku-chan's member.

While Fuku-chan holds the film together, the supporting cast of oddball characters add colour. From his old-fashioned ballad-singing young co-worker and the social misfit duo that live in his building to his oafish best friend Shimmachi (Yoshiyoshi Arakawa, star of Fujita's 2008 comedy Fine, Totally Fine), Fuku-chan manages to take care of the loneliness of others while struggling with his own secret.
The director has a background in theatre and he excels at highlighting the character traits and idiosyncrasies of the various players. While the cast is brilliantly odd, the film only slightly falters when it slips too far into the absurd. The humour is best when it's low key; a couple of extended comedy set-pieces, in a curry shop and photographers studio, slip too far into the ridiculous and proves that comedy is finest when it's based more in reality. That's not to say there aren't the occasional flourishes into the surrea,l but these fit more in with the film's off-kilter style.
Fuku-chan of Fukufuku Flats has enough laughs to make it work as a comedy but it's the drama that gives it substance. While it risks heading into darker territory towards the end the drama never drowns out the comedy or descends into mawkishness. A sweet and funny film, it's a delight to spend time in the company of Fuku-chan and the quirky outsiders he collects around him.
The film recently screened at the 2014 Okinawa International Film Festival. Visit the festival website for more information.