Now On Blu-ray: GREATFUL DEAD Is AMELIE For The Revenge Crowd 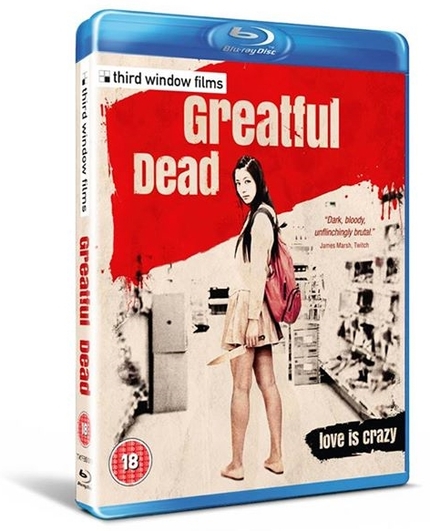 Uchida Eiji's Greatful Dead is another in the ridiculously long line of solid releases from the UK's Third Window Films.
The film, which focuses on a woman named Nami who obsesses over the lives of solitary figures that she finds in the world around her, is one of those hard-to-categorize films for which Third Window's Adam Torel has a soft spot. Not quite horror, but not quite comedy, and certainly never a horror-comedy, Greatful Dead gracefully toes the line between the two, creating an unique tonal mash-up that will appeal to fans of offbeat cinema.

Our own James Marsh reviewed the film out of Fantastic Fest in 2013, and this is part of what he had to say:

At the centre of the film, however, is Nami, wonderfully performed by relative newcomer Takiuchi Kumi. In the film's first half, her endearingly kooky behaviour effortlessly wins us over, even as she flaunts her newfound wealth (following the death of her father) and latches onto members of the community in an unhealthily obsessive manner. She is beautiful, intelligent and good-natured, traversing the city on her bicycle, as if she hadn't a care in the world. Why wouldn't we be quickly won over? [...]

The combination of Uchida's slick no-nonsense direction, layered, socially-aware yet genre-literate script and Takiuchi's excellent central performance, result in a smart package that should finally see Uchida recognised outside his own country and encourage the exploration of his back catalogue by a wider audience. If nothing else, Greatful Dead will certainly guarantee that whatever its director and female lead turn their hand to next, it will be enthusiastically followed by their newfound overseas fanbase. Dark, bloody, unflinchingly brutal, yet also laugh-out-loud funny, genuinely touching and with a profound social conscience, Greatful Dead is the real deal.

I do agree with his assessment, though to put a finer point on it, Greatful Dead is what might happen if Amelie were a cheerfully cynical sadist, a woman who enjoys her voyeruism and the minutiae of the lives of others until it hits too close to home, at which point she gets very personal.
The final reel of Greatful Dead will line up pound for pound with the best of the recent Korean revenge thrillers, but this film has a heart that many of those films are lacking. In fact, I'd line this up more closely with something like Memories of Matsuko in its gleeful disregard of tonal alignment. Truly a fun and original piece of work, Greatful Dead deserves the attention this release will hopefully bring, and I look forward to Uchida's future work.

Originally shot digitally, Greatful Dead looks appropriately crisp in HD. This release sports some great fine detail and is bursting with color. Toward the back end of the film when the color pallete shifts toward the darker side, the disc holds up nicely and doesn't lose anything in the shadows.
The audio, especially the bouncy score, is also top notch. The only extras included on the disc are the original trailer and an informative 20 minute interview with the director. Uchida's history as a Catholic makes for an interesting background story, as a large part of the central conflict comes when a Korean missionary (played by Breathless's Kkobbi Ki) appears on the scene to spoil the solitude of Nami's most fascinating "solitarians."

Overall, another fantastic release from Third Window. I can't wait to check out the rest of their 2015 lineup. It's a great time to be an Asian film fan, and no one takes as many risks as Third Window to bring us the best of the things you don't normally hear about.

Greatful Dead is now available on Region B (only) Blu-ray.