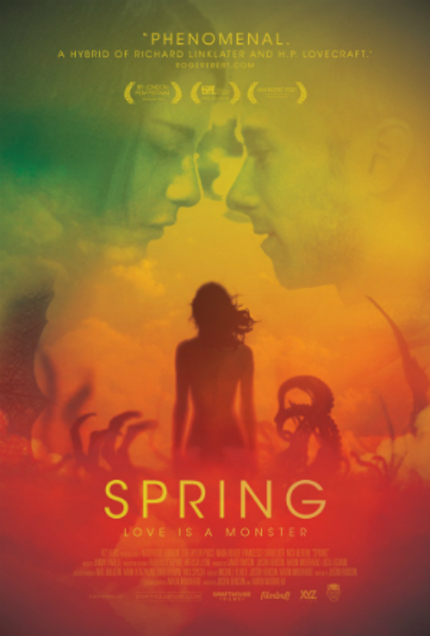 What's that? You're in Canada and hungry for the opportunity to see the best in edgy genre cinema on the big screen? Well, okay then. Raven Banner are bringing back their Sinister Cinema series of screenings across Canada and have announced the first two titles in the upcoming slate!

(Toronto, ON - May 2015) - Raven Banner Entertainment is pleased to announce Sinister Cinema's next round of dark, genre-bending titles.

Sinister Cinema brings a series of independent horror films to select theatres across Canada. The films include unique content (homegrown short films, special featurettes), and in some cases special appearances, including live question and answer sessions with directors, pre-recorded interviews and more.

The first line-up of films are:

Evan (Lou Taylor Pucci, Evil Dead, Thumbsucker) is a young American fleeing to Europe to escape his past. While backpacking along the Italian coast, everything changes during a stop at an idyllic Italian village, where he meets and instantly connects with the enchanting and mysterious Louise. A flirtatious romance begins to bloom between the two -- however, Evan soon realizes that Louise has been harboring a monstrous, primordial secret that puts both their relationship and their lives in jeopardy.

Zombies invade the Australian Outback in this brain-splattered, Mad Max-meets-the-undead thrill ride. When an apocalyptic event turns everyone around him--including his wife and daughter--into marauding zombies, everyman mechanic Barry (Jay Gallagher) arms himself to the teeth, soups up his car, and hits the road in order to rescue his sister, Brooke (Bianca Bradey), from a deranged, disco-dancing mad doctor. Bursting with high-octane car chases, crazy-cool homemade weaponry, and enough blood-and-guts gore to satisfy hardcore horror fans, WYRMWOOD takes the zombie flick to bone-crunchingly berserk new heights.

Both of these are great favorites around these parts - check the links below for previous coverage - and very highly recommended big screen experiences. Keep an eye on ScreenAnarchy for you chance to take part for free!