Now On Home Video: THE TREATMENT And RECKLESS From Artsploitation Films

Charlie Hobbs
Contributing Writer; Texas, USA
Tweet Post Submit
Artsploitation's July releases are in our hot little hands (a wee bit late, but that's on me, not them), and they are really solid films from North America's most confrontational distributor of contemporary world cinema. How do they stack up? Check out the details below regarding this pair of thrillers from Western Europe, Belgium's The Treatment (De Behandeling), and The Netherlands' Reckless (Bloedlink). 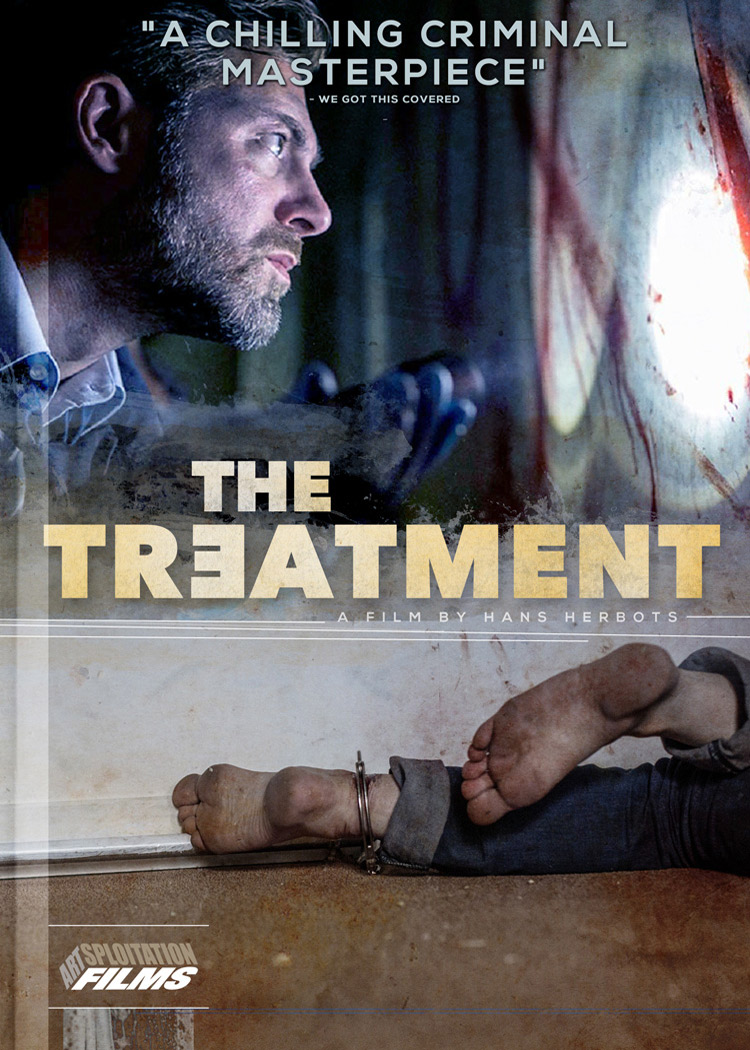 More than a little reminiscent in tone to recent Belgian export Bullhead, Hans Herborts' The Treatment is a gripping thriller that takes the audience on a maniac's trip through hell. The Treatment centers on the hunt for a serial killer and sexual predator who preys upon families with young children as a way to cope with his own inadequacies. The plot is not the engrossing part, however, it is the method behind the madness of both predator and prey that kept my interest.

This film was one of our favorite's from last year's Fantastic Fest line up, and Peter Martin more than adequately expressed his opinion here:

The cast is filled out with solid performances. The story and characters are drawn, adeptly, from a novel by Mo Hayder, adapted for the screen by Carl Joos. What really stands out to me, however, is the tone and atmosphere created by Hans Herbots. The feeling of dread has a cumulative effect that steadily becomes more unnerving.

With 20 years of experience as a director, much of it for television, Herbots has a strong grasp on fundamental storytelling, so it's easy enough to follow the (mostly) straightforward narrative. That frees the mind up to contemplate what's actually happening, to endure the often grueling incidents that are part and parcel of brutality that is far too common in modern society, and to ponder those terrors that we would never wish upon anyone.

A day after watching it, I'm still a bit afraid, frankly, to diagnose any further, exactly, the how and the why. This is a film whose impact has a ripple effect, growing ever wider with the passage of time.

Along with the obvious cultural connection with Bullhead, the film's bleak tone definitely makes this a must see for that film's fans. Not unlike Se7en, or even the mighty The Silence of the Lambs, The Treatment gives us a villain with depth, one with whom we can in now way relate, but can't quite find the strength to look away from his gruesome deeds. Herbots leads his detectives and his audience down a breadcrumb trail of depravity as we are witness to the true evil within the hearts of some men. Definitely a solid recommendation from me.

Like their previous Blu-ray discs, the initial printing of The Treatment came to me on BD-R, though I have been assured by the powers that be at Artsploitation that those are a thing of the past and we can look forward to duplicated, pressed Blu-ray discs. I'm not concerned with the issue, but I know it was a point of interest. The disc looks and sounds spectacular, as any modern film with digital origins should be expected to be in this modern day. No issues whatsoever with the A/V presentation of the Blu-ray.

In terms of extras, we are treated to several deleted scenes with commentary. The commentary does a good job of illuminating the job of the director and editors in determining just why these scenes don't fit. A common practice, but particularly well executed here. In addition there is a puffy piece on the film's premiere in Belgium with lots of pretty decent interviews of the talent involved in front of and behind the camera. Glitzy? Yes, but not altogether without merit. 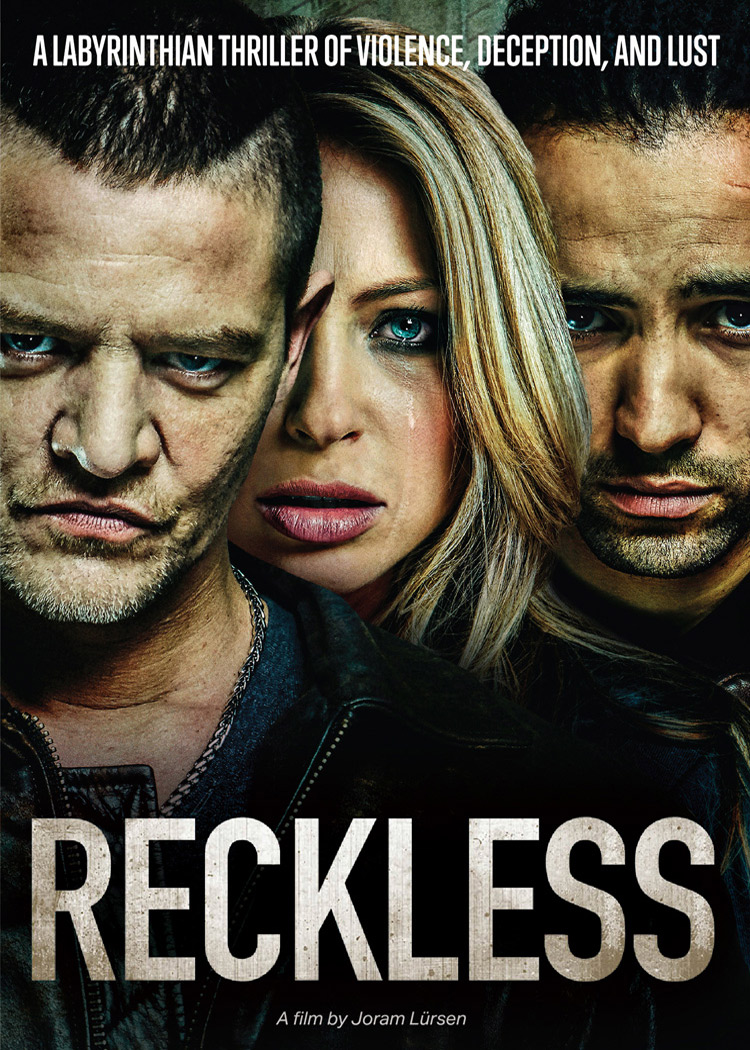 Dutch film Reckless is a remake of 2009 British thriller The Disappearance of Alice Creed, a film that I've not yet seen though it sits on my DVD shelf staring disapprovingly at me while I type this. This film comes to us from director Joram Lürsen, whose CV is packed with Dutch television work at numerous family films. I'll admit to never having seen any of those, either, but it seems pretty clear that Reckless is a major departure from his usual output.

Just in case you, like me, haven't seen Alice Creed, here's the gist. A pair freshly released ex-cons have made a plan to kidnap the daughter of an industrialist in order to extract a ransom and disappear forever under a cloud of money. However, when it turns out that one of the kidnappers knows more about the victim than he lets on, the shit hits the fan and no one is safe because no one can be trusted.

This brisk ninety minute thriller is an exercise in economy. A cast of only three performers, the two kidnappers Rico (Marwan Kenzari) and Victor (Tygo Gernandt) and the girl, Laura (Sarah Chronis) hold their own quite nicely in this film that is essentially a tense, violent chamber piece. The vast majority of the film takes place in a single location, an apartment modified to secure the loot, which gives Reckless an intensely claustrophobic feeling, which is compounded by the increasingly complex dynamics between the captive and captors as they all begin to unwind over the course of only a couple of days.

This brilliant staging (again, probably part of Alice Creed) eliminates distractions, focuses the plot and actions of the plotters like a laser, and doesn't give the audience a moment's rest. Reckless feels like the work of a filmmaker well versed in this type of cinema, though I can't be sure how much was cribbed from the original film, which makes me nervous to heap praise upon the director for what is, undeniably, a very successful thriller.

I really enjoyed it, and I will now to watch The Disappearance of Alice Creed and inevitably compare notes.

Reckless comes to us on DVD only from Artsploitation Films, though to my eyes it is perfectly satisfactory. The film isn't particularly flashy and doesn't rely on technical flourish to tell its story, so the disappointment is minimal. Colors and clarity hold up well, and the audio is direct and to the point with no issues to report. Unless there's a Blu-ray disc of Reckless somewhere out there in the Region A English speaking world, I can't imagine you'll find a better presentation of the film. Sadly, the only bonus feature is a trailer for this film and some other Artsploitation films.