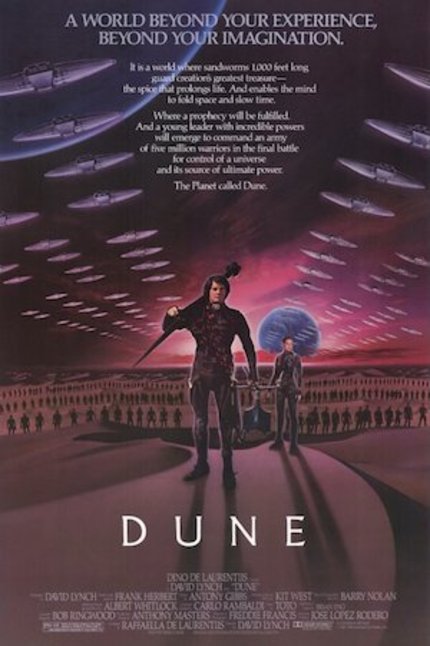 Jodorowsky's Dune, in all its crazy ambition, may never have come into existence, but in the early 1980s, David Lynch, after turning down the job of directing the second Star Wars sequel, then titled Revenge of the Jedi, got the go ahead to make a big budget blockbuster out of Frank Herbert's sprawling novel. The resulting film has befuddled and confounded audiences in the ensuing three decades, and has also achieved a significantly passionate cult following.
Willem (age 10) and Miranda (age 9) return to offer you an enthusiastic young perspective about the strangest of science fiction studio films. The marathon extended version with Alan Smithee given director's credit here is what they watched, and while they get a bit *SPOILERY* at times, there is far too much plot to make that too serious an issue - besides, you've seen Dune and adore it!  The kids talk unconventional space travel, tribal rituals, skin disease and intimidating girl-children while Miranda shows you how to make Baron Harkonnen pancakes
Twitch has been on the Internet so long that many of its writing staff have children old enough to understand and consume media in a way that is both raw and fresh. It might even come with an inkling of consideration afterwards and it's true that many of us fall in love with the movies when we are very young. Thus, we are offering you the perspective of smaller children as they react to seeing classic filmmaking on the big screen.
In the past, Willem and Miranda have discussed Kon Satoshi's Paprika as well as Alfonso Cuarón's Gravity and Jackie Chan's Police Story. Many of these these episodes, including a 15 film series on Studio Ghibli can be found in the archives of this site on the Kids Talk Film Channel on Vimeo.
Tweet Post Submit