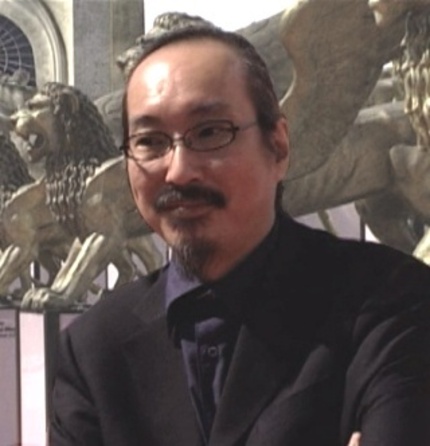 A week ago on Monday the 23rd of August, the famous anime director Satoshi Kon died of pancreatic cancer, aged 46. This news was the most startling item for me that day. I think it hit me harder than usual because I was a big fan of his work, I did not even know that he was ill and, let's face it, because he and I didn't differ that much in age either. You just don't expect anything like this. I always hoped I'd get a chance to interview him one day, maybe when he'd be visiting Rotterdam as a special guest of the Film Festival in the future, and now it will never happen.

So if this is how I feel, I can hardly imagine what the rest of Otaku worldwide must have felt upon hearing this news. Except for the shock of course, because I think we were all royally shocked.

And forty-six is so very young as well. In the last fifteen years, Satoshi Kon directed four films and a television series. It would have been more than twenty-three years until he was seventy. Who knows what we're all missing out on?

But four films and a series is what we have, so as a goodbye from ScreenAnarchy to Satoshi Kon, here is a short description of each. 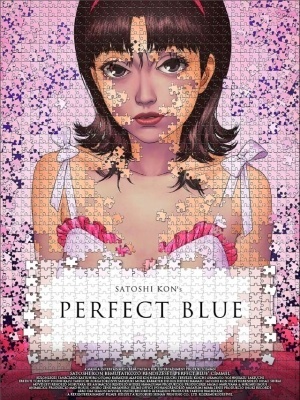 Mimi is a young singer who leaves her pop-music band to become a soap actress. This causes a change in her public good-girl image which is hard to swallow for her fanbase, especially when her newest acting roles require some controversial nudity. Almost cracking with stress and doubt, Mimi starts to suffer from blackouts. And things get really scary when people who helped with her career-change get murdered one-by-one.

In Kon's first feature film as a director he introduced two staples which would become almost a standard in his work. Firstly, the story featured a person with a split personality who perceives the world in a different way than is considered "normal".
Secondly, the animation adhered strictly to portraying reality. Satoshi Kon was even criticized for it, with people wondering why this was an animated film instead of a live-action one.
And indeed, as a thriller "Perfect Blue" has often been compared to the works of Alfred Hitchcock, and these are obviously a major influence, as are the wilder Italian Gialli of the seventies.

But staple number one actually makes for a damn good reason to film this story as an animation. The subtle (and not-so-subtle) changes in the world as seen through the eyes of people with a mental disorder look great when drawn, especially a morph to reality which happens in the finale. A shot which would probably have looked very hokey when tried in a real-live action film. 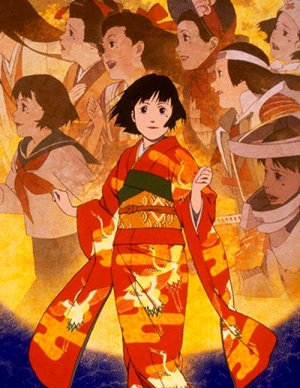 When an crew of reporters interview a famous old movie actress about her past, they get to literally travel through several stages of her life, showing an overview of twentieth century Japanese cinema but also how aging did (and didn't) change her as a person.

Far better received by critics than his first film, Millennium Actress showed the world that Satoshi Kon wasn't a one-hit wonder but a talent to be reckoned with. Again many felt that the animation was unnecessary, but Kon argued that the constant differences in age throughout the film in all the main characters would have been very difficult to do in real live. It would have become a make-up nightmare, so to speak. Also, this being an animated film made it easier to widen the scope of the story with flamboyant use of fantasy, and sets which would have been prohibitively expensive when done in real life.

But technical reasons aside, what stands out the most in this film though is not the animation or how it is used (although both are stellar), but the emotional core in the film and how successful it is in moving the audience. Kon showed he was a damn good storyteller, a damn good animator, and a damn good editor.

Also a very important new staple to Kon's work was added: a soundtrack composed by Susumu Hirasawa. There was an almost audible click between the two artists when they started working together. Miyazaki had Joe Hisaishi, Oshii had Kenji Kawai, and from this moment on Satoshi Kon had Susumu Hirasawa. The two would be linked as close collaborators ever since, and we were (and still are) all are the merrier for it. 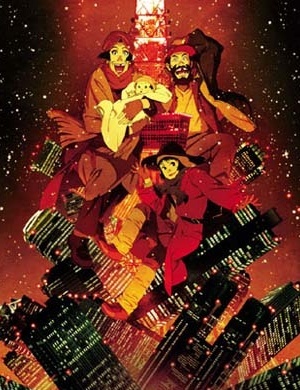 Close to Christmas in a snow-covered contemporary Tokyo, three homeless people find an abandoned baby and start on a quest to return it to the parents. On their journey they have to face not only their pasts and presents, but also a spate of near-deaths and miracles which keeps surrounding them.

Animation is expensive and homeless people a no-no taboo in Japan, so kudos to Satoshi Kon and studio Madhouse for having the balls to make this movie and distribute it. Especially since it mostly takes place in the seedy underbelly of Tokyo, full of bums, prostitutes, transvestites and people out to mug the aforementioned for fun.

But despite the heavy subject material this is probably the most lightweight of all of Kon's works. The whole thing plays like a French "Comedy of Errors", kept together by coincidence upon coincidence.
Rather than lazy scriptwriting this becomes more obviously a giant in-joke around which most of the film is anchored. Also it never portrays its three leads as saints, allowing them to shine despite their flaws, not because of them.
All of this makes "Tokyo Godfathers" a very watchable audience-pleaser instead of the sentimental tearjerker it so easily could have been. 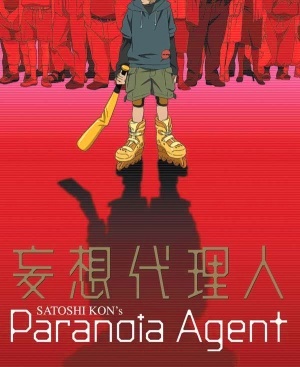 A young woman has to be hospitalized after being hit on the head. She claims the perpetrator was a youth on rollerblades carrying a baseball bat, but the police discovers the woman was under a great deal of work-related stress and may have fabricated the story to explain a self-inflicted injury. But other people also start to be hit by this boy, and soon "Shonen-Bat" (as he is called in the news) becomes a nationwide media sensation.
Apparently striking only those who are so desperate that they'll take any escape from heir dreary lives, the phenomenon becomes an epidemic in an increasingly anxiety-ridden Japan. But is "Shonen-Bat" even real?

A single-season series of 13 episodes, Paranoia Agent contains all sorts of bits and bobs which Satoshi Kon had spent time on but had not yet incorporated in (or had to cut out of) his previous films. He was also already toying with the idea of adapting Yasutaka Tsutsui's science-fiction novel "Paprika" as a movie, but when that project didn't immediately start a lot of its ideas were added into the mix for the series.
So in Paranoia Agent you see people hallucinate under extreme stress, one character struggles with a very severe case of Multiple Personality Disorder and a large part of the supplementary cast consists of society's drop-outs. All of which can be called typical for Satoshi Kon's body of work.

And after skipping "Tokyo Godfathers" Susumu Hirasawa returned as Kon's composer with a brilliant soundtrack. It capped each episode with stellar opening and closing credits music, and many wonderful pieces were strewn throughout the series.

I cannot recommend Paranoia Agent enough. The series forms a single gripping arc, although in the middle the series wavers and moves all over Japan, showing the escalating phenomenon without furthering the story any. Still, even the wavering part contains episodes which are absolute gems. One of the best being "Happy Family Planning", an episode that has fallen foul of the BBFC for portraying an internet suicide pact and which has made it impossible for the series to be distributed in the UK in an "Uncut" version. Quite possibly the most asinine of BBFC decisions, as the series is already rated "18 and above" and the part which had to be cut contains neither sex nor violence... nor swearing... nor discrimination... nor terrorist propaganda... nor religious fanaticism... nor any substance abuse... 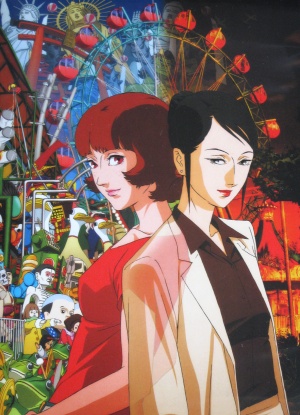 The stiff and reserved doctor Chiba is researching a device which allows people to enter each other's dreams. Secretly, she also cures people from nightmares and phobias using an alternate version of herself in the dreamworld.
This dream-avatar is Paprika, a superpowered mischievous girl (complete with freckles) who dares do the things that doctor Chiba herself doesn't. Yes folks, we have yet another split personality!
When the dreamsharing-device is stolen and used to drive people mad, doctor Chiba needs Paprika more than ever to solve the crime and save everyone's sanity.

Satoshi Kon had acquired both the blessings of writer Yasutaka Tsutsui and the collaboration of composer Susumu Hirasawa, and could finally commence with a dream-project of his (literally): the filming of "Paprika". With a budget the same size as he had for "Tokyo Godfathers" Kon managed to work wonders, creating an eclectic, hectic and almost impossibly detailed dreamworld for the story to take place in.

That story suffered a bit with especially the grand finale becoming a bit much to take in, but "Paprika" was Satoshi Kon's visually richest film yet. And the mad visuals are accompanied by a kick-ass score from Susumu Hirasawa, proving that the two indeed formed a team worth rooting for.


And this concludes my current list. Satoshi Kon's next film is "The Dreaming Machine", a title which sounds almost ridiculously well-suited for him. Word of mouth says the film was almost finished, but it is not known how much tweaking and editing Kon still had to do. Studio Madhouse has promised to finish the film and have it released in 2011. I'm waiting with bated breath, sad that it will truly be Satoshi Kon's last...
Sign-In to Vote
Tweet Post Submit