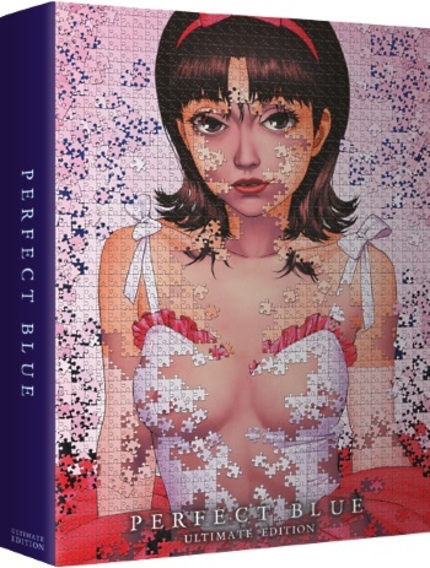 I'm a big fan of UK-based distributor Anime Limited and that is hardly a secret on the pages of this here site. The company isn't scared to take a risk or two and and even does flat-out crazy things from time to time, for which I love them. I mean: a pimped Blu-ray of the OLD Fullmetal Alchemist series? Check. Cowboy Bebop in a a large vinyl flight case? Check. The Vision of Escaflowne with three soundtrack CDs? Check...

So it's safe to say my ears prick up when I hear there's going to be a new Ultimate Edition released by these guys. And their next target is Satoshi Kon's Perfect Blue, a film I dearly love. It was Kon's first feature as a director, and he used the creative freedom of animation to bring his giallo-inspired tale of schizophrenia to an amazing life. The end result has been copied by anime and live-action films alike, from all over the world. Anime Limited has remastered the film, and includes two books (one of which a 384-page hardcover) and the CD soundtrack. You can check out their blog to see examples of just how much they have done with the film.

Now, these Ultimate Editions are rare and awesome, and unfortunately by necessity also quite expensive. That's life... but if you're interested in buying this edition, you can knock 30 pounds off of the price, if you do an early bird pre-order on Anime Limited's website before the 24th of March, and add PERFECTULTIMATE as a discount code. Just saying...


The Ultimate Edition of Perfect Blue is scheduled to be released on the 29th of April. There are currently no plans to release the remastered version of the film separately in a cheaper edition.