Pretty Packaging: The French PERFECT BLUE Is A Total Jawdropper

Ard Vijn
Editor, Europe; Rotterdam, The Netherlands (@ardvark23)
4
Sign-In to Vote
Tweet Post Submit
As part of celebrating 100 years of Japanese animation, French distributor Kaze released a special edition of Perfect Blue, Satoshi Kon's debut film as a director.
This happens to be one of my favorite anime. Satoshi Kon basically used the tropes of Italy's psycho-sexual "gialli" thrillers to create a unique perspective on extreme stress, and while many people wondered why this film is animated instead of live-action, it allowed for some seamless tinkering with hallucinations and illusions.

Released back in 1997, Perfect Blue has been a major influence for many directors, and is openly referenced (sometimes credited, even) in films like Black Swan and Requiem for a Dream.

Seven years ago, Satoshi Kon was unexpectedly diagnosed with pancreatic cancer and died a few months afterwards, at the incredibly young age of 46. I'd be hard-pressed to think of an artist whose passing I mourn more. I applaud Kaze's choice to use one of his films as an example of a highlight within a huge industry.

Of course, as a big fan I owned Perfect Blue already, it's not even the first time the film pops up in this series of articles, heh.... But the new French edition contained artwork books and was, while pricey, not terribly expensive. So I went for it.

It arrived yesterday and while I expected it, I didn't recognize it because of the size of the package it was in. I expected a regular boxset, but what I got was the size of a coffee table book. When I unwrapped it my jaw hit the floor and bounced a few times.

Now, a few words of warning: this set is French-friendly, not English-friendly. There are French dubs and subs, not English ones. On top of that, the Blu-ray and DVD are coded for Europe (region B and region 2 respectively), so if you buy this for the discs make sure your equipment can handle that.

Here is a gallery of shots. Click on the edge of the pictures to scroll through them, or at the center of each to see a bigger version. Which I recommend, because... well, feast your eyes! 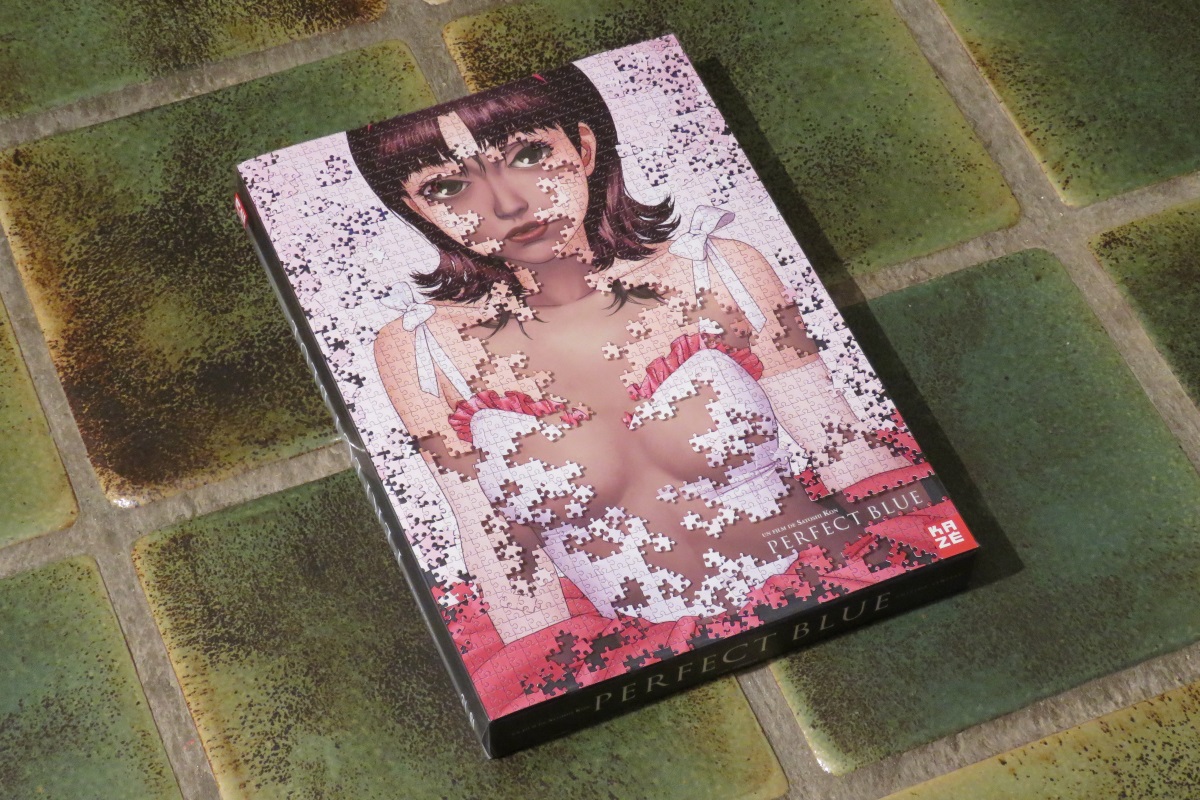 Here it is: a slipcase the size of a coffee table book, featuring the distinct artwork Satoshi Kon created for the 2008 Japanese Blu-ray release, celebrating the film's themes of conflict between multiple identities. 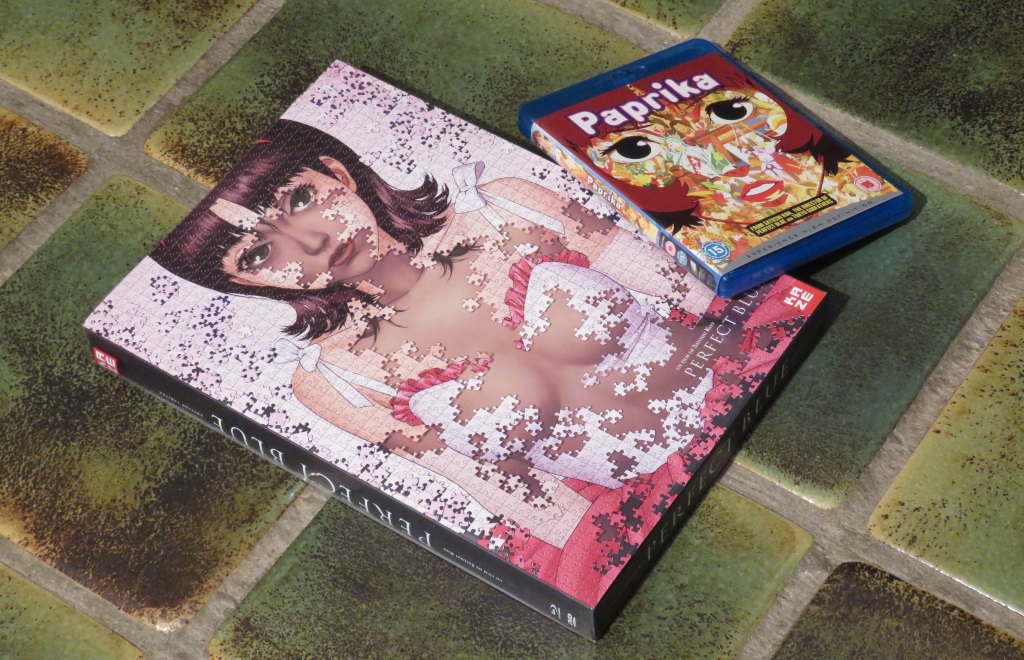 To show what size this slipcase is, here it is next to a regular Blu-ray Amaray. 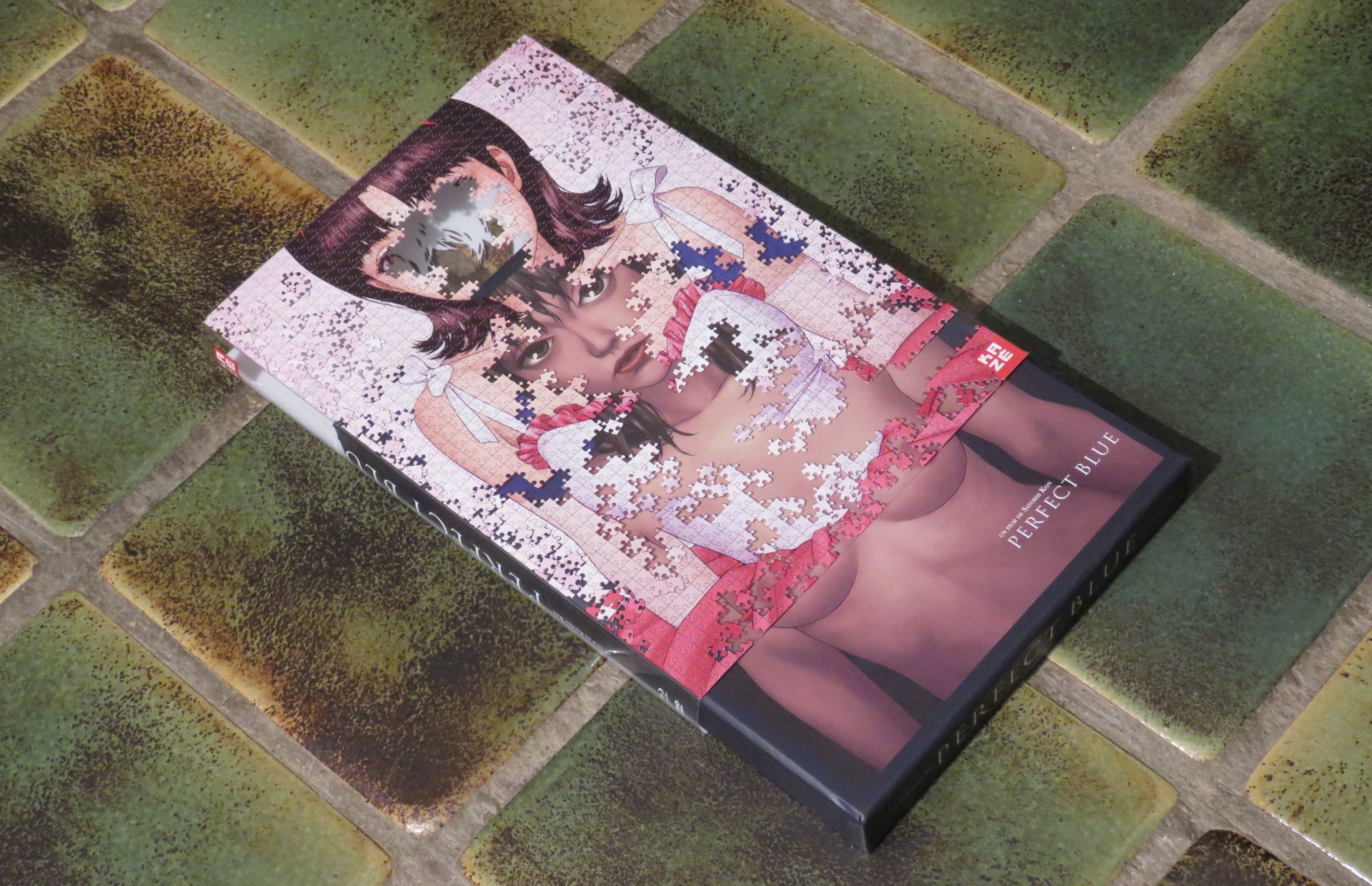 Actually, the slipcase is a double one: a translucent plastic one covers the whole package, and it has to be removed before you can get at the contents. 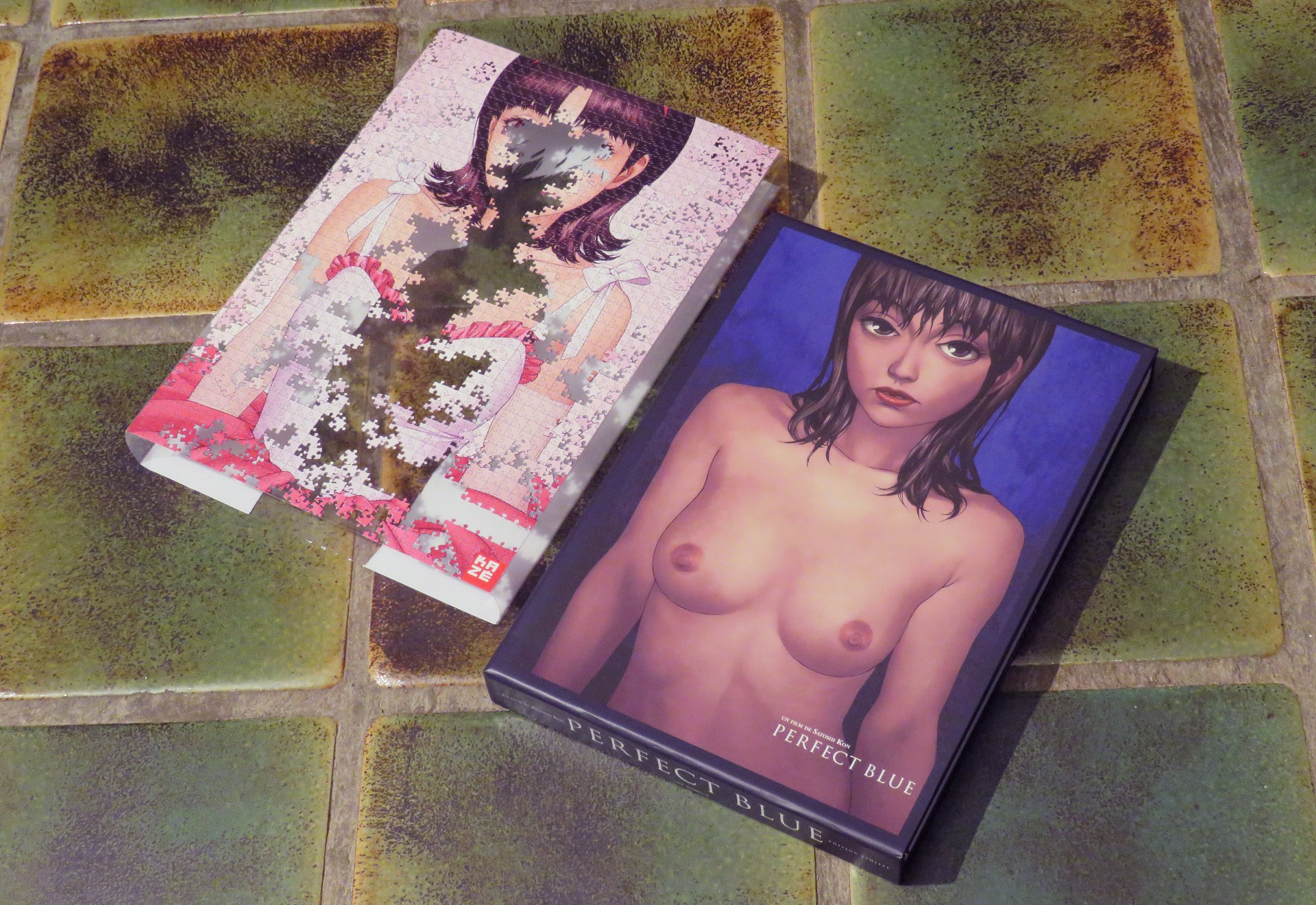 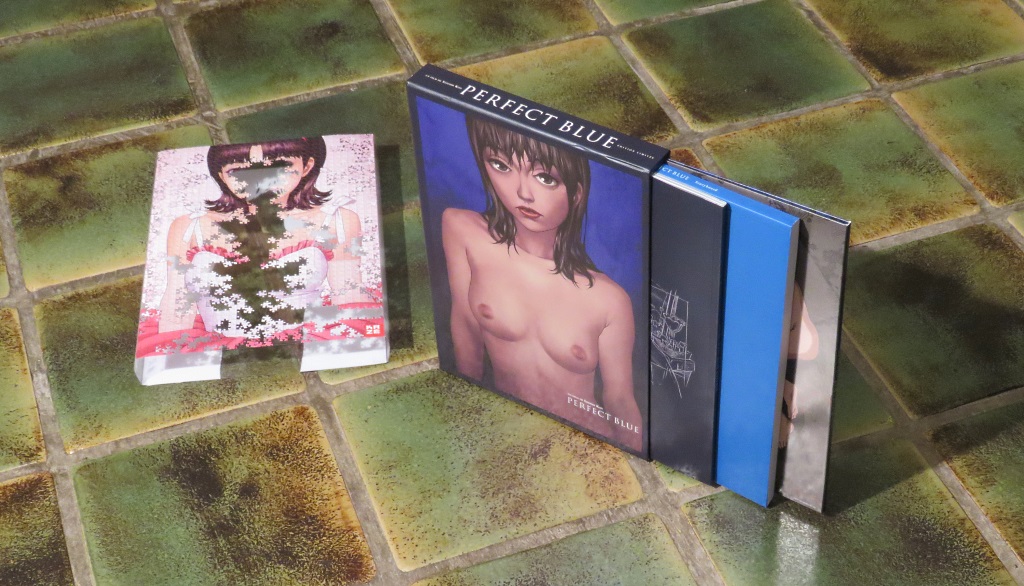 Inside the slipcase is a Digipak containing the film's discs, and two books. 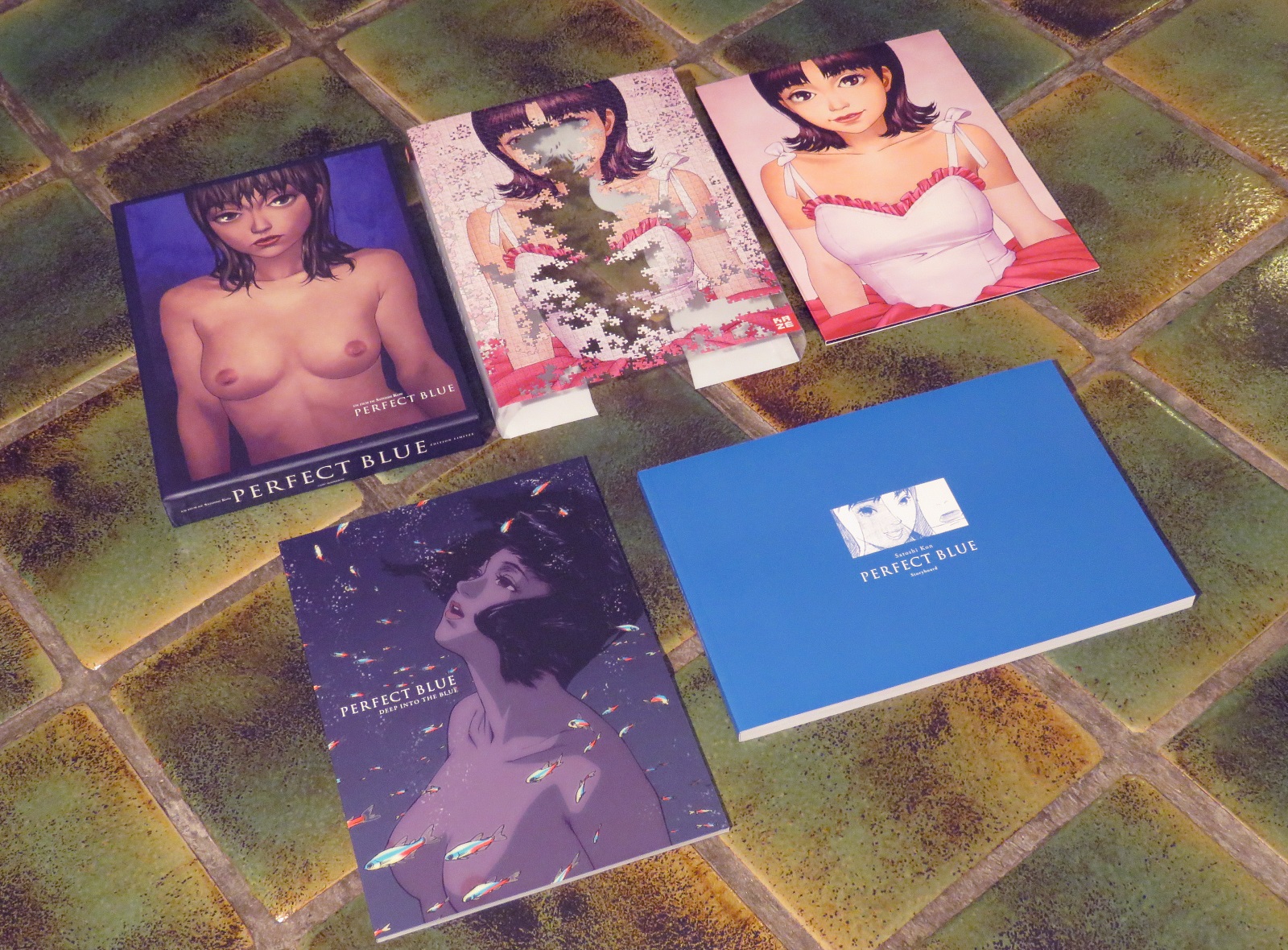 All contents displayed. At 64 and 192 pages of this size, these books are actual books, not booklets. 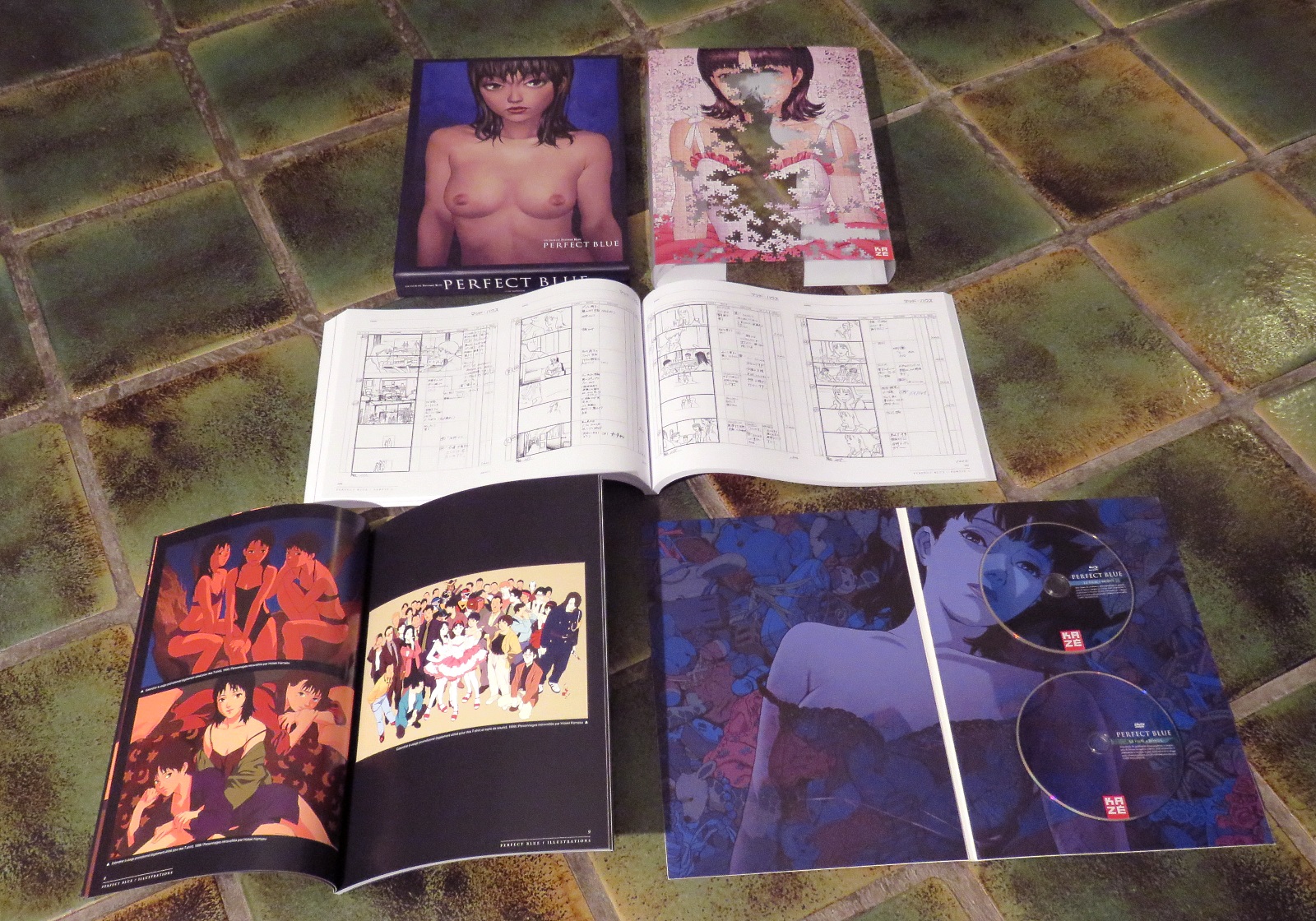 All contents opened. As a fan of Satoshi Kon's artwork, this is awesome. 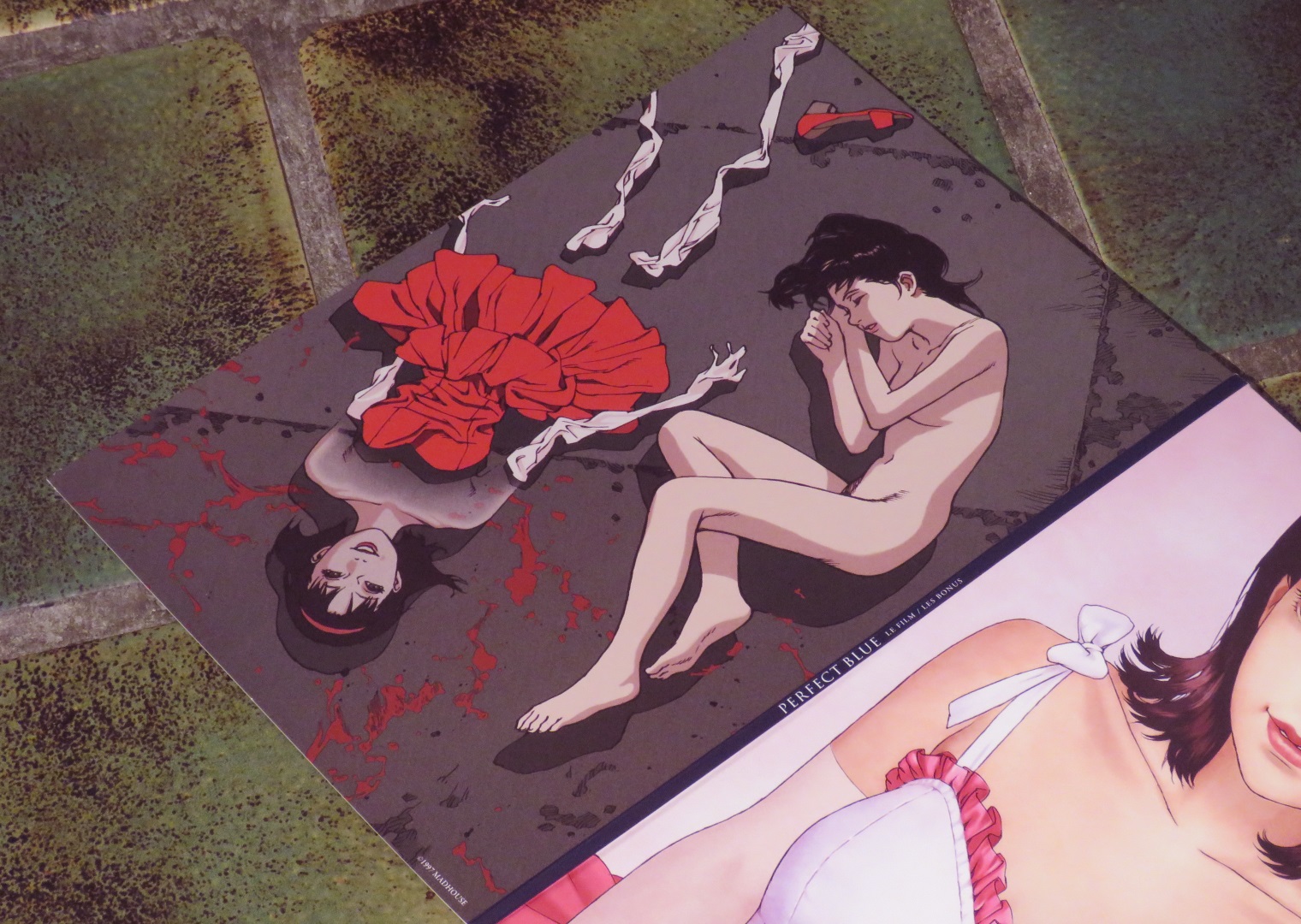 The reverse side of the Digipak. 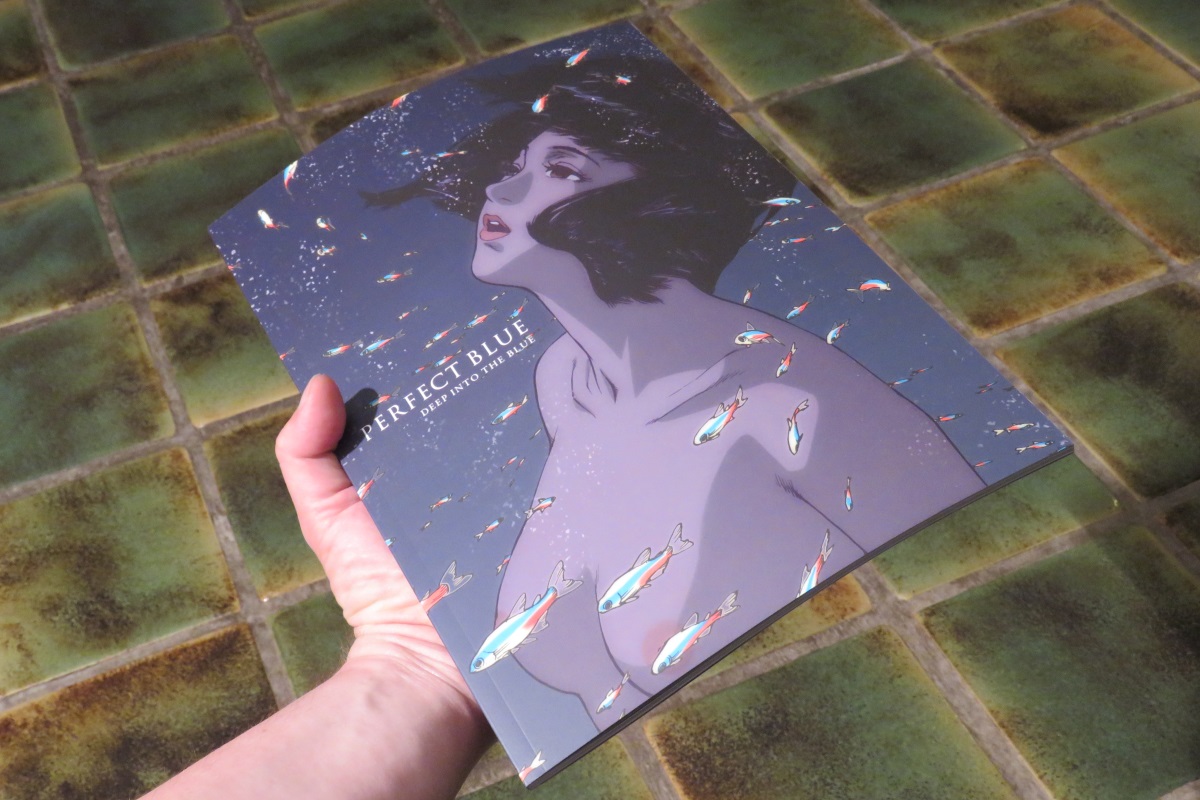 This is the 64-page artwork book. 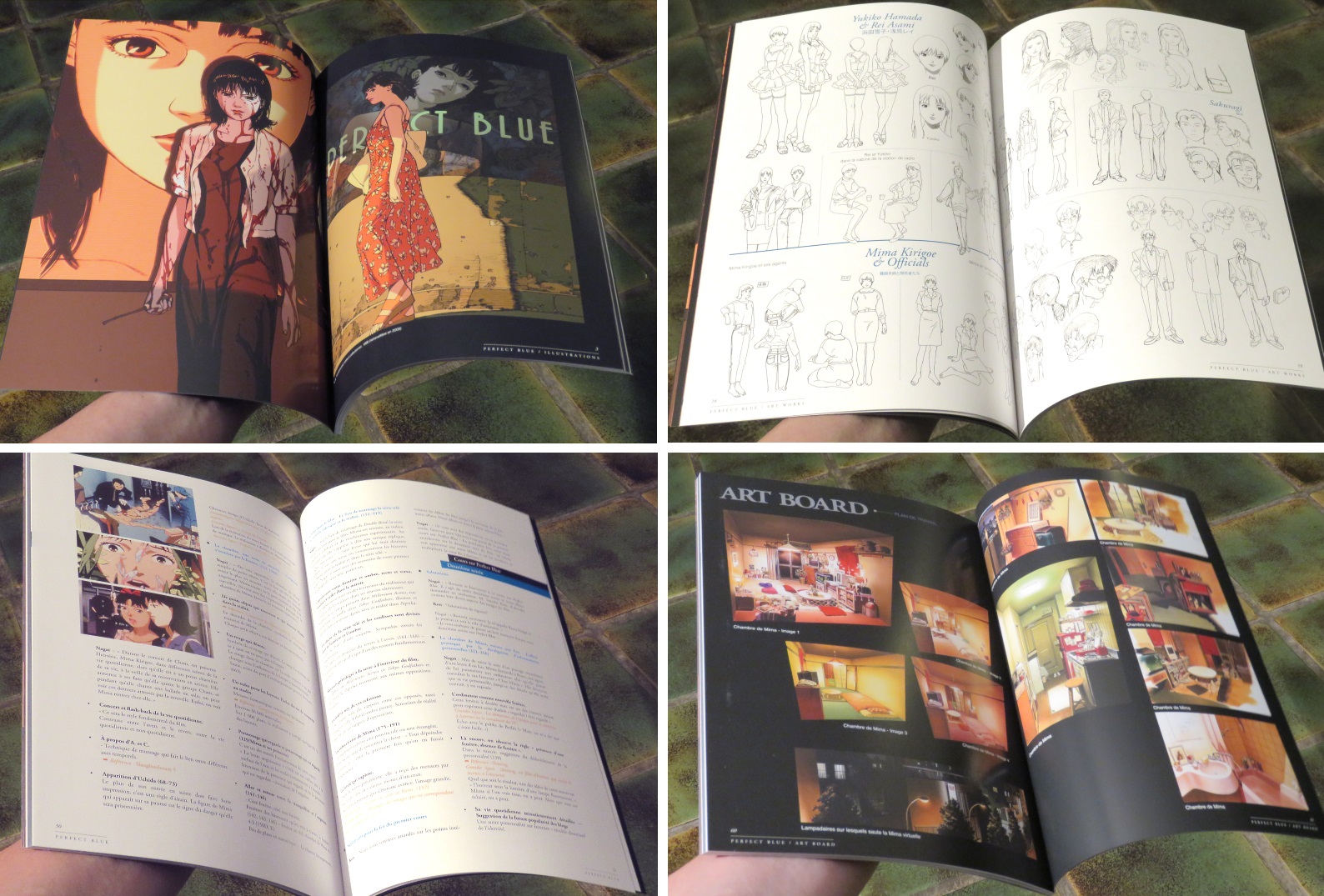 In it, we get posters, promotion artwork, backgrounds, character designs, interviews... it is a veritable treasure trove for fans. 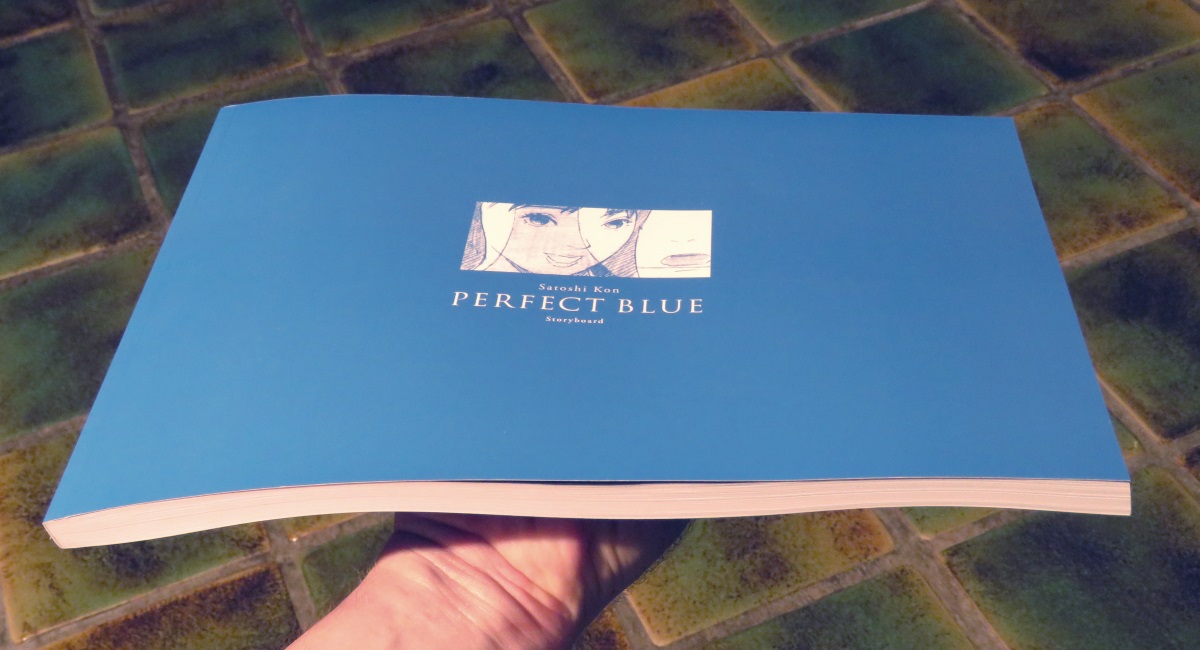 Next we have the 192-page storyboard book. Note that a similar book can be gotten separately from Japan, but its price BY ITSELF exceeds the price of this French package. Unlike the Japanese version which has one storyboard page a page, this one has two storyboard pages a page (which accounts for why it has only 192 pages instead of 400).

The inside of the storyboard page. Note the bathtub-screaming scene on the top right, later re-used shot for shot by Darren Aronofsky in Requiem for a Dream.

To top it off: there's a separate chapter dedicated to the storyboards of deleted scenes. Fantastic stuff! 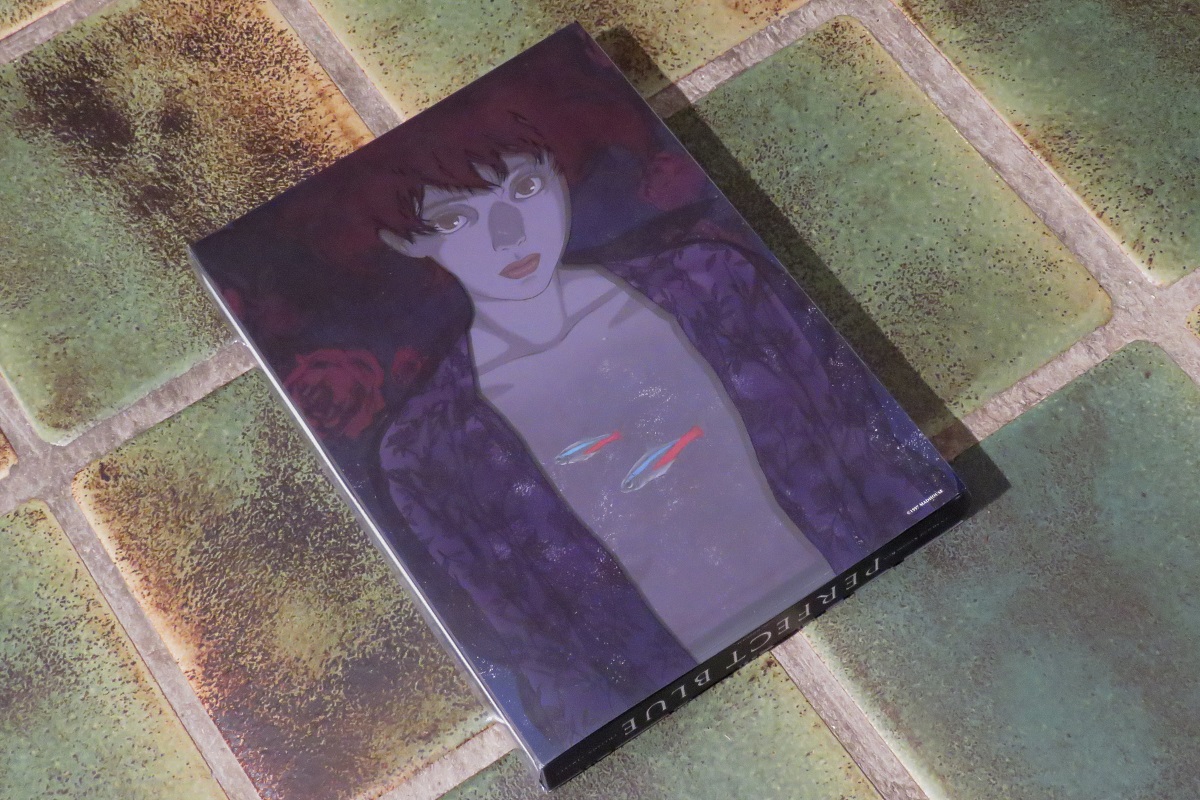 The (back)end of a fantastic... wait. 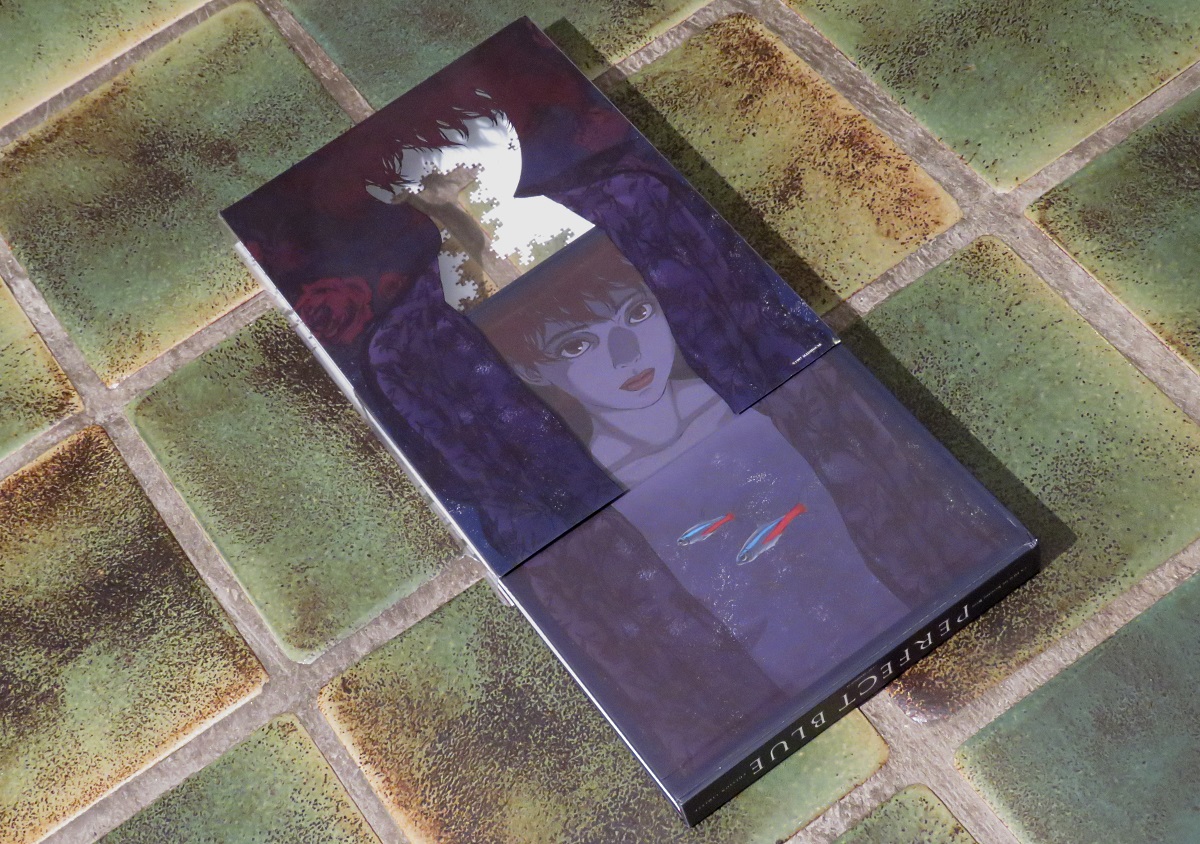 Ah, of course, the back-end also has the double-slipcase effect. 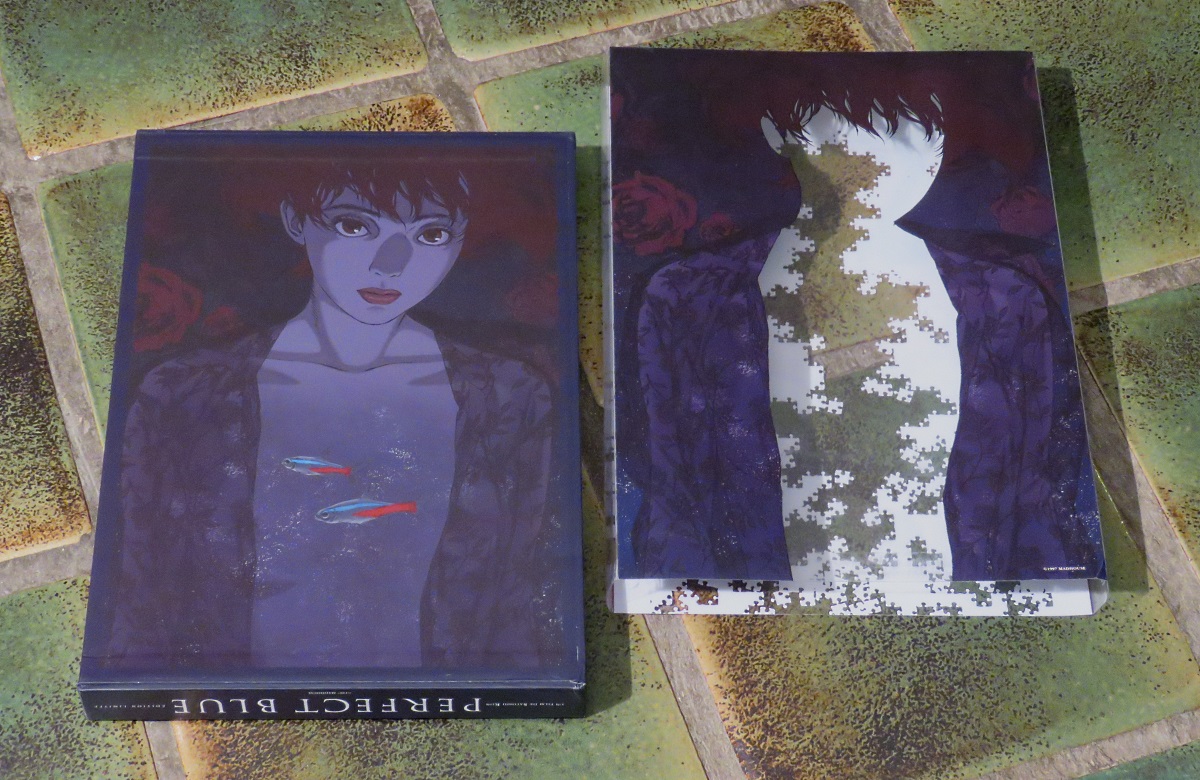