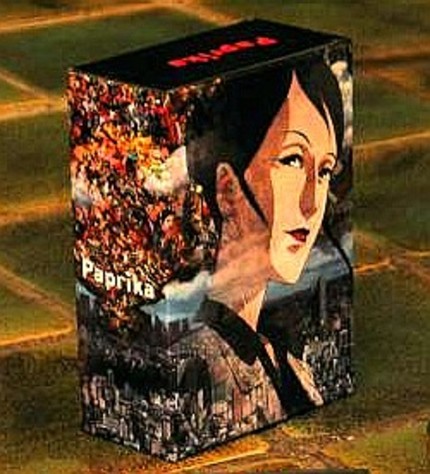 Yes, I know this is the umpteenth time we mention this film. It's not even the first DVD-review of "Paprika" here at ScreenAnarchy! But this specific edition has been a thorn in my side for so long that I need to extract it.
This review is written for closure (or so my wife and shrink call it).

Remember that earlier this year the Sony website was somewhat inconsistent in its mentioning of the upcoming DVD releases of Paprika. We've had fictional releases in March, May and June, with Polish but without Japanese soundtrack, with Italian but without English subs, whatever.
Those folks over at Sony Columbia sure do have a sense of humor!

Then came the news that the French editions would be released at the end of June, with English subtitles, including an edition which would feature the massive 760 page storyboard and making-of book that the Japanese got in their May release! Weeeeeee!!!

Unfortunately, the English subs were un-confirmed, re-confirmed and finally when the French editions launched in June they indeed featured Enlish subs (along with French and Arab ones). But where was the super-duper edition with the big book? Delayed until October, BUT this numbered edition (5000 only!) would include 3 printed sketches, signed by Satoshi Kon himself.

It is October.
It has arrived.
I'm reviewing it.

The short gist of it is this: DVD's are the same as in June, they're English-friendly, packaging is the same as in Japan, but here is what will be the dealbreaker for many:

THE 760 PAGE BOOK IS FULLY IN JAPANESE WITHOUT ANY FORM OF TRANSLATION WHATSOEVER!

Read on for a longer review.

Normally I'd start here with a short history, review of the movie etcetera, but this has already been covered extensively on this site, even by me.

Peter van der Lugt from Ghibliworld was kind enough to review the Japanese Limited Edition back in May, and for an item-by-item review I'll refer you on to him also since it's exactly the same edition, only now we get subtitles.

So here are my additions to Peter's review:

Disc 1:
-English, French and Arab subs on the main movie.
-Only French subs for the commentary track.
-The DTS is fucking amazing, demo quality.
-The menu's are in English, not French. (?)

Disc 2:
-All documentaries subbed in a slew of languages including English, German and even Dutch.
-The menu's are again in English, not French.

The 760 page book:
-Gorgeous black & White tome with storyboards and background information, but totally in Japanese without any translation in either French or English.

What??
Four months of delay and they don’t even translate the book? I can imagine not translating the storyboard pages (which forms the vaaaast majority of the book) but the little inserts about the “making-off” ? That’s just daft!
This is a fact which I wasn't aware of, in fact this edition has been a bit hush-hush since it's original announcement when it was slated for June. "Amazon France" has removed all details of it from their website, and just kept the old, wrong image up. I can imagine lots of people to be very pissed off when they open the package and find out the book is not in French.

Wrong image, I hear you think?
Well, that's actually very good news. Satoshi Kon designed the Japanese Limited Edition and created a beautiful new painting for it, showing hundreds of characters from the movie. The original French Limited Edition had plastered the title in huge letters over this artwork, but the actual edition that was released shows a small, translucent font which keeps the painting mostly intact. Good! This decision definitely has my approval.

Speaking of Satoshi Kon, also included is an envelope with three sketches, signed by him. Only it’s all printed, even the signature.

Now don't get me wrong. I'd rather see Satoshi Kon working on something useful and creative instead of signing 15.000 cards (three for each set), but announcing "signed cards" and getting these it does seem like someone has been fibbing a bit. And again this doesn't explain the delay.

Now do I feel cheated? Yes and No.

No, because the video and especially the audio -important with this movie- exceeds my expectations (then again, all of that was available back in June).
No, because it is way cheaper than the Japanese Limited edition was. The french LE can easily be found for less than 50 Euro while it has the same scrumptuous packaging and the same book that I was willing to shell out for back in May, if only that version had had subtitles.

Conclusion:
Once you KNOW that the book isn't translated, this set is actually quite recommended! For only a few (cough!) bucks more than the regular edition you get as much as the Japanese got in May.
But I had rather paid even a bit more and gotten a readable book, as happened with those brilliant Patlabor Limited Editions...

Peter van der Lugt's DVD review of the Japanese LE!
Peter's excellent site Ghibliworld.
My review of the movie itself.
Don't just take my word for it, here's Todd's review.
See pictures of this set in our forum!
And, finally, you can buy it here.