Blu-ray Review: BUCK AND THE PREACHER Blasts Away Western Cobwebs

Sidney Poitier and Harry Belafonte star in Poitier's directorial debut, a rambunctious Western that aims to correct the U.S. historical record. From The Criterion Collection. 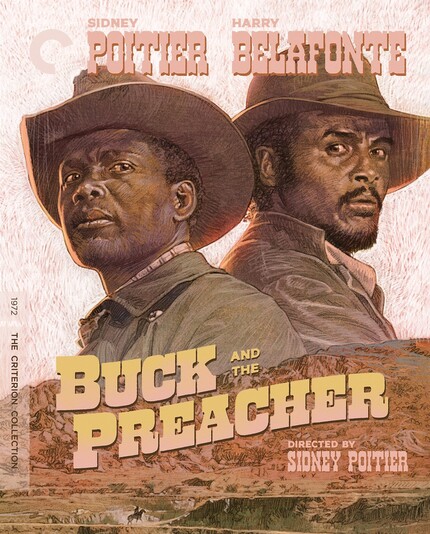 Buck and the Preacher
The film is newly available on Blu-ray from the Criterion Collection.

Sidney Poitier's directorial debut, sporting a new 4K digital restoration on Blu-ray from The Criterion Collection, reasserts its place as a foundational work in American cinema of the 1970s.

Just a couple years before, distinguished photo-journalist Gordon Parks began his screen career by adapting his own novel, The Learning Tree (1969), into an acclaimed directorial debut, becoming the first Black filmmaker to write, produce, and direct for a major Hollywood studio. Parks' sophomore effort, Shaft (1971), became a smash hit at the box office, helping to define popular culture during that era and far beyond.

Into that environment, Harry Belafonte was approached by fledgling screenwriter Drake Walker, who had written a script inspired by real-life events in the Old (U.S.) West. Belafonte was excited about the story and approached Sidney Poitier, with whom he'd had a falling out a couple years before. Poitier quickly warmed to the subject as well. They put aside their differences and teamed up to make the film through their production companies; Poitier had a four-picture deal with Columbia Pictures at the time, and Columbia agreed to finance to the tune of two million dollars.

The above information is courtesy of two great and informative new extras on Criterion's package. First, "Expanding the Western" showcases author Mia Mask talking about the movie for 25 minutes, providing helpful background on both actors and their careers up to that point, placing the film into historical and cinematic context as well. She explains how Poitier became the director after things did not work out with the studio-approved pick, TV veteran Joseph Sargent. (Sargent went on to direct The Taking of Pelham One Two Three).

Then, a 14-minute interview with Gina Belafonte, who talks about how her father got his start in the entertainment business, became involved to a major extent with the civil rights movement in the 1960s, and how the relationship between her father and Poitier developed over the years. She also bears personal witness to the shooting of the film on location in Durango, Mexico.

Those new extras are buttressed with three archival television appearances by Poitier and Belafonte, in which they talk at length about their reasons for making the movie. The first (13 minutes) was shot on location in Durango, the second is a 28-minute segment of Soul!, shot in front of a live studio audience, and the third is an episode of The Dick Cavett Show (64 minutes). All are good reminders that talk shows and the like were much more in-depth than the sound bites that pass for most interviews today.

A wonderful printed essay by critic Aisha Harris is included with the Blu-ray. She writes at length about the film and how it fits into film history and the careers of both its lead actors.

Criterion has put together a great package for a film that didn't do that well at the box office, and not too well with mainstream critics, either. Watching it for the first time recently, I quickly got caught up in the more entertaining aspects of the film. I'm sure it helps that I love Westerns and I also have a soft-spot for 70s movies.

Buck and the Preacher is more than a "Black power Western" in that it's impossible to separate the message from the movie, yet the message is so much fun to watch and the performances are so enjoyable that it's easy to become absorbed in watching it. Poitier and Belafonte's combustible chemistry is palpable, and when Ruby Dee returns from the edges of the story to stand dramatically alongside them -- she plays the wife of Poitier's character -- the film elevates to a higher level.

As a bonus for fans of Cameron Mitchell, he's here as a particularly loathsome villain. James McEachin (before his starring role in the great TV series Tenafly) gives a noteworthy performance as the spirited leader of a caravan of freed slaves heading to freedom Out West. Veteran scribe Ernest Kinoy wrote the screenplay; the great Benny Carter composed the original musical score, one of the few he wrote for the screen.

All this to say: I loved the film much more than I thought I would. Check it out.

Buck and the Preacher