John, Paul, George and Ringo star in a fictional documentary, directed by Richard Lester, that became a classic. Now available on 4K Blu-ray from The Criterion Collection. 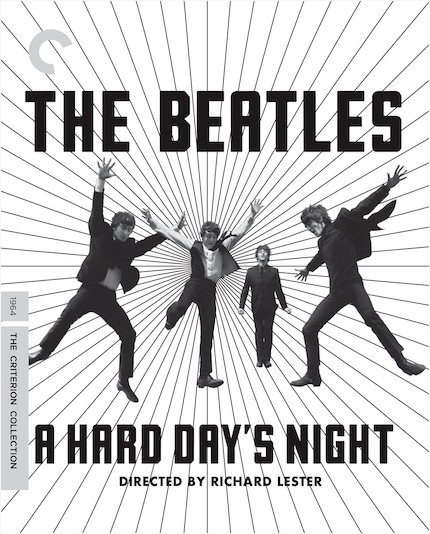 A Hard Day's Night
Now available from The Criterion Collection.

We have been invaded by Beatles lately.

In November, Peter Jackson's epic documentary Get Back debuted on the Disney Plus streaming service, as I detailed here, covering the end of The Beatles as a musical group. Rewinding to 1964, A Hard Day's Night captures their earlier days as a British pop phenomenon that took the world by storm.

It's also a bloody good film, shaped by the distinctive visual sensibilities of director Richard Lester, who was given complete creative freedom and a tiny budget to pump out a quick moneymaker before the band's popularity waned. One month after the band's televised appearance on The Ed Sullivan Show, shooting began on location in March 1964.

The Beatles were mobbed anywhere they traveled in those days, and the frenzied excitement of young people, as well as the stoic bewilderment of any adults in the vicinity, came to picture a large slice of popular culture in the 1960s. For film fans, though, A Hard Day's Night is a masterpiece, and the Criterion Collection has produced yet another release that deserves a place in any discerning home-video collector's library.

If you know and appreciate what all that verbiage means, good for you! I am, quite honestly, completely at sea here; I freely admit that I am not a 4K person (yet) and do not own a 4K Blu-ray player (yet) nor a 4K television (yet).

Even so, I can testify that this is an extraordinary set of special features, and I have watched and enjoyed all of them, some of which are only available on the less expensive, three-disc Blu-ray/DVD combo edition or the two-disc 4K UHD + Blu-ray combo edition, which I have noted below with an asterisk.

-- Audio commentary - a very lively discussion, featuring eight cast and crew members, recorded in 2002 (*)
-- In Their Own Words (18 min.) - Audio-only, set against a montage of images, mixed together from 2014, The Beatles talk about the film
-- Anatomy of a Style (17 min.) -- Excellent, insightful feature, as two editors break down Richard Lester's method - recorded in 2014 (*)
-- You Can't Do That (62 min.) -- Phil Collins, who as a lad attended the concert that is included in the film, narrates an extended 'making of' doc - from 1994
-- Things They Said Today (36 min.) - Another 'making of' doc, distinguished by the participation of director Lester, writer Alun Owen and cinematographer Gilbert Taylor - recorded in 2002 (*)
-- The Running Jumping and Standing Still Film (11 min.) - Nominated for an Academy Award, the short was shot cheap by director Lester and producer Peter Sellers, and is rather brilliant (*)
-- Picturewise (27 min.) - Narrated by Rita Tushingham and includes an interview with the director, the feature covers his early work - from 2014 (*)
-- The Beatles: The Road to A Hard Day's Night (28 min.) - In an excellent discussion, Beatles biographer Mark Lewison talks about the history of the group, from 1957 to 1964 - recorded in 2014 (*)
-- Trailers - 2000, 2014
-- Printed booklet, including a wonderful lengthy essay by Howard Hampton and extended excerpts from an interview with Richard Lester

Criterion also offers an even less expensive DVD, so check your budget and order accordingly.

As our own Jim Tudor noted in his review of Robert Zemeckis' I Wanna Hold Your Hand, which is set in the days leading up to their appearance on The Ed Sullivan Show: "The Beatles have been such beloved entrenched cultural giants for so long that many a music fan takes them for granted." I'll add that, as a film fan, I have often taken any film in which they appear for granted, but no more.

Neither do I want to take the multi-varied accomplishments of director Richard Lester for granted. Watching A Hard Day's Night again -- I first saw it on the big screen in 1982, when Universal Pictures reissued it in theaters -- has inspired me to begin rewatching all his work that I can get my eyes on.