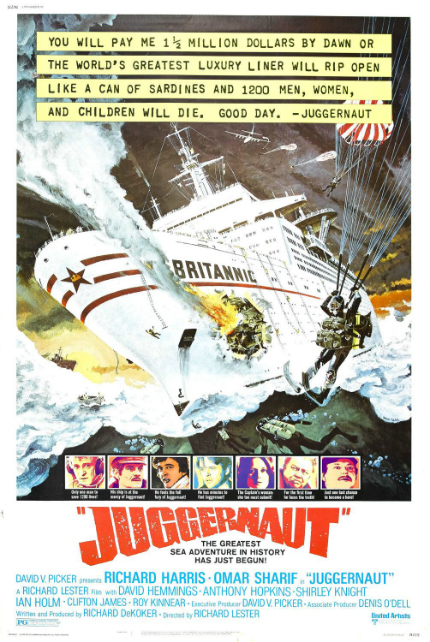 An old-fashioned, ticking time-bomb suspense thriller, Richard Lester's Juggernaut (aka Terror on the Britannic) (1974) satisfies on the most elemental level: it made me increasingly tense and nervous as I watched.

Lester made his directorial debut with the very charming The Mouse on the Moon (1963), then set a new high standard for music-themed films with the still fresh and remarkable A Hard Day's Night and Help!. As I admitted last year, however, "it's been perhaps 20 or 25 years since I tried his [other] 60s films, which didn't appeal to me at the time."

I still haven't revised those films, but after enjoying Royal Flash (1975) last year, I couldn't resist stepping back a year or so to Juggernaut. (In this same time period, Lester also helmed the thoroughly enjoyable The Three Musketeers and The Four Musketeers, which hold up quite nicely.) Even though I didn't see Juggernaut when it was theatrically released in the U.S. on September 25, 1974, it wasn't for lack of interest -- and that's primarily because of the poster!

Did I ever even bother to look up the definition of that title at the time? Per Merriam-Webster, it's "something (such as a force, campaign, or movement) that is extremely large and powerful and cannot be stopped." For some reason, I always assumed it was the name of the ship, but the transatlantic liner where much of the action takes place is actually named Britannic.

The Britannic leaves port in England, where we see Anthony Hopkins wave goodbye to his wife Susan (Caroline Mortimer) and two young children (real-life siblings Adam Bridge and Rebecca Bridge) on the ship before he gets into a police car. Also on board the ship, bound for America, are the expected white people, including a blunt-spoken, always suspicious American passenger named Corrigan (Clifton James, in subdued mode), and various crew members, most notably stern First Officer Hollingworth (Mark Burns), cheery Social Director Curtain (Roy Kinnear) and friendly steward Azad (Roshan Seth), who brings a rare touch of color to the cast.

The imperious Captain Alex Brunel (Omar Sharif) eventually makes an appearance, in the company of a mysterious stranger, Barbara Bannister (Shirley Knight), which causes some tongue-wagging on the part of the crew. The ship soon hits rough seas, which leaves the passengers sick and the hapless crew members struggling to keep smiles plastered on their faces. 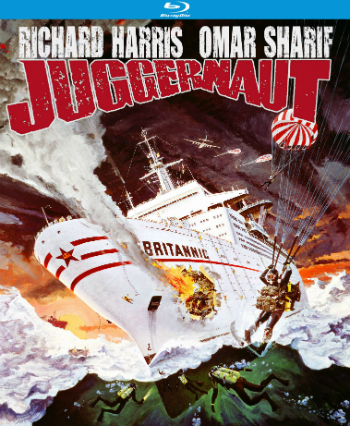 But we didn't buy our ticket (back in the day) or bare-bones, yet nicely-transferred Blu-ray (now available from Kino Lorber), to watch a passenger ship sail rough across the Atlantic Ocean.

The morning after the ship has sailed, while it is still many hours away from land, Nicholas Porter (Ian Holm), the managing director of the ship line, receives a phone call from a man who identifies himself as Juggernaut. (A-ha!) The mysterious man informs Porter that he has planted seven bombs on board the ship and demands 500,000 pounds (now equivalent to about $6.8 million) in ransom or else he will blow up the bombs by remote control in 24 hours' time. To demonstrate that his threat is real, he explodes one of his bombs.

With the time element and the threat both established, then film then introduces the key players back in Britain: Porter, who (refreshingly) fears for the fate of the passengers and crew over any financial costs for his ship line; John McLeod (Anthony Hopkins), who leads the ground investigation for Scotland Yard and quietly fears for his own family on board the ship; a pushy armed forces representative; and a government official, who is supercilious to the infuriating extreme.

Oh, yes, we are also introduced to Commander Anthony Fallon (Richard Harris) and Charlie Braddock (David Hemmings), veteran bomb-squad members who maintain their gallows humor in the face of imminent death. They lead a small crew who are flown over the ship, where they parachute into the ocean (!) and hope they can make it on board, defuse the bombs, save hundreds of lives, and get home to have a drink.

Inspired by a real-life bomb scare aboard the Queen Elizabeth 2 in May 1972, the film leans toward the terse and straightforward in its storytelling, infusing it with a proper amount of gravity. As in real life, the film's fictional government official pushes the ship line manager into accepting the idea of not paying the ransom, which makes the time element weigh more heavily upon the bomb squad.

Also, the 1,200 passengers on board the ship cannot be evacuated on lifeboats because of the stormy seas. That's leaves a few stories to be told, illustrated nicely by the contrast between the vast number of anxious adults and McLeod's two children. Whether they've become quite inured to the danger because their daddy is a cop or because they don't know any better, they offer a refreshing reminder of real life. (The situation also reminded me of John Boorman's later film Hope and Glory, with young people carrying on their childish activities as the bombs go off.)

Producer Richard Alan Simmons wrote the script and the film was all prepped to go under the direction of Bryan Forbes, but then Forbes left the project and executive producer David V. Picker asked Richard Lester to take over on short notice. Lester agreed, but then reportedly rewrote the script with Alan Plater, to the point that Simmons insisted upon a pseudonym (Richard DeKoker) for his work as writer and producer.

I've often seen Juggernaut lumped in with 1970s disaster films, a trend that Airport inadvertently kicked off in 1970, followed by the big success of The Poseidon Adventure in 1972. Although my juvenile mind loves the idea of disaster movies in general, the designation doesn't hold true here.

First, as already noted, the film was inspired by a true-life incident at sea, not a natural disaster. Second, Juggernaut opened in U.S. theaters on September 25, 1974, which means it opened before the very popular disaster-film trio of Airport 1975 (October 18), Earthquake (November 15) -- which I love -- and The Towering Inferno (December 14). So it was no imitator.

As a straightforward, stiff-upper-lip British thriller, Juggernaut succeeds splendidly and is recommended for all fans of 70s cinema -- especially if, like I do, you have a big soft spot in your heart for Richard Harris.

70s Rewind 70s is a column in which the writer explores and defends his favorite film decade.

Do you feel this content is inappropriate or infringes upon your rights? Click here to report it, or see our DMCA policy.
Anthony HopkinsDavid HemmingsIan HolmOmar SharifRichard HarrisRichard LesterShirley Knight