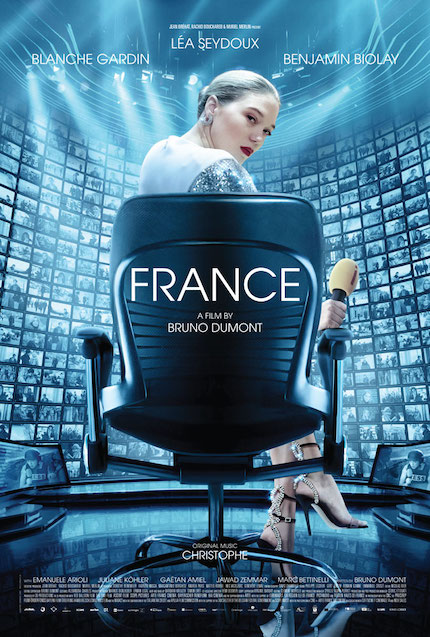 Bruno Dumont has tried everything, from a sobering police procedural (Humanité) to a symbolic take down of the US hegemony and violence (Twentynine Palms) to an unflinching biography (Camille Claudel 1917) to a slapstick comedy TV series (P'tit Quin-Quin) to heavy-metal period musical(s) (Joan of Arc Series), all the while working with non-actors and big time movie stars alike. His diverse filmography has drawn comparisons to works of such auteurs as Bresson and Dreyer, both in method, form and spirituality.

With French superstar Léa Seydoux in a title role in France, he surprises us once again, with an astute take on the role of the media in our complicated world where trust and belief are hard to come by.

Seydoux fits right in as glamorous France de Meurs (rather unsubtle wordplay and metaphor), a big haired, famed TV personality in designer clothes and posh apartment. She practices combat journalism where she throws herself into the world's hotspots and edits news segments in such a way to be seen as a brave, noble and caring journalist.

Her tit-a-tat with politicians -- including cleverly edited actual TV conference footage of French President Emmanuel Macron, and a Crossfire-style news segment she hosts with political pundits -- bring her fame and fortune. She indeed is the defacto face of French TV infotainment.

But a fender-bender with a delivery man on a bike puts France into a mid-life crisis where she questions every choice she has made in her career, including her loveless marriage to a semi-famed writer Fred (Benjamin Biolay), and parenthood. Meeting with the man's parents, who are disabled and unemployed, takes her out of the affluence bubble a bit as well.

Is she playing the part of a saint on camera or is she trying to get some instant points on her karma? Dumont, with many of the film's slow zooms into the close-up of Seydoux's alabaster face and painted lips, in which she looks straight at the camera, never makes it clear.

One thing for sure is that she is unhappy. France declares her retirement from her TV career in her show while tears stream down her face.

To avoid public scrutiny, and trying to figure out her next step, France flees to the German Alps, into a very exclusive mountain retreat health clinic where the rich and famous go to rest and rejuvenate. She meets a charming and unassuming young man, Charles (Emanuele Arioli), there and they have an affair, only to find out he is a journalist implanted to write about France in a magazine.

TV and being famous are the only things she knows how to do, so she gets back to the TV world, only to stumble when her carefully organized boat ride with immigrants fleeing their 'oppressive regime' segment goes on live with an off-screen conversation between her and her wisecracking producer Lou (Blanche Gardin), in which they disparage immigrants, without knowing their mics were still on.

France is not quite a media culture, first-world liberal satire. Sure, there are few laughs here and there, including a slo-mo car crash that are too stupendous to be taken literally, but that’s not where Dumont’s interests lie. And the film's second half veers more into a melodrama of the classic Holywood style 'women's movie' territory where a female protagonist have to choose between her career and love, calling to mind Broadcast News.

Based on his track record, Dumont is always searching for a spiritual side of things in unlikely places, across time and the class divide. In France he seems to be likening the news celeb culture to a new religion, with France's garishly decorated apartment, including stained glass wall featuring some mundane pop art pastoral, as our new altar.

France herself -- a blonde, blue-eyed white beauty in designer clothes -- is perfect for being our flawed, needy god, in our wired, neo-liberal capitalist society. Her simultaneously fake and sincere demeanor both in public and private, her desire to love and be loved, her ability to cry on cue are all the attributes the new news anchorwoman needs: France is 'fair and balanced,' 'the most trusted name in the news,' and so forth.

Underneath all the glitzy and bougie shenanigans of a celeb news personality, Dumont finds the post-irony era belief system we deserve in France de Muers, the flawed infotainment queen, as our new god. And a nation, still holding on to the colonial mindset of military presence in the world’s hotspots, embodied by a pretty woman in nice clothes, in whom the French public still put their trust, whether the motto of the revolution -- liberty, equality and fraternity -- still rings true in an ever changing world we live in or not.

France opens in theaters in New York on Friday, December 10, followed by a national roll out. 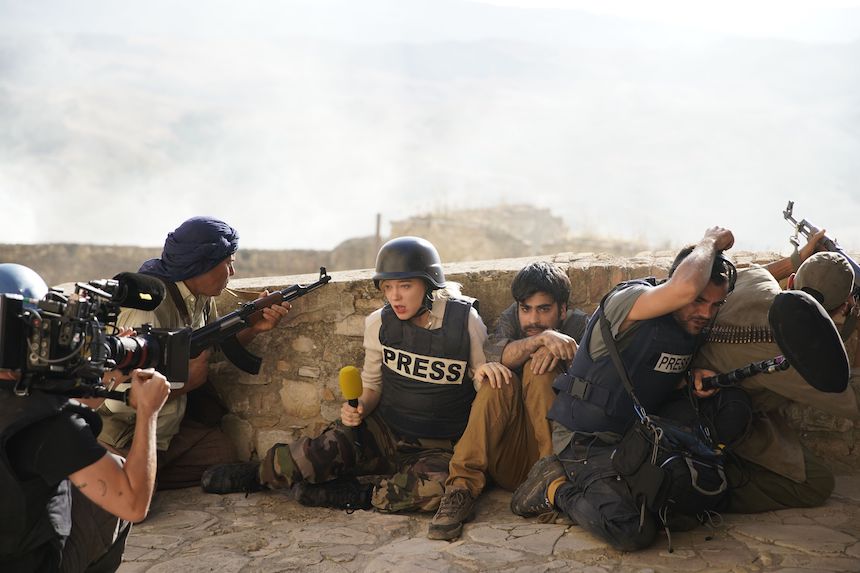 Do you feel this content is inappropriate or infringes upon your rights? Click here to report it, or see our DMCA policy.
BelgiumBruno DumontFranceGermanyItalyKino LorberLea Seydoux