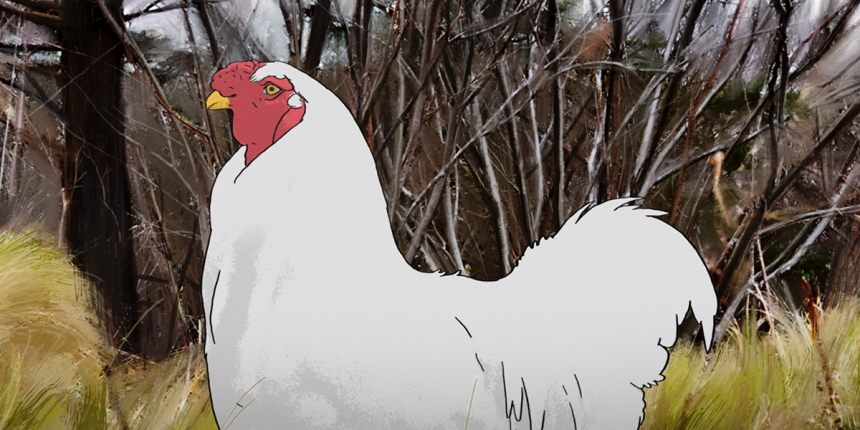 I am cognizant of the fact that it might take you longer to read this review than to watch the one hundred and twenty seconds of this animated short involving chickens searching for scratch, and philosophizing on the circle of life.

Taking place in an overgrown cemetery, and featuring Smith's mystical-sonic score, combined with fowl subtitles, and clucks, on the purpose of existence, particularly at life's end, the film is not so much morbid, as it is charming. It flirts with celebratory. That the rooster, Lennart, who served as a model for the animation, has since passed, it begs the question: Who ate him?

Atlantic Canada's Seth A. Smith has made three icky, sticky, but thoughtful, art-horror features (Lowlife, The Crescent, Tin Can) that centre around death & rebirth. Dust Bath, this animated, 2 minute short film, follows in the same vein. Given the low-key humour of the scenario - a rooster that fantasizes about being devoured by his enemies - how Smith resisted titling it "Hendigo" is a remarkable act of artistic restraint. Restraint, which I do not obviously, practice. My apologies.

However, I would be remiss if I did not also note that Dust Bath makes a fine double-bill with another existential Rooster short film, Tungrus.

Do you feel this content is inappropriate or infringes upon your rights? Click here to report it, or see our DMCA policy.
AnimationCanadaCircle of LifeDust BathExistenceRoosterSeth A SmithShort FilmTIFF