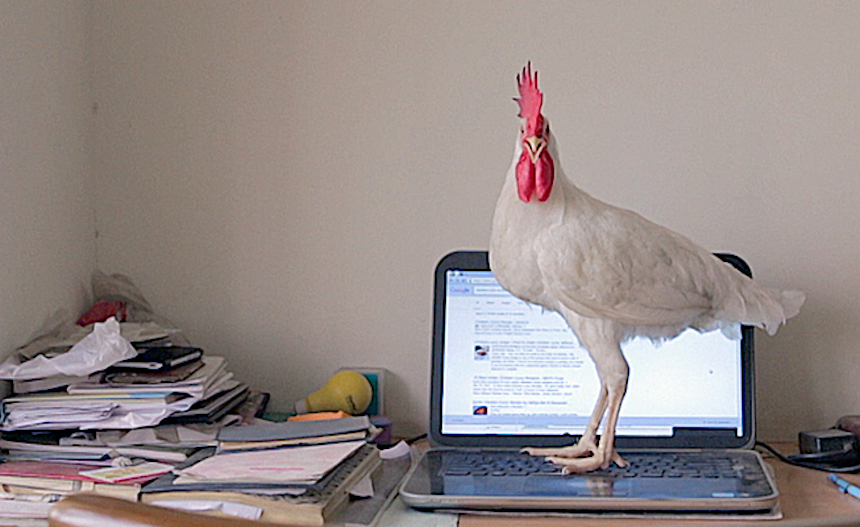 "If anybody wants to adopt a rooster, do your research, and as with all pets, be prepared for life to become hell."

Tungrus examines the perils of pet ownership in a middle-class Mumbai flat, when a family adopts a 2 day old chick as a pet. The father thinks it would be a fun playmate (or plaything) for his cats, Ginger and Garlic, but this tiny chick grows up into an adult cock that also happens to be quite a dick. (Sorry for that!)

Rishi Chandna's short documentary has the dryly hilarious tone of a Chirstopher Guest movie, and the film-language instilled wit of an Edgar Wright picture.  It funnels both of the sensibilities into a deeply funny 15 minute study in domestic hierarchy. There is a wonderfully precise comic timing in the editing that accompanies Deepak Nambiar's impeccable (sorry!) interior compositions of a family terrorized by the tyranny of a emboldened chicken, and their crestfallen (sorry, again!) confessionals to the camera.

The father's two sons both have different forms of exasperation and embarrassment with their dad's irresponsible choice of 'pet.' The mom appreciates the comedy of the situation best, perhaps because the rooster doesn't pester her so much as make her husband resemble a movie character she is fond of (Tungrus, played by Naseeruddin Shah in the 1983 real estate farce, Mandi, a simple but kind helper in an awkward neighborhood situation).

And then the notion of what to do with the fully grown rooster in such a compact living space? Differing opinions on whether the family should eat the bird, while the camera rack focuses from the oblivious rooster to the 'chicken shop' abattoir at the base of the building. That's a hell of a demotion, from loved pet to Sunday meal. In the meantime, constant crowing, not at the crack of dawn, but whenever the bird darn well feels, does not endear the family to the neighbors. The film also gives a sense of just how many times a day a rooster defecates, and what it entails to constantly clean it up. (And begs the question on whether the maid, also featured in the film, will join the family for Sunday dinner?)

The jump in just a few generations from rural life to suburban middle class existence, along with a ban on beef (Hindu politics in Mumbai), simmer in the background of the film while we get to watch an entitled rooster be an asshole to his loving family that may or may not eat him. Absurdist Tragi-Comedy does not get any better than this, and how perfect are the names of those cats who may or may not get the last laugh.