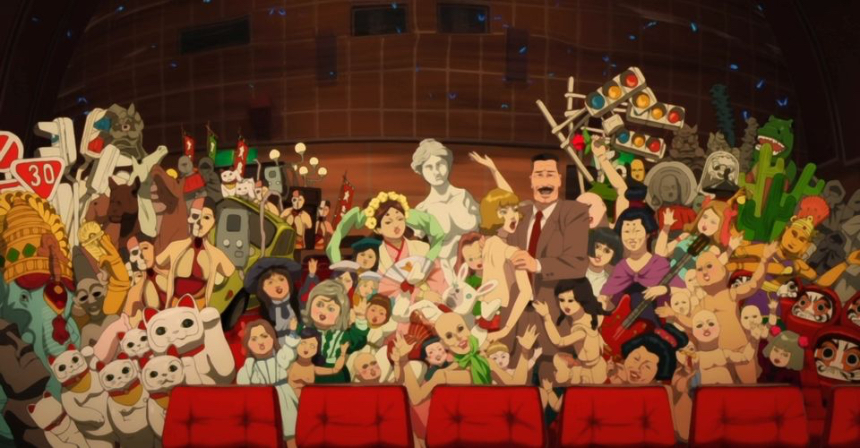 Watching Pascal-Alex Vincent's summation of Kon Satoshi's work and life and untimely death made me more than a little bit sad. Not because the film is a poor tribute or account of one of the leading lights of Japanese filmmaking, it certainly is not.  Rather, it has now been over a decade since the auteur-animator-director and simply, artist, died of Cancer.  Kon left behind an unfinished feature, The Dreaming Machine, as well as a near perfect legacy of daring, complex and varied films, a TV series, a short film, and several Manga. He also left a vacuum in the an industry that has not only been (blessedy) occupied by new voices. Also, like any master of the medium, his influence has been imported overseas. Kon Satoshi did all this before his 47th year.

Satoshi Kon, The Illusionist, plays with the duality of its protagonist in a light hommage to Kon's favorite theme, the outer self and the inner self. It sets out to explore the themes and legacy of the artists work, as well as the man himself.

The documentary excels at the former, using a variety of Japanese and international talking heads: animators, producers, directors, critics to elaborate on Kon's body of work with insight and care. Anyone who is a deep lover of Kon's work will find new insights here. Casual fans of his work, are offered a detailed and convincing through-line of why Kon can be even mentioned in the glorified cinematic pantheon of Kubrick, Hitchcock and Kurosawa.

On the man himself, and his life, the documentary is more of a mixed bag: Kon was headstrong and confrontational around his art, but remained passionate towards giving animators, those who lower paid anonymous workers who draw characters, do the research, and design of the background for any studio worth its salt, from Ghibli to Studio 4C. He burned bridges, he pushed above-the-line creators, writers and sound designers, to the point of damaging relationships. But was generous, for instance, gave Darren Aronofsky permission, after a casual lunch at a film festival, with no strings attached, to use a key scene from Perfect Blue in Requiem For A Dream.

Two Mamorus, Oshii (Ghost In The Shell, Sky Crawlers), and Hosoda (Summer Wars, The Boy And The Beast), have vastly contradictory interactions and opinions on Kon. They both, as does everyone, recognize his blinding genius. There is some hagiography present in the documentary, for sure, but it does encapsulate criticisms and cognizance for the entire Japanese animation industry, and just how much Kon remained commercial outsider, even as he was a key artistic influencer. Even as every one of his features is culturally, structurally, and personally a masterpiece in its own light.

As the documentary is French, there is ample time given to the influence and collaboration with European filmmakers such as Marc Caro (City of Lost Children) and Christopher Nolan (Inception), the latter of which is essentially Paprika without the identity crisis or cinematic nuance. Even Spiderman makes a cameo with Into The Spiderverse director Rodney Rothman.

In the end, this film is a 80 minute summation and eulogy for Kon Satoshi's legacy and body of work. If it nudges you to give Millennium Actress, Tokyo Godfathers or Paranoia Agent another spin in your BluRay player, or a local repertory cinema to keep programming them in cinema screens, or inspires a storyteller or animator to up their narrative or emotive ambitions, then it has done its job with honour.

More about Satoshi Kon: The Illusionist