Review: GODZILLA VS. KONG, Monster Match Made in Heaven 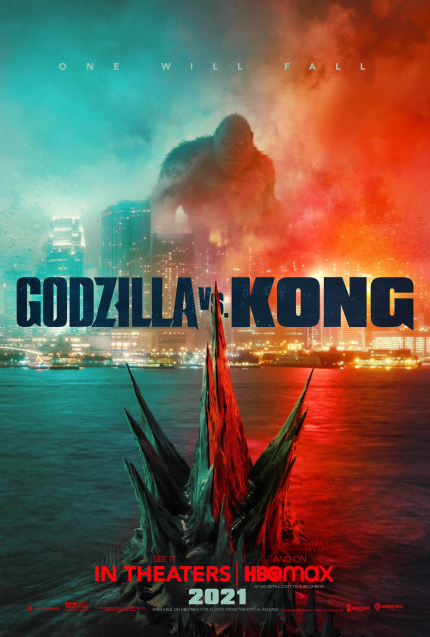 Godzilla vs. Kong
The film is now playing in theaters worldwide. In the U.S., it is also now streaming on HBO Max.

Built to be a big-screen blockbuster, Adam Wingard's Godzilla vs. Kong gloriously destroys cities -- sorry, Hong Kong! -- and gleefully smashes people/pixels into tiny little bits. What's a monster to do?

Eschewing the dysfunctional family dynamics that marked its three predecessors in the so-called "Monsterverse," the fourth installment returns the focus to the titular monsters and features widespread global mayhem. Director Adam Wingard has made a career out of maximizing his material to (mostly) great effect, even if the characters and/or stories themselves sometimes take puzzling turns, in everything from Pop Skull (2007) to A Horrible Way to Die (2010) to You're Next (2011) to The Guest (2014). For me, Wingard's previous two films, Blair Witch (2016) and Death Note (2017) raised my eyebrows more than my pulse, but all his films share a desire to deliver the most bang for the buck.

A lot of bucks are stacked up behind Godzilla vs. Kong and Wingard aims to make the most of what he's got. Eric Pearson and Max Borenstein are credited for the screenplay, based on a story credited to Terry Rossio, Michael Dougherty, and Zack Shields, and the hundreds, if not thousands, of creative artists who designed and executed the visual effects surely deserve credit as well. Frankly, I don't know who is most responsible for what we see on screen, but it is sensational -- depending upon your expectations, of course.

Re-watching the first three films in the modern series, I was struck by how the different directors and their creative teams were able to strike distinctively different chords. I'm no expert on kaiju movies, so I can't comment on which films served as inspiration for each entry, but it's refreshing to see. Godzilla vs. Kong introduces different teams for each warring monster: Kong is represented by the determined Rebecca Hall, bumbling Alexander Skarsgard, and empathetic Kaylee Hottle, while the determined Millie Bobby Brown, sympathetic Brian Tyree Henry, and bumbling Julian Dennison (Hunt for the Wilderpeople, yay!) represent Godzilla. Meanwhile, evil is represented by billionaire Demian Bichir and his daughter Eiza Gonzalez. (Hmm, as a half-Mexican person, should I be offended or proud that two Mexicans portray the primary villains?)

More so than the previous entries, Godzilla vs. Kong knows that pitting giant monsters against each other is a ridiculous premise. So the movie embraces that ridiculous concept in its tone and execution, while also generating great enthusiasm for its approach. Rather than making any suggestion that viewers should 'turn off your brain' -- a phrase I abhor -- the filmmakers encourage viewers to share their love for monster movies, a gentle relief that we can share in public or in private.

Really, it's the kind of movie that is designed to make audiences stand up and cheer, even if you're watching at home in front of your television.

Do you feel this content is inappropriate or infringes upon your rights? Click here to report it, or see our DMCA policy.
Adam WingardAlexander SkarsgardBrian Tyree HenryDemian BicherJulian DennisonMillie Bobby BrownRebecca Hall

More about Godzilla vs. Kong