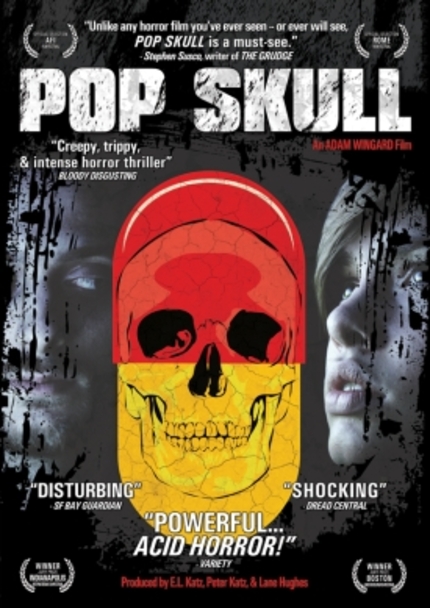 Even though this film has had quite some ScreenAnarchy coverage already, many people still seem reluctant to watch it. Which is a damn shame, as Pop Skull is the first American film in 5 years that gets a full score from me. So here's some more raving and praising.

Wingard is pretty new to the scene, but with Pop Skull he makes sure people will have a hard time forgetting his name. Not that his film will become a big commercial success or cult favorite, but even those that hate it will carry the experience for some time to come. Pop Skull is not an easy film to shed off.

The ironic thing about Pop Skull is that its very core lies one of the most conventional and over-used themes in cinema. Daniel is a rather normal guy that one day finds himself dumped by his girlfriend. Unable to forget her he retreats from social life and even estranges himself. Sounds like a good start for a solid romantic drama featuring moody autumn-like settings and wailing guitar music, but Wingard decides otherwise.

I do believe that Pop Skull can still best be described as a rather straight-forward drama, only occasionally drawing from other genres to enhance Daniel's feelings. There are equal parts mystery and horror mixed in for added effect, but even by saying that you won't have a good impression of what this film is actually like.

Pop Skull plays like a mixture of Vincent Gallo and Tsukamoto with some dashes of Noé. The setting, characters and general mood seem to be lifted from Gallo's films. Daniel is a rather scruffy-looking character, numbed down and floating through life as if he isn't even there. The dark, sharp and brooding drama feels like Noé's territory, and as for Tsukamoto's part, that's where the hyperactive editing, crazy strobe effects and tampered soundtrack come in.

Wingard starts his film with a short epilepsy warning. I managed to suppress a little snigger, but only 10 minutes later it was obvious he wasn't just kidding or playing safe. Daniel's first crazy scene involves some scary use of partial, full and multi-colored strobe effects (the red and blue ones were killer). Later on Wingard goes even beyond by cross-editing certain scenes in a strobe-like manner. Scenes with similar setups are entwined together in one aggressive visual trip, alternating each other every frame.

Crazy editing tricks aside, the film features some strong camera work, an elaborate range of filters and Wingard has a strong sense of color. Most scenes are rather dark but things never become vague or unclear. All of this was done with virtually no budget and in a certain sense it shows in the uncompromising and unrelenting way the film was put together.

The soundtrack is pretty cool too, featuring a various range of electronic and guitar-based ambient tracks, underlining Daniel's moods and granting the film plenty of extra atmosphere. All of this adds up to a very emotive, tangible film that is more interested in making you feel than making you follow a simple narrative.

The film is not overly long but since it is quite demanding that's not really a big problem. You'll have your hands full with all the crazy visuals, mad editing tricks and trippy cuts. The horror aspect is used sparsely but adequately and only helps to further immerse the viewer into the barren world of Daniel. The drama, as simple as it might be, is very strong and effective. Just don't be expecting a straight genre film, Wingard is aiming higher than that.

Films like these don't come around too often, so they should be treasured. It's a difficult film to recommend as it's not really your average drama which can be enjoyed with a bucket of popcorn and a couple of handkerchiefs ready. Pop Skull is an experience that will take you to rather unpleasant places in a pretty straightforward and bold manner. It's the kind of cinema I like and love, so here's to hoping Wingard's next film will be just as impressive.
Tweet Post Submit