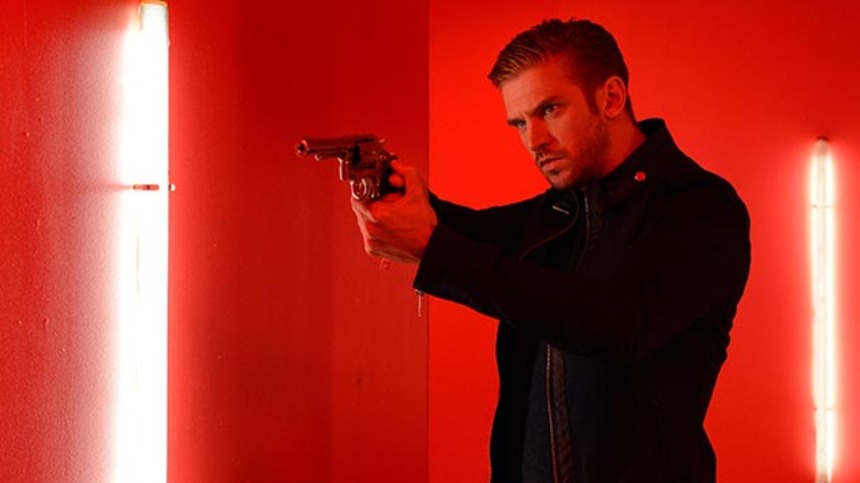 With last year's release of You're Next and contributions to the V/H/S and ABCs of Death horror anthologies, director-writer duo Adam Wingard and Simon Barrett are quickly becoming two of the most exciting filmmakers working in the genre space right now.

This trend absolutely continues with their latest feature, a guns-blazing throwback called The Guest. Equal parts creepy, slow-burn horror and bloody, balls-out actioner, Wingard and Barrett again prove that best kind of genre movie is the one with which you can have the most outright fun.

Set in a small prairie town, the story opens amongst a family grieving the recent loss of a military son. Dad Spencer (Leland Orser) is a middle management hack while Mom Laura (Sheila Kelly) is a lonely housewife looking for some reason to pass the days. Brother Luke (Brendan Meyer) is getting bullied at school and Sister Anna (Maika Monroe) is in a dead-end relationship with a pot-slanging boyfriend. Everything in the household gets upended when the dead son's military pal David (Dan Stevens) shows up on the Peterson doorstep. Polite to a fault, David is quickly embraced by the family and convinced to stay longer than the planned single night.

Soon David is kicking back beers with Spencer, teaching Luke how to stand up the jerks at school and connecting with Anna in ways only a hunky military veteran can connect with a cute 20-year-old girl. But there is more than meets the eye to David's visit and when extremely convenient things such as the timely death of Spencer's superior begin to happen, Anna starts to do some investigating. What she finds sets off a chain of events that launches the film in a decidedly bloodier direction.

Fans of TV's Downton Abbey may need a double take to recognize Dan Stevens as the murderous David. But once they do, they'll never look at the prim and proper Matthew Crawley the same again. Stevens shines in the role of the psychopath, his darkness cutting through his bright charm just enough to belie his sinister motives. This is a leading-man-making role and we're sure to see more of Stevens soon.

The cast rounds out nicely with young Maika Monroe a notable strength. Fans of the current generation of genre films will find plenty of fun nods throughout, not the least of which the excellent casting of Ethan Embry and AJ Bowen in small but enjoyable roles. The moody electronic score by Stephen Moore with music supervision by Jonathan McHugh is also fantastic and will leave plenty of fans lining up for the soundtrack when it becomes available.

But the real triumph here is what we've come to expect from Wingard and Barrett: undeniable enjoyment. In a Wingard/Barrett film, there's no shame in laughing when a real jerk gets his head smashed in and a high school haunted house is the perfect location for a bloody finale -- even if the production design of said haunted house is cool enough to put Universal Studios to shame. Who cares? Just go with it.

It's that attitude that made the genre pics of our childhood so much fun, and it's exactly the reason that The Guest -- and surely whatever these guys decide to do next -- such a wild success.

Do you feel this content is inappropriate or infringes upon your rights? Click here to report it, or see our DMCA policy.
Adam WingardDan StevensSimon Barrett