Review: YOU'RE NEXT Upends Siege And Slasher Conventions 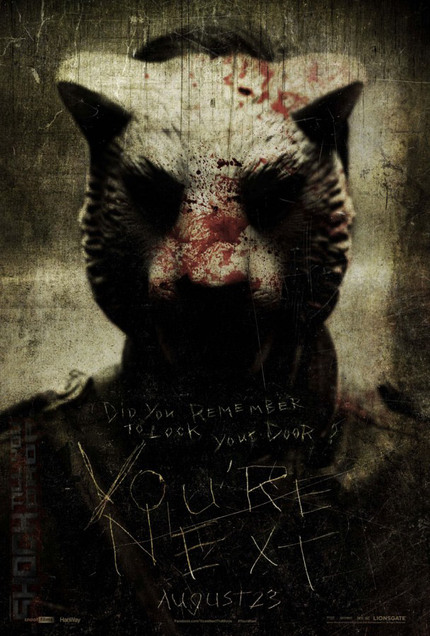 Adam Wingard and Simon Barrett professed, maybe a bit tongue in cheek, at its North American premiere that their intent with You're Next was to make a tight little genre thrill ride that mashed together the opening scene of the original Scream with the slapstick of Home Alone.

An unlikely combination to be sure, but it all comes together in such an entertaining package that by the yardstick of either comedic pratfall or a bloody deconstruction of horror tropes, it has to be labelled a success. Reuniting the principal cast from Wingard's last film, A Horrible Way To Die, Joe Swanberg, AJ Bowen and Amy Seimetz are three of the 'ten little Indians' on an evening of bloody murder.

When Audrey and Rob invite their four children, and their significant others, to a remote mansion in the countryside for a family re-union slash 35th wedding anniversary, they are delighted everyone shows up, if apprehensive of the usual family bickering and posturing for a slice or a handout from Rob's rather large estate. Little do they expect for a crew of Wicker Man animal mask wearing thugs to start shooting up the place with crossbows and stalking the family with machetes and axes.

You're Next, a title veiled in vague promises and threats, according to IMDB has used six times since 1916. I can all but guarantee this is the only one featuring several graphic deaths by multipurpose kitchen appliances and various other household tools. Upending the usual conventions of both the siege film and the slasher (but also paying tribute with a John Carpenter inspired score that kicks in to mighty effect at several opportune moments), You're Next has one of the best 'final girls' since Alexandre Aja's High Tension. Like A Horrible Way To Die, it also has some well-executed plot twists in the mix that feel logical and considered, if morally reprehensible.

Considering the rapid turnaround for this project to come together and yield a complete film - that would be under a year - there is no reason for the director to have the screen writer graphically killed on screen. It's a fun script that walks the tightrope between horror and splatstick comedy without ever shortchanging its large cast of characters.

Best to save all the twists and turns and visual surprises of the film, but suffice it to say, this is a film that should get Wingard noticed outside of the festival circuit. It is a great calling card and a promise: You're Next.