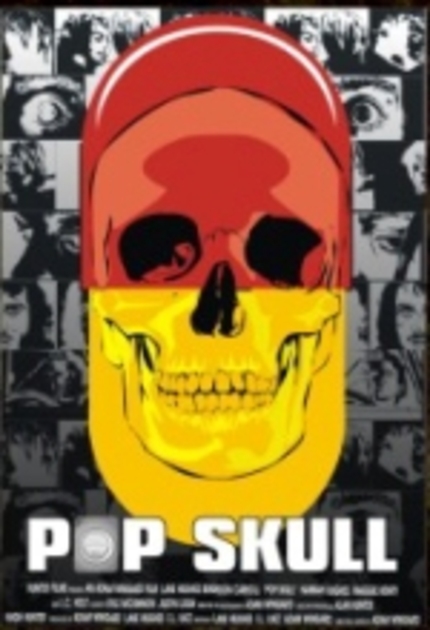 A sonic fury of abstracted imagery bathed in menacing splashes of light and sound, Alabama-lensed indie Pop Skull spins a psychedelic audio-visual web from the life of a lost 20-something on the slope of a debilitating break-up. Mingling genres and styles with abandon, for all its stylistic bombast the film is a surprisingly simple, honest examination of what it feels like to bottom out – an intensely personal experience made real through assured direction and strong performances. Call it what you want - horror, art, a little of both - it rates as a unique experience.

Popping over-the-counter pills and passing out in his parents’ basement has turned routine for Daniel (Lane Hughes) post-losing his long-time girlfriend (to a pretty-boy b-movie actor no less). Increasingly panicked and hallucinating from both his OTC addiction and lack of sleep, Daniel turns to his friend Jeff for support. After rebuffing an advance from Jeff’s live-in girlfriend, Daniel tumbles further downhill and begins to suspect there’s… something in his house – something like the ghosts in his head, only much more real. Unable to control his urges or the voices in his head and his house, Daniel spirals into full-blown madness as he haphazardly charts an irrevocably tragic path.

The sheer audacity of the way in which information is presented in Pop Skull may brand it as more than some viewers can handle. Images build on top of one another, bleeding in and out of reality while the soundtrack pulsates in kind. Eerie banks of fog crest over hilltops, shapes shift in the corners in the frame – the film pulls in a swath of disparate styles but it all jells just right – a living, breathing cerebral stew captured on video.

Despite the above-cited flare, the true beauty of Pop Skull lies in the simplicity of its narrative. To a person, it’s likely we’ve all found ourselves floundering at some point in life. The depths to which Daniel sinks and the path he follows aren't, thankfully, typical for most, but through assured command of technique director Adam Wingard does a fantastic job of transforming emotion into something visible, something palpable – we can relate to the character because we understand him on our terms. It’s no small feat, and a testament to calculation involved in Pop Skull. Despite outward appearances, the film is anything but an avant-garde shotgun blast against a canvas.

Performances, from a mostly regional cast, are uniformly strong. Hughes is front and center for almost the entire film and maintains a spark of life behind Daniel’s malaise that renders his final descent all the more affecting – this is a good person, simply unable to cope and forced into what he perceives to be the only course of action. Brandon Carroll as Jeff and Hannah Hughes as Morgan (Jeff’s girlfriend) turn in solid work in support of L. Hughes’ Daniel.

Already playing to a good deal of acclaim on the festival circuit for some time, Pop Skull has made a strong enough impression on industry-types to garner distribution and representation for Wingard. Adventurous auds are encouraged to take a chance on the film when the opportunity presents itself.