Shudder in February: THE DARK AND THE WICKED, A NIGHTMARE WAKES And Joe Bob Saves Valentine's Day!

Andrew Mack
Editor, News; Toronto, Canada (@Mack_SAnarchy)
Tweet Post Submit
The season of love is coming! Shudder is looking to rekindle our love of horror this February.
In place of flowers and chocolate there will be a new premiere every week: A Nightmare Wakes, After Midnight, Shook and The Dark and the Wicked. Joe Bob Briggs will return with a new Last Drive-In Valentine's special right before the day.
There are also a lot of really great horror flicks coming next month. There is the original Queen of Black Magic, Nic Cage in Vampire's Kiss, Elle Callahan's very cool indie flick Head Count, Giallo flick The Strange Color of Your Body's Tears, horror comedy Basket Case, and Miike's One Missed Call.
Check out the gallery below for all the films and series rolling out next month! 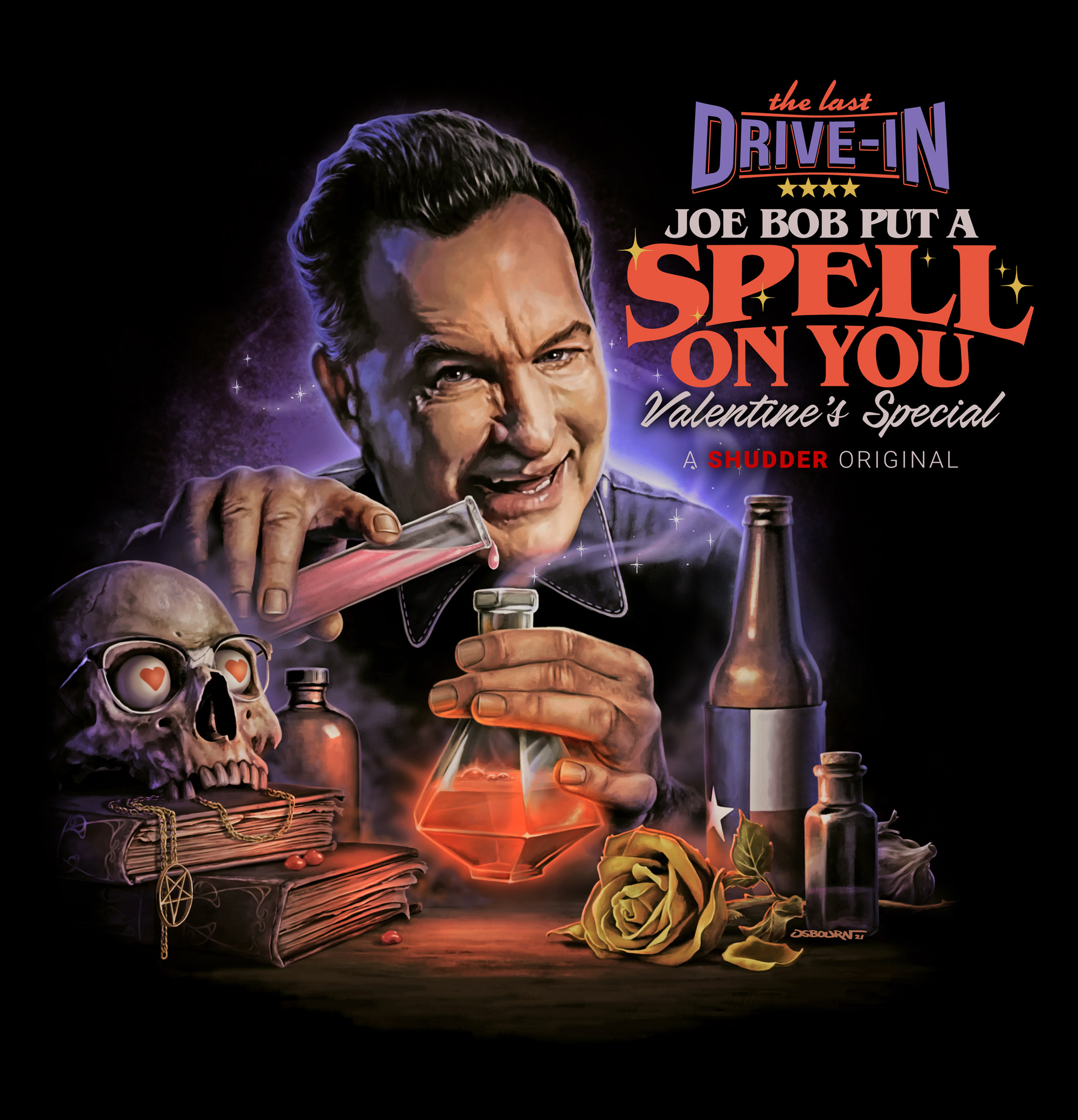 February may be the shortest month of the year, but there’s no shortage of new horror next month on Shudder. Members can look forward to a new Original/Exclusive premiere every week (A Nightmare Wakes, After Midnight, Shook and The Dark and the Wicked), a new Last Drive-In Valentine’s special, new episodes of A Discovery of Witches every Saturday and a bevy of additions to the Shudder library among them the original The Queen of Black Magic (to pair with Shudder’s reboot premiering on January 28), Nicholas Cage favorite Vampire’s Kiss and ‘70s cult classics like Audrey Rose, Psychomania and The Ninth Configuration.

While composing her famous novel Frankenstein, Mary Shelley descends into an opium-fueled fever dream while carrying on a torrid love affair with Percy Shelley. As she writes, the characters of her novel come to life and begin to plague her relationship with Percy. Before long, she must choose between true love and her literary masterpiece.

An unsettlingly intimate portrayal of a brilliant artist at her most troubled, A NIGHTMARE WAKES traces the tortured birth of a timeless masterwork and the rightful ascension of its creator to stand alongside her creation.

Ten years into his small-town, storybook romance with Abby (Brea Grant, Lucky), Hank (Jeremy Gardner, The Battery) suddenly wakes up to an empty home. With nothing but a cryptic note to explain why she left, Hank’s charmed life begins to fall apart. To make matters worse, Abby’s disappearance seems to trigger the arrival of a ferocious creature that crawls out of the old grove on the edge of his property. Directed by Jeremy Gardner (The Battery) and Christian Stella (Tex Montana Will Survive). A Shudder Exclusive. (US only.)

When Mia, a social media star, becomes the target of an online terror campaign, she has to solve a series of tests to prevent people she cares about from getting murdered. But is it real? Or is it just a game at her expense? Starring Daisye Tutor (Guest House), Emily Goss (Snapshots), Nicola Posener (The Bold and the Beautiful), Octavius J. Johnson (Sleepless), Stephanie Simbari (Here and Now) and Grant Rosenmeyer (Crazy Ex-Girlfriend). Directed by Jennifer Harrington (Housekeeping). A Shudder Original. (Also available on Shudder Canada, Shudder UK and Shudder ANZ) 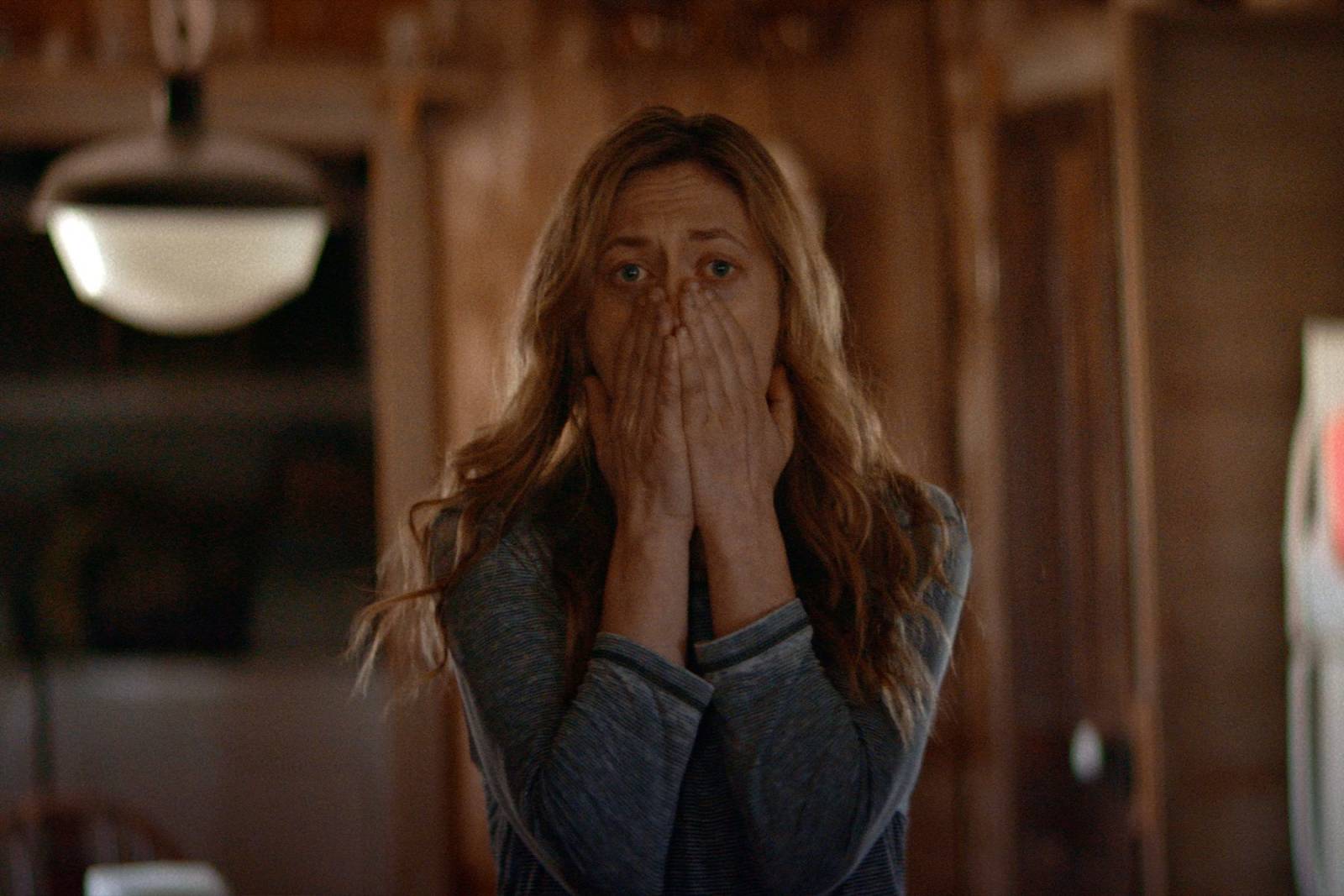 THE DARK AND THE WICKED — premieres February 25

On a secluded farm, a man is bedridden and fighting through his final breaths while his wife (Julie Oliver-Touchstone, Preacher) slowly succumbs to overwhelming grief. Siblings Louise (Marin Ireland, Hell or High Water) and Michael (Michael Abbott Jr., The Death of Dick Long) return home to help, but it doesn’t take long for them to see that something’s wrong with mom—something more than her heavy sorrow. Gradually, they begin to suffer a darkness similar to their mother’s, marked by waking nightmares and a growing sense that an evil entity is taking over their family. Directed by Bryan Bertino (The Strangers). A Shudder Exclusive. (Also available on Shudder Canada, Shudder UK and Shudder ANZ) 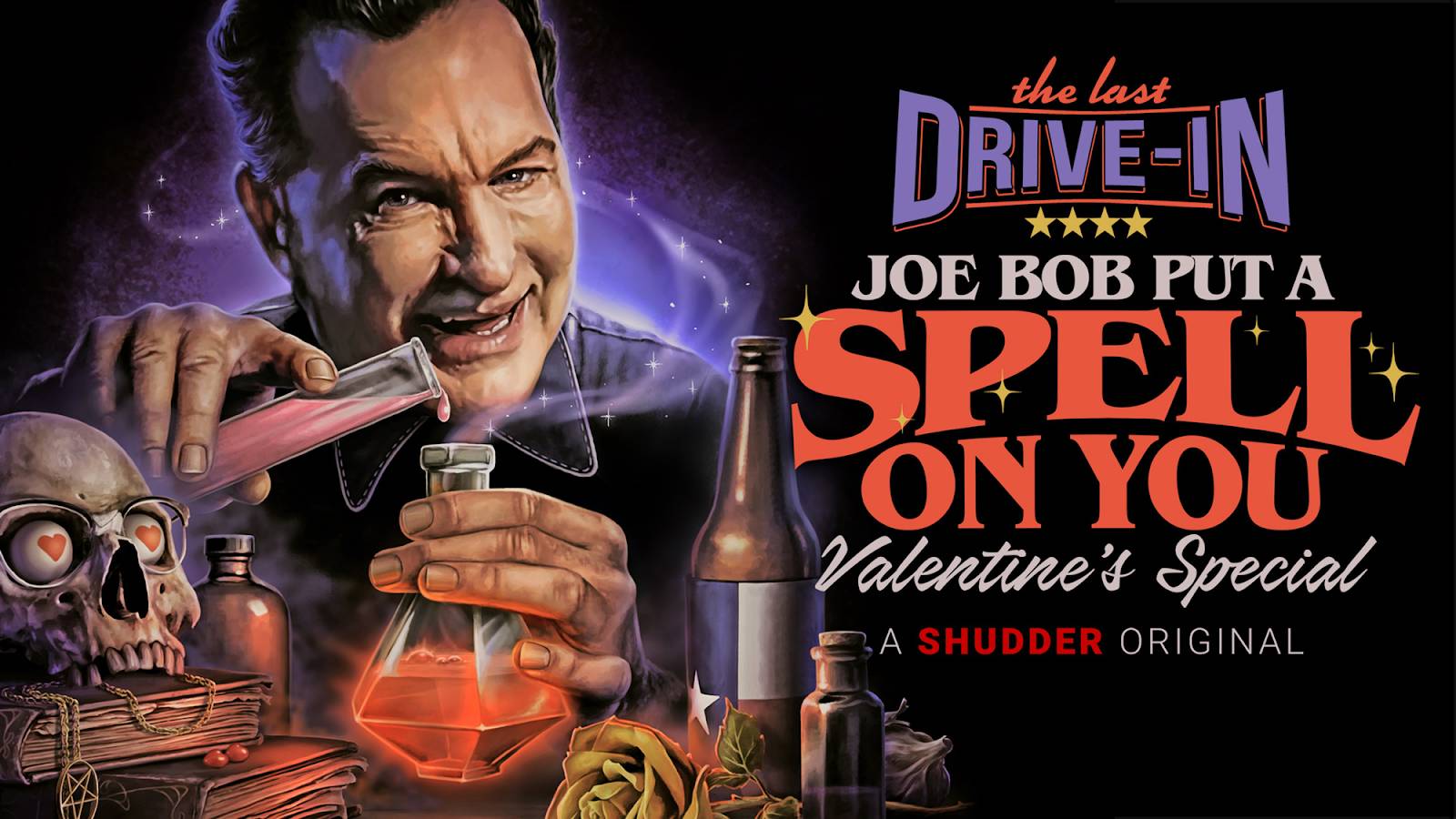 Love is in the air for the first-ever Last Drive-In Valentine’s Day special! Joe Bob Briggs hosts a double feature of two unusual films about the power (and horror) of love. Dim the lights, pour a glass of bubbly—Dom Perignon or Lone Star, your choice—and join us on the Shudder TV feed for the live premiere Friday, February 12, or watch on demand beginning Sunday, February 14.

In this haunting, psychological horror directed by a true master of the genre, a happily married couple find their lives thrown into frightening disruption when a stranger appears at their door claiming that their adopted 12-year-old daughter contains the reincarnated spirit of his little girl. Starring Marsha Mason, Anthony Hopkins, John Beck, Susan Swift. (Also available on Shudder Canada)

A woman is accused of being a witch and thrown to her death over a cliff. A strange man rescues her, nurses her back to health, and tells her that she must master black magic in order to exact vengeance on her tormentors. Starring Suzzana, Alan Nuari, Siska Widawati, WD Mochtar (Also available on Shudder Canada, Shudder UK and Shudder ANZ)

Note: This 1981 Indonesian horror classic was the inspiration for Kimo Stamboel’s The Queen of Black Magic, a Shudder Original premiering January 28.

After a night of passionate lovemaking in which he is bitten on the neck, a troubled literary editor becomes convinced that he is a vampire and begins to live the role. Audiences in 1989 may not have been ready for Nicolas Cage’s unleashed, expressionistic performance (some in 2021 aren’t either), but the film has become an essential watch among Cage connoisseurs. Starring Nicolas Cage, Maria Conchita Alonso, Jennifer Beals, Kasi Lemmons (Also available on Shudder Canada)

Newcomer Evan joins a group of teens on a getaway in Joshua Tree. While exchanging ghost stories around the campfire, Evan reads aloud a mysterious chant from an internet site. From that moment, someone—or something—is among them. As unsettling, inexplicable events become more frequent, Evan realizes this summoned shape-shifting creature is targeting them to fulfill a deadly ritual. Starring Isaac W. Jay, Ashleigh Morghan, Bevin Bru, Billy Meade, Hunter Peterson, Chelcie May (Also available on Shudder Canada and Shudder UK)

A DISCOVERY OF WITCHES episode 205 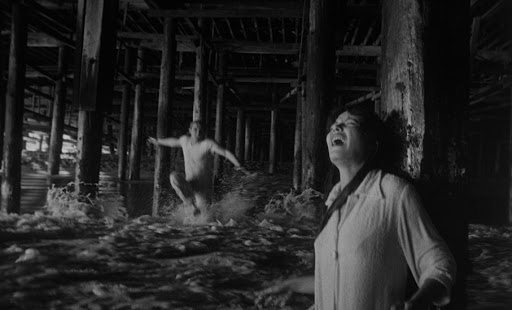 In this eerie ‘60s thriller from the director of Queen of Blood, Johnny begins dating a woman who thinks she may be a mermaid. Encounters with a witchy woman and the fact that her exes both drowned slowly convince Johnny that staying with her may be dangerous. Fans of mysterious, mid-century horror like Cat People, The Seventh Victim and Carnival of Souls shouldn’t miss this uniquely moving fright flick, which drew on underground filmmaking styles to create an experience decades ahead of its time. Starring Dennis Hopper, Linda Lawson, Gavin Muir (Also available on Shudder Canada)

A new teacher's arrival initiates a gruesome series of events at a private school in this acclaimed series of hit horror films based on high school urban legends in South Korea.

In this dread-filled debut, a former student returns as a teacher. When she strikes up a new friendship with two students, the bodies begin piling up and ghosts haunt the hallways. Starring Choi Kang-hee, Kim Gyu-ri, Kim Roe-ha (Also available on Shudder Canada)

Young student Soh Min-ah finds a diary kept by two senior students, a lesbian couple ostracized for their relationship. When one of the students kills herself, the diary causes Soh Min-ah to experience strange visions and supernatural occurrences as the guilty parties get their comeuppance. Starring Kim Gyu-ri, Park Yeh-jin, Lee Yeong-jin (Also available on Shudder Canada)

When best friends Jin-sung and So-hee are driven apart by a ballet competition, Jin-sung visits a magic staircase which grants wishes to those who step on it and asks to win the contest. But when her wish leads to So-hee's death, Jin-sung returns to the stairs to try to undo her deadly deeds. (In Korean with English Subtitles). Starring Song Ji-hyo, Park Han-byeol (Also available on Shudder Canada) 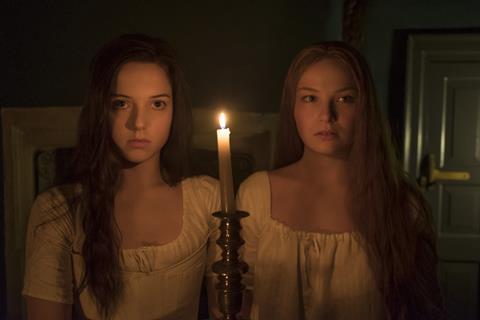 Isolated from the outside world, fifteen-year-old Lara lives in seclusion on a vast country estate with her father and strict governess, Miss Fontaine. When a mysterious carriage crash brings a young girl into their home to recuperate, Lara immediately becomes enchanted by this strange visitor who arouses her curiosity and awakens her burgeoning desires. Inspired by the 1872 Gothic vampire novella by Joseph Sheridan Le Fanu. Starring Tobias Menzies, Jessica Raine, Greg Wise, Hannah Rae, Devrim Lingnau (Also available on Shudder Canada)

This visually stunning Belgian giallo homage follows a man who returns home from a trip, only to find his wife missing. Seeking answers, Dan visits his nasty neighbors who draw him into a surreal mystery that gets stranger and stranger. Is there a conspiracy at work? How many secret passages does the building have? And where is Dan’s wife? Starring Klaus Tange, Ursula Bedena, Joe Koener (Also available on Shudder Canada)

JOE BOB PUT A SPELL ON YOU

A DISCOVERY OF WITCHES episode 206 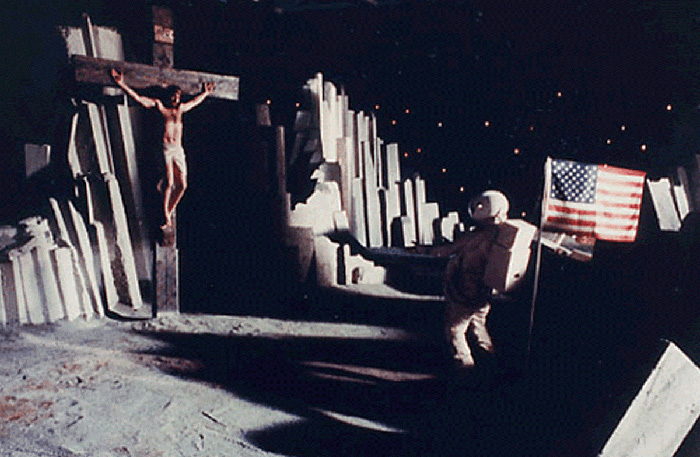 A troubled psychiatrist takes command of a military asylum filled with insane soldiers in this creepy only-in-the-’70s oddity written and directed by the writer of The Exorcist. When Kane arrives at an army castle to cure the inhabitants, he bonds with an astronaut who snapped before a mission. But as the two men examine their demons, it becomes clear Kane may be more in need of help than his patients. Blatty’s unsettling mix of psychological horror and Altman-meets-Joseph Heller-esque comedy has fascinated die-hard cult cinema fans since its release in 1980. Starring Stacey Keach, Scott Wilson, Jason Miller, Ed Flanders (Also available on Shudder Canada)

Mary harbors a dark history but must confront her past when a hunter with magical powers is assigned to capture her and kill her son. As the terrifying cat-and-mouse game continues, a deadly fear takes hold as locals begin to die at the hands of an unknown creature. Combining dark arts with street-level realism, Outcast is an underseen UK chiller from the director of The Girl with All the Gifts. Starring James Nesbitt, Kate Dickie, James Cosmo, Niall Bruton (Also available on Shudder Canada and Shudder UK)

A DISCOVERY OF WITCHES episode 207 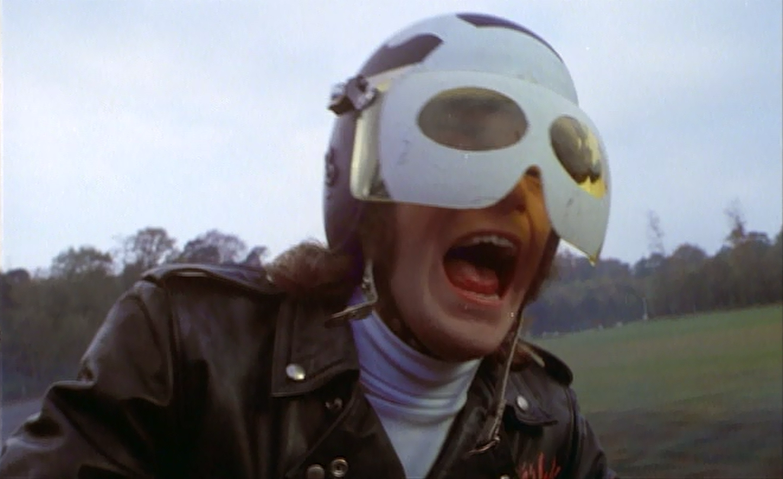 Student Yoko receives a phone message from her future self, ending with her own death scream. Two days later, she dies in a horrific accident. As the mysterious phone curse spreads, claiming more young lives, Yoko’s friend Yumi joins forces with detective Hiroshi, whose sister met the same gruesome fate. But can they unravel the mystery before the clock runs out on the next victim–Yumi herself? Starring Ko Shibasaki, Shin'ichi Tsutsumi, Kazue Fukiish (Also available on Shudder Canada, and Shudder UK)

A delusional woman who set her brutal serial killer boyfriend on fire has just been released from a mental hospital. Her vulnerable demeanor helps her get a job at an all-night gas station. However, left alone to her own devices, her paranoia and hallucinations return with furious consequences. Starring Vanessa Grasse, Brendan Fletcher, Emily Tennant (Also available on Shudder Canada)

In this beloved ‘70s mind-blower, a motorcycle gang burst from their graves to crush a world of psychedelic hippie pleasures under the wheels of black leather occult mayhem. Starring George Sanders, Beryl Reid, Nicky Henson (Also available on Shudder Canada)

THE DARK AND THE WICKED

A DISCOVERY OF WITCHES episode 208

More about The Dark And The Wicked

More about Something Else