Now Streaming: BLOOD QUANTUM, How We Eat Our Own 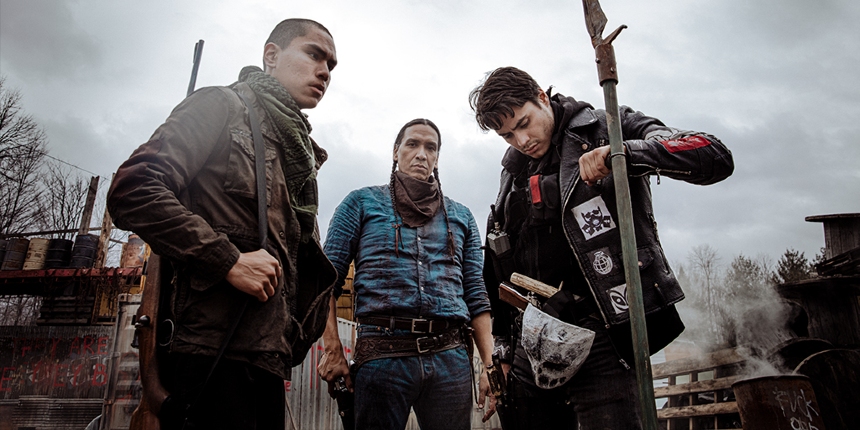 It is 1981, and a lone police car drives purposely, if slightly lost, through the Northern Canadian forest. Its bright red cherries offer little light, and function more of a quiet warning to the wilderness which surround it. The Police chief is on his way to another domestic disturbance between a drunk and his wife. While there are many images of bombastic significance, I think the recurrence of this one is the one that sticks the most; intentionally or not.

At one point in Jeff Baranaby's visceral, and acutely violent, zombie epic, a mother eats her own baby. The scene is certainly not for the faint of heart, but if one can step back from such in-your-face imagery, it is as loaded a metaphor as any. Blood Quantum less a movie about hope, and more one about how we eat our own.

This is what the Zombie movie has always done best - provide a splattered canvas for projecting our cultural habits and fears. Be it Haitian sugar plantations fuelled by capitalistic power, guilt and greed, American racial tensions in the 1960s and beyond (or the depressing blight of suburban shopping malls).

But here is a not so secret about zombie movies. It is always less about the zombies, and more about the living's internalized social (and structural) fears. Zombie movies are generally about how much we suck as people, when we are scared of The Other.

It is quite fitting that Barnaby flips the colonial script, and posits an undead apocalypse where the First peoples are immune to the zombie plague, and put into a position of privilege, shall we say, while still having their space encroached upon. At one point in the film, a white refugee demands that his 'host' speak English. Demands. This should prove rather uncomfortable for many viewers as the prevailing winds of administration and authority are demonstrated, in bold capital letters, to be fickle.

There are, more or less, three narratives vying for space in Blood Quantum. The first is a savvy distillation of iconic images from Canadian 'authority' facing off against first peoples. It is a subconscious primer for those many for which history has tossed aside because they seem at odds an imposed Canadian identity.

Particularly on display is the Quebec Oka Crisis of 1990, but many others as well. An iconic bridge is effectively used to frame the divide between the white zombies (sorry, I could not resist). Only this time it isn't about occupying the bridge for change, here there is a mechanical grinder which the reservation pragmatically (and with maximum gore) deals with the issue. A character also takes an epic shit on the bridge, but that is best left discovered in situ.

The second film is a rip-roaring comic-book zombie fantasy. Barnaby is well versed in the genre, and peppers (perhaps too liberally) iconic zombie kills across the film that fans will certainly recognize. Like the director's cut of Walter Hill's The Warriors, he also frames transitions between chapters, as it were, with animated sequences to underscore this particular head-space. The film is lit with torches, and soaked in blood.

And the third film is leans heavily towards a character driven family drama. Reservation Police Chief Traylor (Fear the Walking Dead's Michael Greyeyes) is dealing with the complex relationship with his two sons from different mothers, and the reckless way they feed each other's pain into an ever increasing misguided loop. Lysol, Traylor all but abandoned a sa child has grown into a violent, substance abusing, shit disturber.

Joseph, who is more grounded and empathetic (and takes after his mother who is still in the picture, but given shockingly little to do), but nevertheless has has knocked up his white teenager girlfriend, with all of that complexity. Traylor and his wife are trying to clean up the mess of their domestic history, but it is a mess too big to sweep. History is baggage.

Over the course of Blood Quantum, all three of these threads vie uneasily for dominance. The concept is astute and sharply executed. The cast is more than up to task of navigating the mood and tonal shifts of the picture, but the editing and screenplay (which leans a tad much on using Fuck as a sentence ender) struggle to reconcile a loving reveaance for the sub-genre, and the very real political pain it is trying to exorcise.

The people often get lost in the shuffle. Perhaps that is the point.

Review originally published during the Toronto International Film Festival in September 2019. The film is now streaming on Shudder in the U.S., UK and Ireland. In Canada, the film is available to rent or own across all Video On Demand platofmrs.

Do you feel this content is inappropriate or infringes upon your rights? Click here to report it, or see our DMCA policy.
1981CanadaIndigenousJeff BarnabyOka RightsShudderThe BridgeZombies