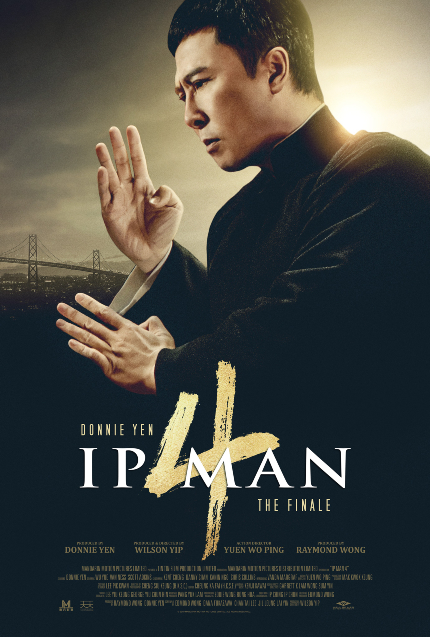 The fourth entry in a popular series, Ip Man 4 is built around a "very strong idea" intended to be "very appealing to a wide audience and have a message that people will appreciate. ... We're all confident that it's going to deliver."

That's what Donnie Yen told Mike Leeder in an interview we were very happy to publish last year and, now that we've taken a gander at the trailer, we must say: Yes. Oh my, yes.

As Yen pointed out, it's rare to make four films in a series with the same star, key crew, director (Wilson Yip) and screenwriter (Edmond Wong) and producer (Raymond Wong). Here's the official synopsis from Well Go USA, which will be releasing the film in the US on December 25:

"Ip Man's life remains unchanged after his wife's death, but he and his son are slowly drifting apart. To seek a better future for his son, Ip Man decides to travel to the U.S. only to find the stable, peaceful life abroad is only skin deep. Underneath lies a deep rooted racial discrimination that is far worse than he has expected. Ip Man re-examines his position and ponders on the reason he took up martial arts in the beginning."

Yen was born in China and then lived in Hong Kong for several years before he and his family moved to the U.S., so I can't help but think his own experiences may have helped shape the story, even though he doesn't mention this in the interview. What is clear, however, is that Scott Adkins lends the nasty edge to the supporting cast, and Master Yuen Wo Ping is noted as action director, so I am very happy in anticipation.

Visit the official Well Go USA site to see where the film will be playing and even more information. Watch the trailer below.

Do you feel this content is inappropriate or infringes upon your rights? Click here to report it, or see our DMCA policy.
Donnie YenIp ManIp Man 4Scott AdkinsWilson Yip