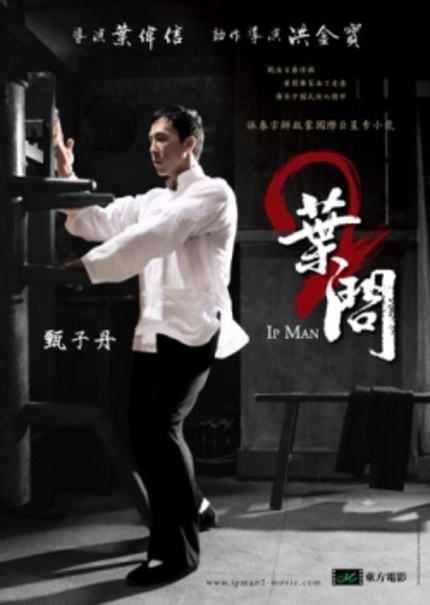 The magic Hong Kong action duo, (Wilson) Yip and (Donnie) Yen, are back for more. After the first Ip Man film became quite the success a sequel couldn't be avoided, even more so because the current Yip Man hype (with Herman Yau and Wong Kar-Wai joining in) is still raging around the globe. So if you feel comfortable watching 120 minutes more of the same, Ip Man 2 has everything to keep you glued to your seat. The film has been adequately covered by ScreenAnarchy in the past, but I believe it's important to set your expectations straight when watching this film, so here goes:

Even though I really liked the first Ip Man film, I was still a bit surprised by the critical acclaim it gathered around the world, even earning fans where you normally wouldn't expect them. I myself prefer the more gracious and dancelike martial arts forms, but apparently audiences also dig the more factual, precise methods of Wing Chun. Maybe because it's a bit more down to earth and it looks doable without a whole set of wires, an often cited critique on films like Hero or House of the Flying Daggers.

Ip Man 2 simply starts where the previous film ended. We get some quick flashbacks to freshen up our memories and we see how Yip Man moves away from his old town to try his luck in Hong Kong, setting up a small martial arts school for Wing Chun trainees. For those of you expecting Bruce Lee to join the school right away, pack up your hopes because his character only gets a little cameo at the very end of the film. This film is all about Yip Man settling down (the first hour) and defending the honor of the Chinese once more (the second hour).

In that sense this sequel follows a very similar structure to the first film, only now the Japanese are traded in for the British and Sammo Hung has joined the crew to liven up the first part of this film. Needless to say, if you're hoping for a realistic, historically sound biopic, Yip's Ip Man films probably aren't really meant for you. Better to wait for Wong Kar-Wai's version I presume.

Visually Ip Man 2 proves a slight step up from the original. The locations, costumes and general setting all look lush and detailed. The camera work is grand and stylish, while the editing perfectly illustrates the essence of the Wing Chun style. Controlled, stemming from defence, but lethal when going for the kill. It really helps the action scenes to flourish and provides a nice change of pace from the dramatic scenes.

The soundtrack is just as grand, only a bit more generic in nature. A bit overblown at times, but subtle and beautiful in other scenes. It's a typical Chinese score which usually goeswell with these type of historical big-budget films. Ip Man 2 isn't really the kind of film to play with originality in its soundtrack of course, but I believe the genre could use some fresh impulses on a musical level. As it stands though, the soundtrack does the job.

Just like the first film, Donnie Yen is absolutely perfect for the role of Yip Man. His slight smile, his compassionate eyes, the perfect control over the martial arts he puts on display ... he's a real joy to behold and quite easily carries the film all by himself. Sammo Hung is still pretty agile for his age (and size), the others don't get much beyond being simple cameos. Sadly, the British actors are complete nobodies with no visible acting experience whatsoever. It's a known fact that Asians have trouble scouting good English-speaking actors, but it's been a while since I've seen such horrible casting. Luckily they are mostly there to get their faces pounded by Yen, so it's not all bad.

Ip Man 2 is very much like the first film, so your appreciation will greatly depend on your expectations. If you watch this film too close to the first one, or if you expect to fully relive the wonders of the first film, Ip Man 2 will never be able to top it's older brother. If on the other hand you can accept that this film is pretty much a carbon copy of the first, only filled with new fight scenes and a slightly different setting/different bad guys, than nothing will stand in your way of enjoying this just as much as the first film.

The acting of the British will probably appal you, the cameos of characters from the first film don't really bring much to this sequel (Simon Yam is incredibly underused) and the schism between both parts is a little too obvious, but all of these critiques fade away when Yen and Hung are battling on a single table top, playing a game of full contact chess.

Ip Man 2 is pretty much what I expected from it, and I just couldn't have asked for more. Visually a little better than the first film, awesome fight sequences where Yen is allowed to shine and a fully satisfying finale where the final blow caused a big fat inner "Yeah!". This is as far as Wilson Yip needs to take the Yip Man saga though, something he seems to realize as well as he's now doing his own take on A Chinese Ghost Story. Good stuff.