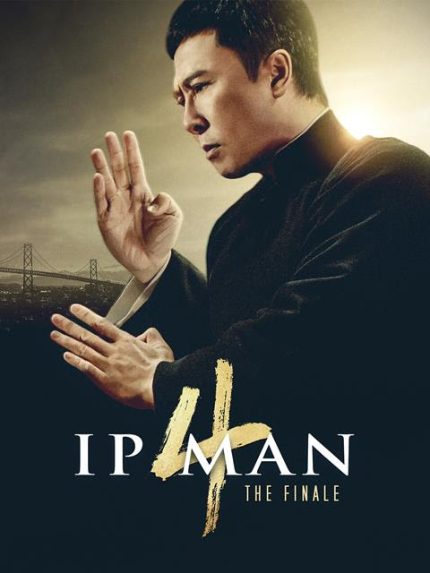 Somehow, I missed Ip Man 4: The Finale when it opened in U.S. theaters a million years ago -- actually, December 2019 -- but now that the film is arriving on home video, it's a splendid time to catch up.

The fourth and concluding (?!) film in a series features the same star, key crew, director (Wilson Yip) and screenwriter (Edmond Wong) and producer (Raymond Wong). Add in Scott Adkins as a nasty American and plenty of bewildered young people, and it looks like a winner.

Per the official synopsis, the film"follows kung fu legend Master Ip on his journey to San Francisco, where his prodigious student Bruce Lee has opened a wing chun school and angered the local martial arts community. Soon after arriving, however, Master Ip finds himself facing a much deadlier threat."

Now, it's true that the film is set in 1963 and makes no mention of kicking virus butt, but I lead a rich fantasy life in which martial arts masters are also masters of contagious diseases and know how to harness their powers to cure all kinds of afflictions. Also, I'm hoping that the film will provide escape from thinking about this horrible pandemic that is claiming hundreds of lives.

Ip Man 4: The Finale will be available on a variety of Video On Demand platforms as of Tuesday, April 7, 2020. Visit the official site for ordering links and more information. Enjoy watching the trailer below.

Do you feel this content is inappropriate or infringes upon your rights? Click here to report it, or see our DMCA policy.
Donnie YenIp ManIp Man 4Scott AdkinsWilson Yip