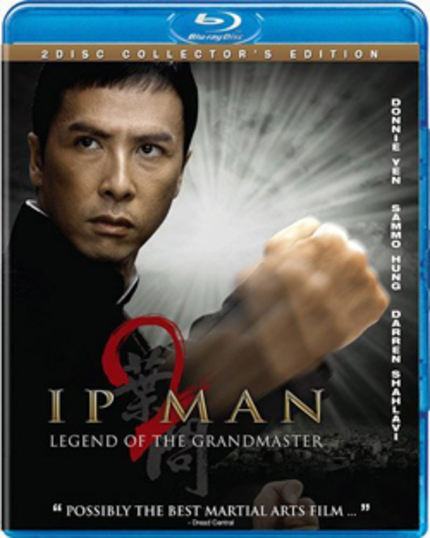 Ip Man 2 is a film that has been covered pretty thoroughly by ScreenAnarchy over the last year and a half.  Most of the reviews have been pretty positive.  I didn't give my take on it, but I think it falls within the general consensus of the group here.  Seeing that there are no less than four or five reviews of the film on ScreenAnarchy, I will spare you my detailed opinion.  Suffice to say that I thoroughly enjoyed the film in spite of itself.  The plot and script are pretty weak, but the action setpieces more than make up the difference.

Donnie Yen is probably the finest martial arts actor working today.  An argument could be made for Jet Li, but he seems to be moving away from the pure martial arts roles in a way that Donnie Yen hasn't quite done, yet.  The three big action sequences in this film, all choreographed and directed by Sammo Hung, are technical and athletic marvels.  The fish market fight is a classic 100 on 1 battle scene, that leaves dozens of flunkies in the dust while Yen's Ip Man beats them all senseless.  The table top scene is an ingenious bit of action choreography that is unlike anything I've seen, and the balance required, even with actors on wires at times, is astonishing.  The only one that I'm less than wowed by is the final fight with the Twister.  This just smacks of nationalism and really has very little to offer in the way of technical or creative skill.

Overall, though, Ip Man 2 is a fast paced ride through 1950's post-war Hong Kong that showcases many different fighting styles and even gives Yen a little bit of room to spread his acting wings.  Yen and Hung are both formidable presences on screen, and my only regret for this film is that Fan Siu-Wong isn't used to his full potential.  Fan was an integral part of the success of the first film, and his appearance in this one leaves a lot of talent on the table.

Fans of Ip Man need not debate over purchasing this disc.  Well Go has put a lot of push behind Ip Man 2, both on the big screen in festivals and in a theatrical run earlier this year.  They wanted to get the home video right and make this an all-around success and they've done it.  The video on this release is stunning with bold colors, razor sharp details, and a healthy sheen of grain across the image that gives it the kind of filmic look that can only be found in quality Blu-ray discs.  The audio is just as good, razor sharp with crisp dialogue and potent background and effects sound.  The familiar Ip Man score also sounds beautiful from the first frames of the opening credits.  Well Go offers the original Cantonese in a DTS-HD 5.1 track, as well as Mandarin DTS-HD and English DTS-HD tracks.  I only sampled the Cantonese track, but it was awesome.

For this collector's edition, Well Go have provided a second DVD exclusively for extras.  The second disc includes several featurettes.  These include a look at the sets that were created for the film, which, it turns out, took a lot of work in order to create an authentic feeling 50's Hong Kong.  There is also a brief shooting diary with Wilson Yip.  There are almost 10 minutes of deleted scenes, mainly consisting of a longer dinner sequence with Sammo Hung's family and alternate takes from Yen's final fight with Darren Shahlavi (Twister).  The longest extra is a series of interview with all of the major cast that adds up to an hour or more of video.  All of these extras from the DVD are non-anamorphic full-screen.  On the Blu-ray, Well Go have included an 18 minute making of in 1080i high definition and a set of trailers.

This collector's edition is packed with bonus content and provides the feature with an absolutely beautiful and faithful transfer and audio mix.  Highly recommended.  Well Go are doing excellent work on Blu-ray and I can't wait to see Legend of the Fist later in the year!