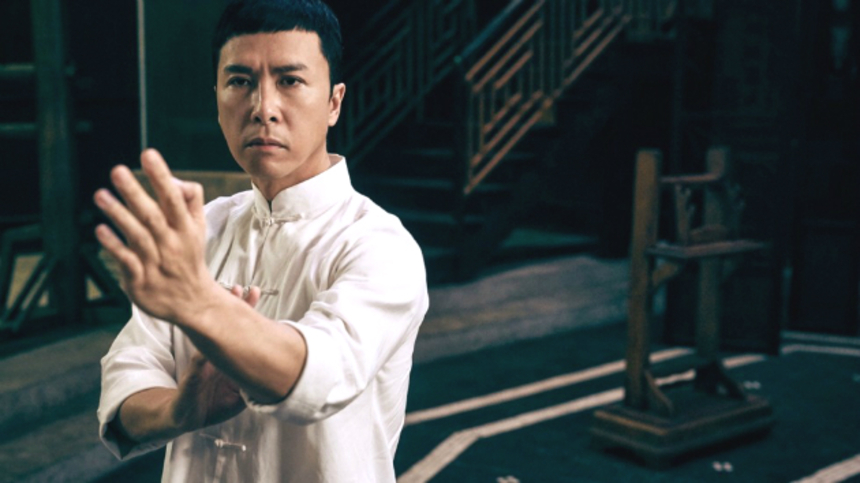 In Ip Man 3, Donnie Yen returns for another outing as legendary martial arts instructor Ip Man. Still under the direction of Wilson Yip, the newest installment trades Sammo Hung for Yuen Wo-ping as action choreographer, ensuring that the extended fight sequences remain the focal points for the narrative.

Structurally, Ip Man 3 is closer to Ip Man (2008) than Ip Man 2 (2010), in that it's more easily divided into multiple chapters in the life of the titular character. Rather than the first film's wartime tragedies, however, the focus narrows to an even more personal story, in that Ip Man's loyal and supportive wife Wing Sing (Lynn Xiong) must deal with a life-changing illness.

In the first two films, Wing Sing remained dutifully in the background, caring for the couple's young son as well as household duties and then taking on the additional responsibility of pregnancy while not seeking to disturb her husband, though she did occasionally grumble about his neglect of his family. Her discontent rumbles into the foreground in the new film, even before she is diagnosed with a serious disease.

The film begins in 1960, some 10 years after the events in Ip Man 2, and Ip Man is now well established in Hong Kong, having built a reputation that draws a constant stream of admirers whenever he is sighted in public. His oldest son is now away at school, but his younger son is still apt to get into fights with schoolmates, one of which leads Ip Man to make the acquaintance of Cheung (Max Zhang). It turns out that Ip Man and Cheung received training from the same wing chung instructor, which proves to be handy when trouble is stirred up at the school where both their sons are attending.

American gangster Frank (Mike Tyson) is the source of the trouble; he wants to buy the school for the property it sits on, but the headmaster refuses, leading Frank to send waves of his men to convince the headmaster otherwise. Ip Man rallies to the defense of the school, which causes the attacks to ratchet upwards. Writer Edmond Wong, collaborating again with Chan Tai-Li and for the first time with Leung Lai-Yin, has been teaming with director Yip for years, and he expertly allows space in the story for fights and action scenes to break out with the necessary frequency. Cheung Ka-Fai, one of my favorite film editors, keeps the pace from ever slowing down, even when it dips into the expected melodramatic sequences.

Of course, the main reason anyone comes to a Hong Kong action movie is the action and, rest assured, it's terrific. Hung and Yuen have somewhat different action styles, with the former leaning toward close-quarter conflicts and the latter favoring extravagant set-pieces, and Ip Man 3 is well built to showcase an absolutely mesmerizing "one against many" sequence that will please any devoted fan of Hong Kong action movies.

(To be sure, the movie doesn't reach the giddy heights of the classic collaborations between Yen and Yuen in Once Upon a Time in China II or Iron Monkey, but it certainly acquits itself well.)

As if that weren't enough, the movie also features an intense, incredibly well shot battle between Yen and Tyson that, happily, is quite different than the boxing match between Yen and Darren Shahlavi in Ip Man 2, and eventually builds to a climactic battle that is eminently satisfying.

The personal story, however, is what holds greater resonance, especially for anyone who has dealt with life-threatening family illness. Ip Man 3 could easily have been just another sequel, but as Donnie Yen considers his possible retirement as a full-fledged action star, it feels entirely fitting that he showcase once again his dynamic, often breathtaking skills in a movie that is entirely entertaining while also being entirely respectful to the legendary Ip Man.

Ip Man 3 opens in select theaters in the U.S. on Friday, January 22, via Well Go USA.