Notes on Streaming: THE 3RD EYE 2 Plunges Deeper Into the Indonesian Spirit World 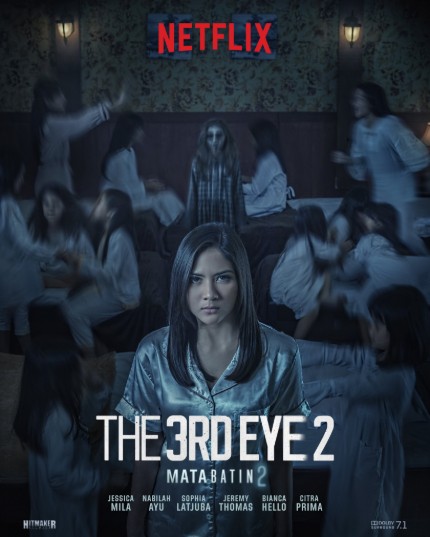 Why is Rocky Soraya trying to scare me?

The first film in a possible series, released last year (and available on Netflix), could be described as a somewhat twisted tale of two sisters, as older sister Alia (Jessica Mila) returns home to Indonesia after a death in the family left her younger sister Abel (Bianca Hello) alone.

Young Abel has been seeing frightening spirits for her entire life, but her family never believed her, so Alia decides to resolve things by consulting spirit adviser Mrs. Windu (Citra Prima). Mrs. Windu opens up Alia's so-called "third eye," which soon convinces Alia that her younger sister was right all along. Things get progressively more hairy and haunted from there.

The sequel picks up one year after the events in the first film. Alia starts work at an orphanage after yet another tragedy in her family. There, she teams up with young Nadia (Nabilah Ratna Ayu Azalia), who also has an open third eye, and they must defeat another evil force that erupts at the orphanage, connected both to owner Mrs. Laksmi (Sophia Latjuba), her husband Mr. Fadli (Jeremy Thomas), and Alia's own family.

Both films are filled with the expected gross-out moments, but largely rely on our sympathy for the women who must deal with unsavory, unappealing and unsympathetic men. This seems like a good tack to take in the modern day.

Pumped up slightly from the first film, with more gruesome-looking extras and presumably more money for props to go flying and breaking, The 3rd Eye 2 alternates jump-scares with explanations of how to defeat the spirits that plague Alia and her friends. Mrs. Windu explains another aspect of the third eye that allows for more variety in the frights. Produced and directed by Rocky Soraya (The Doll and The Doll 2, which I've just realized are available on Netflix and linked accordingly), the film modestly delivers on what it teases.

My knowledge of Indonesian horror has been limited to the unsettling, definitely creepy films by Joko Anwar and the pumped-up thrill rides by Timo Tjahjanto (both solo and in partnership with Kimo Stamboel as The Mo Brothers), so for me it was enjoyable to watch another filmmaker wrestle in a somewhat more deliberate (i.e. less creepy and unsettling, slower-paced) fashion. Also, I was surprised to see how the horrors were placed in context with more mainstream religious beliefs.

Do you feel this content is inappropriate or infringes upon your rights? Click here to report it, or see our DMCA policy.
IndonesiaJessica MilaNetflixRocky SorayaThe 3rd EyeThe Third Eye

More about May the Devil Take You