Notes on Streaming: MAY THE DEVIL TAKE YOU Delivers a Horrifying Sugar Rush 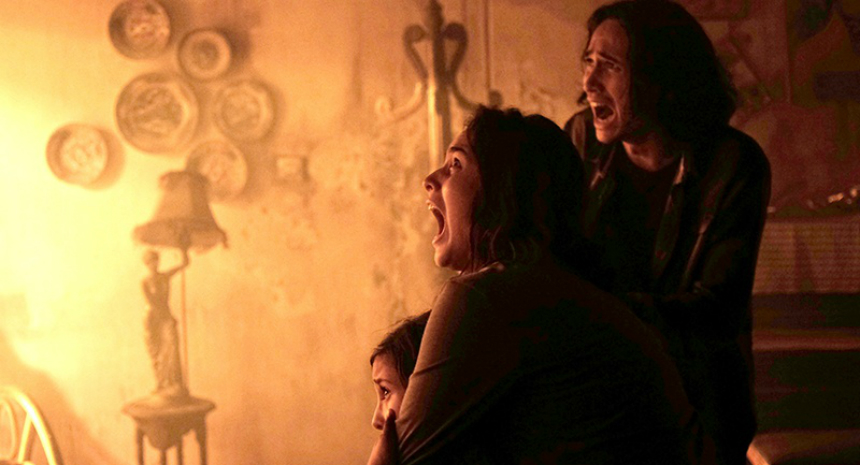 Recently enjoying its North American theatrical premiere at Fantastic Fest, Timo Tjahjanto's May the Devil Takes You (original-language title: Sebelum Iblis Menjemput ) arrives today on Netflix and it's a must-watch for horror fans.

Tjahjanto also recently directed The Night Comes For You, an extremely violent action spectacular that debuted on Netflix (available with Bahasa Indonesia subtitles) last month. (Here's my very positive review.) So, if you haven't seen that one yet, your weekend viewing is now set!

I recommend seeing the action spectacular first and then the creepy horror flick. May the Devil Takes You follows a young woman named Alfie (Chelsea Islan), who heads to her family's disused home in the countryside after her father Lesmana (Ray Sahetapy) falls into a mysterious coma. Well, it's only mysterious to his family; the opening scene of the movie shows that he has concluded a pact with the Devil, and now it's time to pay up.

Alfie is preoccupied at first with old familial disputes, primarily with her stepmother (Karina Suwandhi), an actress who never stops performing, but also with her step-siblings. The house looks like it's not worth much, to the disappointment of almost everybody, but in search of anything valuable they can find, they open up a nailed-shut door, and that's never a good thing in a horror movie, especially one from Indonesia.

What follows is nasty, bloody, nasty, gruesome, and nasty. (Did I mention that it's nasty?) It feels like a massive sugar rush, as writer/director Tjahjanto takes delight in upending expectations while delivering exactly what hardcore horror fans want.

May the Devil Take You is now streaming worldwide on Netflix.

As far as other potential new streaming options this weekend, I watched the first of six episodes of Christoffer Boe's Warrior. It's a crime drama series from Denmark about a military veteran known as CC (Dar Salim) who goes undercover in a biker gang led by the ruthless Tom (Lars Ranthe) at the request of Louise (Daniela Curcic), a police investigator, mother, and also the widow of a soldier who died following the orders of his friend and commander, CC.

Boe (Reconstruction, Beast) created the series, which starts very well and is very dark, menacing, and promising for those of us who love Danish crime series.

New movies of note include The Crew, from 2015. It's a crime thriller that is tightly-paced, running just 80 minutes or so, and quite terrific, as I recall from a screening at Fantastic Fest back in the day. Julien Leclercq (Chrysalis, The Assault) directed. As Todd Brown wrote: "Leclerq is smart enough to not attempt to reinvent the wheel here, leaving the core heist structure intact while bringing his own distinct flavor and style to the mix with explosive results."

The Crew is now streaming worldwide on Netflix.

Other new titles of interest include the series Narcos: Mexico, starring Diego Luna and Michael Peña this time around, and She-Ra and the Princess of Power, an animated action series that endeavors to showcase a more welcoming female perspective for young audiences.

Do you feel this content is inappropriate or infringes upon your rights? Click here to report it, or see our DMCA policy.
Christoffer BoeJulien LeclercqTimo Tjahjanto

More about May the Devil Take You