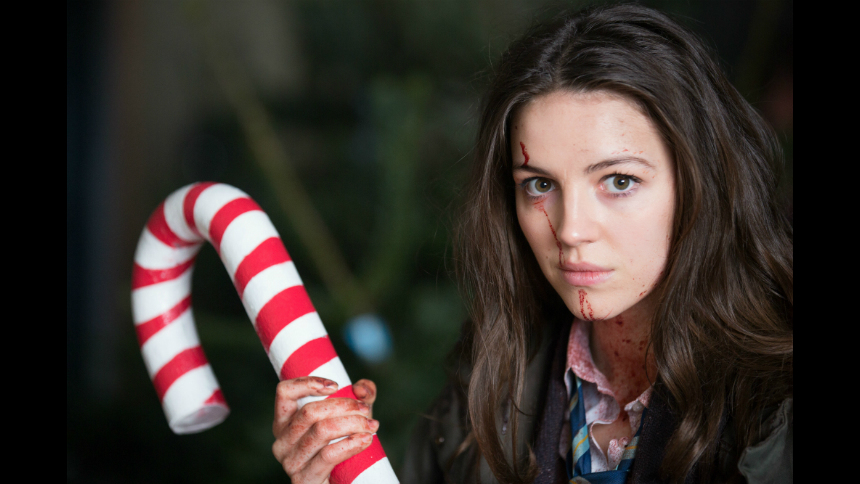 What do you get when you mash up High School Musical, Shaun of the Dead, and The Nightmare Before Christmas? The answer is director John McPhail's brilliant new Christmastime zombie musical, Anna and the Apocalypse, one of the most joyful films you'll ever see about the end of mankind as we know it.

Anna (Ella Hunt) is a high school senior looking to break free from her small town existence by taking a gap year to hike across Australia rather than going immediately to university, much to the chagrin of her hard-working single dad. She sees her life as a prison from which she must break free, and the only way to do it is to run away as far as she can.

First, however, she has to get through her last year of high school along with her friends, bestie John (Malcolm Cumming), a geeky kid obsessed with film, Chris (Christopher Leveaux), a drama club queen, Lisa (Marli Siu), an agitated activist, Steph (Sarah Swire, who also choreographs the film's many musical numbers), and her surly jock ex Nick (Ben Wiggins). They all think that high school is the toughest challenge they'll ever face, with their stern headmaster Dr. Savage (Paul Kaye) attempting to wring all of the fun from their lives, but they are about to be proven wrong when they wake up one day to a world in collapse as zombies have taken it over, and they have to fight their way to survival.

The film's basic structure is far from unique. The sudden appearance of the undead has been the basis for tons of zombie films, including the two I mentioned above as formative for me. What is unique is the way in which Anna and the Apocalypse approaches the subject, with a spring in its step and a song in its heart. This is a full on musical, characters burst into song at the drop of a hat, and its a glorious thing to see.

Even though the idea of a zombie musical isn't new (Dead and Breakfast, Z: A Zombie Musical), the way it is executed in Anna and the Apocalypse is far and away the most successful of the genre to date. The film plays like a bizarro world High School Musical, with ultra catchy pop numbers peppering the plot that are both remarkably well written and integral to moving the story forward. Many of the film's best songs, like No Such Thing as a Hollywood Ending or Human Voice, would work well on their own as teenage anthems of disaffected youths looking for the next step forward. If it were just a novelty piece, Anna and the Apocalypse wouldn't last too long in the hearts and minds of its audience, but thankfully the film is a really astutely observed reflection of teenage dissatisfaction. John's unrequited love for Anna plays a major part in the film, he is her Duckie Boy, Steph's sense of abandonment by parents who constantly move her around the world and then leave her to go on vacations alone, and the budding love affair between Chris and Lisa all get their moments to shine in the film without detracting from the overall vibe.

Anna and the Apocalypse draws from a number of very obvious sources for its staging of this minor miracle. The scene in which Anna wakes to the world gone wild, pops on her headphones and bops down the street singing her own song, blissfully unaware of the carnage around her is more than a little reminiscent of the same scene in Edgar Wright's Shaun of the Dead, and a later song sung by headmaster Savage brings to mind the ultimate rock musical, The Rocky Horror Picture Show. However, the mix never feels forced, nor does it ever feel derivative, it's a new thing, completely of its own.

Director McPhail manages to balance the film's tones, both terrifying and triumphant, extremely well. Even though we are aware that we are being taken on an unusual ride that we are meant to enjoy, the emotional stakes are high enough that the audience can't help caring about the characters and whether they'll live or die. Far more than just a simple compilation of musical set-pieces, Anna and the Apocalypse tells a complete, self-contained story that doesn't suffer at the hands of its quirks, but rather uses them to tell the story and draw the audience into the lives of these characters.

With a soundtrack that will have you humming the tunes from the second the lights go up in the cinema to a compelling and confident cast of young performers to whom even the stodgiest old grump can relate, Anna and the Apocalypse is a fantastic, toe-tapping terror that will have its audiences cheering in their seats.

Review originally published during Fantasia in August 2018. The film will open in select U.S. theaters on Friday, November 30, via Orion Pictures. Check the official site and official Facebook page (linked below) for more information.