Notes on Streaming: THE INNOCENTS, DEADWIND, ORDEAL BY INNOCENCE 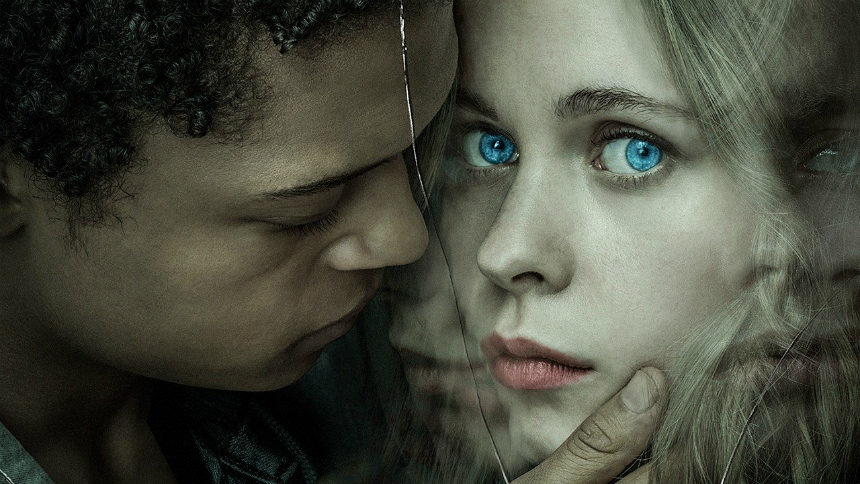 Three new series, all of European origin, take place in very different environments, from young adult romance to harsh adult reality to brutal family dysfunction, and play out in varying lengths. All have something to recommend them.

At its heart, The Innocents (available on Netflix), is a venerable 'on the run' romance, adorned by sci-fi trappings and bolstered by the presence of Guy Pearce and Jóhannes Haukur Jóhannesson. They portray Ben and Steinar, respectively, a doctor and his henchman at a remote, peaceful complex in Norway, where Ben has set up shop with his companion, Runa (Ingunn Beate Øyen), who can shift her shape into that of anyone she touches.

Meanwhile, the first episode lays out the relationship between two teenagers in love, June (Sorcha Groundsell) and Harry (Percelle Ascott). They have decided to run away together because June's harshly overprotective stepfather John (Sam Hazeldine), who allows her no personal freedom at all, has dictated that they will be moving with June's brother Ryan (Arthur Hughes) to a remote island in Scotland. By the end of the episode, however, June discovers that she too has the gift/curse of being a shapeshifter.

Throughout its eight episodes, The Innocents shifts shapes itself, alternating between young love and psychological drama, all expertly directed by Farren Blackburn (six episodes) and Jamie Donoughue (two episodes). Hania Elkington and Simon Duric created the show and wrote most of the episodes between them, so the shifts are (mostly) handled quite smoothly. The romance is kept age-appropriate, while the drama adds intensity, both as Steinar doggedly pursues the young couple and as Ben endeavors to work with the few women who have volunteered to be in his care at the Norwegian complex.

With a dark, moody vibe, The Innocents is easy to binge without being too hardcore about it. A multitude of secrets and lies are mixed with engaging performances. The series doesn't hit a serious bump until its final episode, which is overstuffed with twists and turns and a setup for a possible second season. Still, it all makes for worthwhile entertainment. 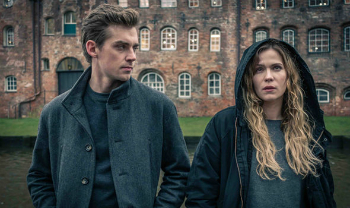 Flinty-edged, very wintry, and very cool, Deadwind (originally titled Karppi, and available on Netflix) is a Finnish police detective story, so of course I loved it. (Disruptive personal aside: I visited Finland to attend the Night Visions festival in 2015 and enjoyed myself immensely.)

Two weeks after the death of her husband in Hamburg, Germany, Detective Sofia Karppi (Phila Viitala) returns to work at the Helsinki Police Department. It's too soon, of course, which becomes apparent almost immediately when she begins investigating the death of Anna Bergdahl (Pamela Tola), whose body is found at a construction site.

The company that is developing the site, Tempo, is awaiting a construction permit from the city council, which is predicated on the company's brand-new, innovative and energy-saving windmills. Led by the unflappable Alex Hoikkala (Tommi Korpela), the family company's future is dependent on the success of the project. And Anna Bergdahl was a consultant to the company, and she was intimately involved with Alex, who is married, and, oh, it gets far more messy from there, especially for Anna's husband, Usko (Jani Volanen), who is already fraying from the edges.

The primary focus, however, remains on Karppi and her new partner, Sakari Nurmi (Lauri Tilkanen). Nurmi has recently transferred to the Violent Crimes Unit from the Financial Crimes Unit, which means Karppi doesn't trust him and Nurmi is out to prove himself.

As Karppi and Nurmi search for a killer and investigate a range of suspects, they keep solving other crimes, almost by accident, throughout the 12 episodes of the series. The other suspects are not red herrings; they are (almost) always guilty of a crime, just not the murder of Anna Bergdahl. They helps to keep the tension constantly bubbling, if admittedly at a lower range of intensity.

The partnership between Karppi and Nurmi is the key, of course, and it works very well, due in large part to Phila Viitala's performance. She is entirely convincing as an experienced detective who must also deal with her own guilt and grief over the loss of her husband, as well as being a surviving stepmother with two children who really don't like her that much.

The series premiered on Yle in Finland this past March before being acquired by Netflix for worldwide distribution. Director director Rike Jokela cowrote the series with Jari Olavi Rantala and Kirsi Porkka.

I binge-watched the first four episodes this past Saturday and then kept getting drawn back to it over the next couple of days until I finished it. Deadwind works well with a little time in between episodes, to allow the drama to sink in. 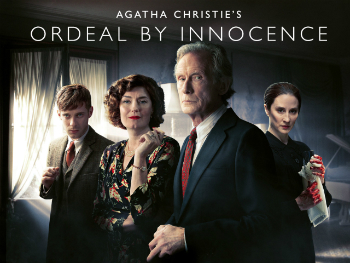 The most traditional of the three, Ordeal By Innocence (available on Amazon Prime) is based on a novel by Agatha Christie. First published in 1958, it was previously adapted for the big screen in 1985 and for television in 2007.

The new adaptation stretches to nearly three hours (over three episodes) and was broadcast as a BBC miniseries in April 2018. The show raised hackles because of changes made from the novel, including the idea of portraying some of the characters in a much more negative light.

Indeed, though I haven't read the book, the ample negativity made it difficult to suffer through all three episodes. Set in the 1950s, the story starts with the murder of Rachel Argyll (Anna Chancellor), who is the brash and unlikable leader of a wealthy family in England. She and her husband Leo (Bill Nighy) have adapted five orphans and raised them into unhappy adulthood, more for appearance's sake -- they can't have their own children -- than for love.

Jack (Anthony Boyle) is accused of the murder, imprisoned, and soon after killed in prison. The family tries to move on, and Leo is engaged to marry Gwenda (Alice Eve), to the displeasure of his surviving children Tina (Crystal Clarke), Mickey (Christian Cooke), Hester (Ella Purnell) and Mary (Eleanor Tomlinson), not to mention Mary's bitter husband Philip (Matthew Goode), disabled in the war, and longtime housekeeper Kirsten (Morvern Christie). Then Doctor Arthur Calgary (Luke Treadaway) appears, claiming to be Jack's alibit for the murder, throwing the household into further disarray.

The hurdle that I could not get over was the very negative characterizations by writer Sarah Phelps. Sandra Goldbacher directed the series, and it's a very sumptuous feast, though served cold and miserable to the touch. Nearly all the actors appear to delight overly much in their character's dishonorable qualities, and the show often feels on the brink of total disaster.

Ella Purnell won me over with her portrayal of Hester, perhaps the least odious member of the family, but it was difficult not to be utterly repelled by everyone else. I'm perfectly alright with changing and charging up the source material, but I'd prefer to see something more discerning than simply flipping the characters into mean and nasty territory.

Notes on Streaming covers original movies and series that are available legally on streaming services.