Zak Knutson’s Supercon is a caper comedy set around the world of the fan conventions, in which a group of not incredibly successful actors and comic book artists get fired from the titular con and decide to get even by stealing the money that belongs to the con’s boss and to a former star who is actually just a jerk.

Clancy Brown plays the film’s main antagonist Adam King, an actor who is quite full of himself. Once he arrives at the convention, he charges the fans huge amounts of money for a photo or an autograph, bullies his ex TV co-star Keith Mahar (Russell Peters), and in general just acts like an arrogant, greedy prick who evidently doesn’t care at all about pop culture nor his admirers.

Clancy Brown himself is the total opposite of his character Adam King, as he remains humble and laughs at the very idea that fans of cult cinema might consider him as a true legendary character actor. But just look at some of the highlights from Mr. Brown’s prolific filmography: cult classics from the eighties The Adventures of Buckaroo Banzai Across the 8th Dimension and Highlander, Frank Darabont’s prison drama The Shawshank Redemption, Paul Verhoeven’s science fiction/war masterpiece Starship Troopers, Don Coscarelli’s latest directorial effort John Dies at the End, the Coen brothers’ period piece about Hollywood Hail, Caesar!, and Taika Waititi’s hilarious MCU installment Thor: Ragnarok. Brown has also many credits for voice and television work, lending his voice to SpongeBob SquarePants’ Mr. Krabs since the animated show’s debut in 1999, as well as being one of the main performers in the HBO series Carnivàle.

Prior the release of Supercon (now in theaters and on VOD and Digital HD), I spoke with Clancy Brown about such subjects as his experience working with John Malkovich (who plays one of the men plotting the big Supercon robbery), fanboy culture, Thor: Ragnarok, Buckaroo Banzai, and today’s ‘80s nostalgia.

ScreenAnarchy: You have been in all types of films, working with some of the greatest directors ever [i.e. Paul Verhoeven, the Coen brothers]. Nowadays what is it that a movie needs to have you interested?

Clancy Brown: I always read the script, if the script tickles me then I’m up for it. I’m not good enough to do something I don’t feel moved by or think is funny. This movie Supercon, I was at the Edinburgh film festival, I was jury there and I was stuck in a room watching European films that were quite well done; and this crazy screwball caper comedy got send to me. It hit me when I needed it the most, probably saved my psyche there for a while, I laughed out loud and couldn’t wait to get on it. Right after Edinburgh I flew to New Orleans, we started the movie and it was a lot of fun. 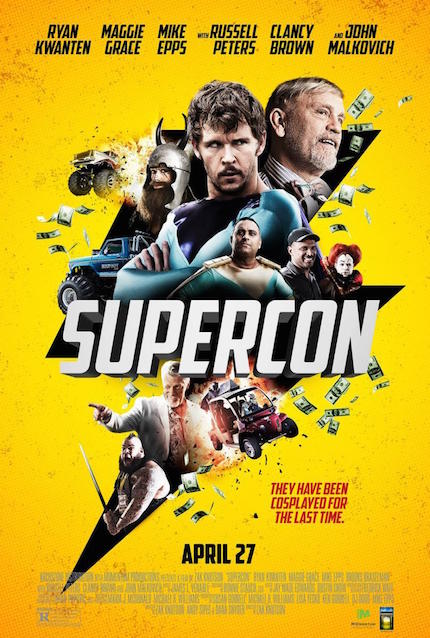 SUPERCON is a comedy film but you play the main antagonist…

Yeah, Adam King is a washed-up eighties or nineties TV star, he doesn’t know he’s washed-up and he still thinks he’s a big star, goes to the cons and charges way too much for signing his pictures, treats the fans poorly and think he has license to do that, but he doesn’t. Then our heroes, they sort of figure out how to make him pay, and by the end of the show they accomplish their goals. It’s truly his fault, he ends up doing it to himself. The lesson of the movie is, don’t treat people badly, or else you get kick in the balls.

What was the most interesting aspect of playing an actor who doesn’t care at all for his fans and still benefits from them?

You have some scenes with John Malkovich. How fun was working with him?

John and I were in Chicago around the same time. I was a college student, and Steppenwolf was starting out as a theater company. We hadn’t seen each other since he became a movie star, so it was good to catch up with him. We were kind of the two old guys sitting on the porch talking about the old days, our kids, Michael Jordan, the Jordan years in Chicago. It was kind of fun and familiar. He has always been a special guy, a real one of a kind, Mr. Malkovich. I like him.

SUPERCON is about the fanboy and pop culture…

Yeah, it’s about conventions. It’s an interesting economy those conventions, they sort of stand alone right now, and there’s big ones, little ones, medium size. Some people I know make a pretty good living going to these cons. There’s a little bit of that in this movie. In the end it’s just a bunch of people, who all love the same stuff, getting together and having fun.

Being part of real cult movies, like HIGHLANDER and THE ADVENTURES OF BUCKAROO BANZAI ACROSS THE 8TH DIMENSION, what’s your take on this culture?

They’re just movie fans. People that love stuff like Buckaroo Banzai and Highlander are the same people that Supercon is about, and thank goodness, otherwise I would probably be flipping burgers someplace. 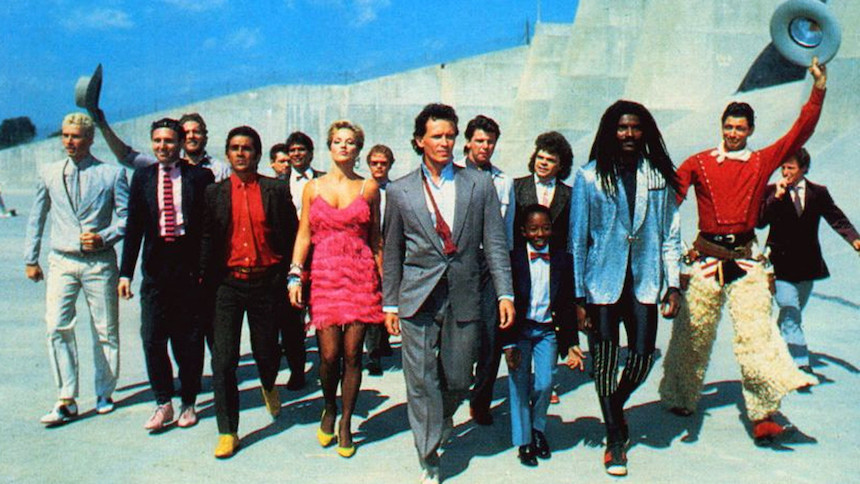 The funny thing is that pop culture today is looking back at the eighties, recently with THE ADVENTURES OF BUCKAROO BANZAI ACROSS THE 8TH DIMENSION having an important role in Steven Spielberg’s READY PLAYER ONE. What’s your opinion of this phenomenon and young people who are going to look back and watch those movies?

I haven’t seen Ready Player One, or read it, so I don’t know specifically what to say, but it’s not uncommon that people go over they shoulders and try to summon up what they perceive as the golden age or a better time or something like that. That’s happening now again, I mean, look at Guillermo's [del Toro] movies, The Shape of Water, we were big fans of Creature from the Black Lagoon and we saw it [The Shape of Water] as Creature from the Black Lagoon the sequel. You can build on that, and I think Guillermo does it really well. Spielberg does it to a certain extent. There’s some great filmmakers out there. It’s an evolution that goes on and on. 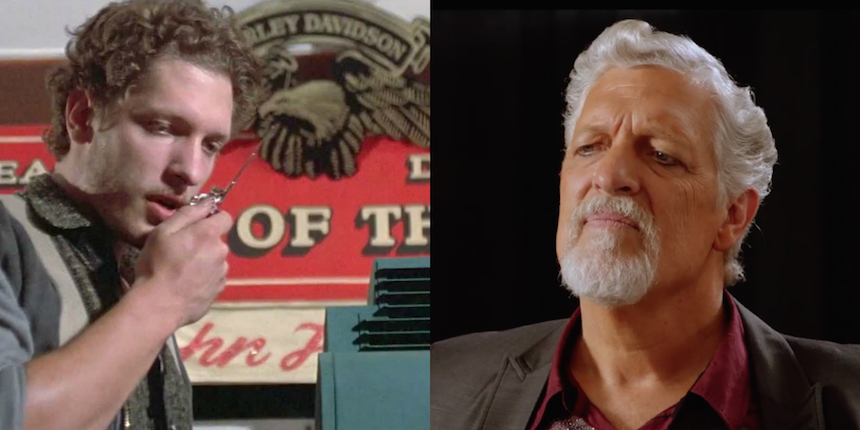 Why do you think that movie in particular still resonates? I know Quentin Tarantino, Edgar Wright and Kevin Smith are huge fans.

I don’t know, what I can say is I think it just sort of struck people by surprise. It didn’t do any business when it first came out. But it sort of had something for everybody. It was very quirky and odd, when I read it I certainly couldn’t tell what was going on, it seemed to be satirical but at the same time it seemed to be sincere. In terms of anthropology, it’s kind of a nice little snapshot of the mid-eighties and that culture, you know? The clothes, the hair, the music and everything. They are talking about resurrecting it somehow, I think that would be very cool. We’ll see. It’s an interesting, good little movie, but it was very strange and weird, when studios were making strange and weird movies… now they don’t do that.

Talking about film studios, you were just part of the Marvel Cinematic Universe with THOR: RAGNAROK, and now you’re back doing a little comedy film. How does that work for you nowadays?

Oh, I do whatever they want. I’ve done some animation stuff, but Thor: Ragnarok was the first time anybody asked me to do a Marvel movie. Taika [Waititi] makes really quirky little movies, he’s terrific, and I love his little movies. When he called me and asked me to do the voice of Surtur, I said, you’re a great filmmaker but why did they ask you? [Imitating Waititi’s voice] I have no idea, mate, but I’m having a great time doing it.

I think as long as you stay in the line that Marvel and Disney draw for you, somebody like Taika or [Jon] Favreau can make a really good movie as long as he doesn’t go too far out of bounds. And then you just get on and do quirky little movies, like Favreau after Iron Man and Cowboys & Aliens and all the big budget movies, he went and made Chef, a terrific movie.

Thank God people like Taika are out there, getting the big payday and then they can go do their little movies. Taika is a great example… Sam Neill made Jurassic Park, right? That was the biggest movie ever, then that whole franchise, then he went and did Hunt for the Wilderpeople for Taika, who was nobody then. And I think he’s the best he has ever been, Sam Neill in that one. Actors fit into whatever shape you want for us.

What does it mean to you to be considered as one of the greatest character actors?

Who thinks that? [Laughs]. I’ve got a list that’s way ahead of me so I don’t know if that’s true. I’m just a dude that does a job, you know? I’m still working on being good… when I become one of the greatest character actors and think of myself that way, I’ll let you know. But I’m still thriving, still figuring out every role.

Supercon is in theaters and on VOD and Digital HD today. Available on DVD June 5th.

Do you feel this content is inappropriate or infringes upon your rights? Click here to report it, or see our DMCA policy.
Clancy BrownHighlanderReady Player OneSuperconTaika WaititiThe Adventures of Buckaroo Banzai Across the 8th DimensionThor: RagnarokZak Knutson

More about Ready Player One