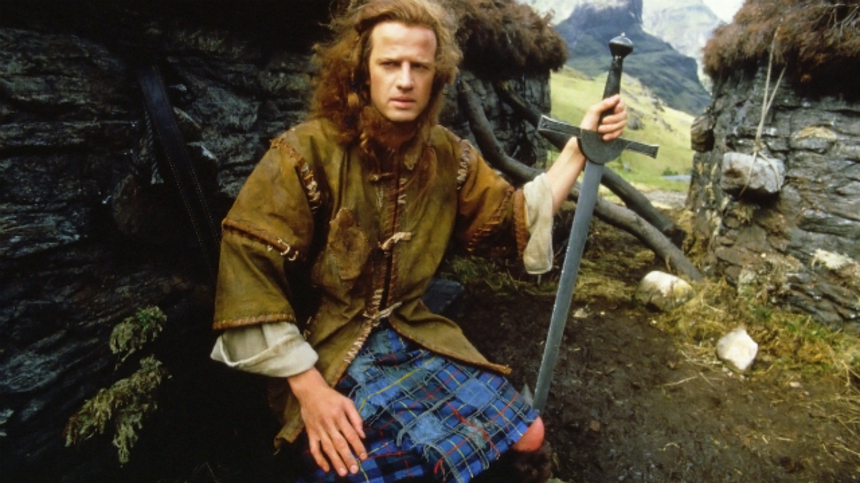 Connor MacLeod, the Highlander, was reborn into the life of an immortal after dying on a battlefield in the highlands of Scotland in 1536. In 2016 he returns to his homeland once again for the world premiere of a glorious 4K restoration at the Edinburgh International Film Festival.

Highlander, a classic of science fiction fantasy, cuts between ‘modern day’ New York (now a gloriously grotty 80’s Big Apple) and medieval Scotland to tell a tale of sword-wielding immortals. The second feature of music video director Russell Mulcahy, the film starred Christopher Lambert as Macleod, Sean Connery as his sophisticated mentor Ramirez and Clancy Brown as terrifying barbarian/punk The Kurgan. Having lived for centuries, the remaining immortals converge to fight for the ultimate prize. Protect ya neck, there can be only one!

While Clancy Brown was present at the June 18th premiere of the film and James Cosmo, who played loyal clansman Angus MacLeod, turned up towards the end, I was lucky enough to get a call in to the Highlander himself, Christopher Lambert as he made his way to London in support of the film.

How do you feel about the enduring popularity of HIGHLANDER?

Well, you know it’s always a dream that a movie will carry over the generations, over the years, thirty years now, and still be as liked as it was years ago. I met a kid who was 12 years old holding a picture from Highlander and I’m like, “How did you see that movie?” and, well, his father showed it to him and his grandfather showed it to his father! It just doesn’t happen that often for a movie to keep on going.

It’s interesting that the film wasn’t so well received on first release and like many great films it went on to be embraced and reach this kind of classic status.

Well, what was funny was that the movie was really big in Europe but it wasn’t that big in the states. It became bigger because people were talking about it saying, “Go on and see that movie”.

You’d already done an English language film with TARZAN, what made you want to take the role of Conner MacLeod?

With Highlander I was interested in the idea of a movie dealing with immortality and what it represented, more than the action side. That's what attracted me to the script to start with. I thought immortality was such a romantic thing; how do you cope with gradually living over six-hundred years, over a thousand years, how do you cope with the tragedy of immortality? With the pain of it? You keep on walking; you keep on looking at life with an optimistic view, at the positive side but in a way thinking, “How is that possible?” It’s difficult to live one life, if you have six or seven how does this guy do it?

Do you think you gained a degree of immortality with the endurance of this film?

Ah, I have no idea. The future will tell us that.

The locations are fantastic, violent modern New York, medieval Scotland and I believe you shot in London too…

You know, it’s funny because I play a guy who can kind of time travel: you have so many friends, you’ve been all over the place for the last 500 years. The movie was a little like that, you know, going to London, going to New York, etc. etc. It's a lot like my life when I was a kid. I was raised in Switzerland and my parents were traveling all the time, so I had been to a lot of different countries. I felt like I had lived it already and I understand a part of this character because of that.

That fits with a line I really like in the film where the cop in the interrogation room says, “You talk funny, Nash, where you from?" And you reply…

Yeah, it’s exactly what I had experienced as a kid. I never knew where I was going, and I‘d been on planes and I was living between New York and LA and Paris, etc. so it’s not that it’s complicated, it’s just like the school I went to in Switzerland had 28 different nationalities in the classroom, so all these kids put together… it's a jumble what these guys might have gone through over a few years of life.

Was there any conversation after you got the role, with both you and Sean Connery, about accents and places and where you are from?

Yeah, absolutely. I trained with a voice coach for a Scottish accent for about 12 to 16 weeks. So in the morning I was doing that and, oh yeah, on top of that at the time I didn’t know that Sean Connery was going to be part of the movie! But when I knew that an actual Scottish accent was going to be in there I thought, “Now I’ve got to work hard!” But, yeah I was doing that in the morning and then sword fighting in the afternoon. We did about 14 weeks of voice coaching and sword training

And what was more difficult, the sword fighting or the Scottish accent?!

It was so different. One was physical, involving not only the sword but also lots of running and how to do many different convincing moves. The other was going step by step, gradually, not trying to get the Scottish accent at once. It was every day, every day repeating the same words, the same lines with the voice coach on the set, so it was a completely different type of work.

What are your memories of filming in Scotland?

Oh, my memories of Scotland are still fresh because I go back there all the time, I was invited to this festival, Edinburgh, but unfortunately couldn’t make it. I’ve been back many times to Scotland because the nature is so strong and fascinating and powerful that it’s a place I love to go back to.

It’s unique to the world and there’s a beauty there: the fact that there’s four seasons in one day! It’s snowing, it’s hailing, it’s raining but it’s also sunny! I remember one shot on Highlander 3 with snow in the foreground and a sunset in the background. It was pure magic. I love Scotland and the Scottish people because what you see is what you get, there’s no bullshit, they are what they are, they don't pretend to be something else and I really love that in people. Especially in my business.

I hear you’re going to meet Clancy Brown again in London. What are your memories of filming with him?

Yeah, I’ve bumped into him a couple of times in the States but I’m going to see him again on Sunday. We were very friendly but Clancy is someone who likes to stay in character. So, I can’t say we went out often, you know everybody has to find their own way with acting. For me, my way of acting is between “action” and “cut”.

For other actors, the extreme characters of the old movies, some of them stay in character two years after the movie is out. Clancy, from what I saw, liked to stay in character during the day when we shooting. But he was an extremely nice and good person.

It was great to see you on screen again in HAIL, CAESAR! What will you pop up in next and are there any new HIGHLANDER projects on the horizon?

Oh, thank you. I have no idea at the moment what’s going to happen [with Highlander]. I didn’t hear anything about it for seven years. Next, I’m going to do a French movie with Claude Lelouch, shooting in July.

Do you feel this content is inappropriate or infringes upon your rights? Click here to report it, or see our DMCA policy.
christopher lambertHighlanderRussell MulcahySean Connery

I once watched Highlander 3 times on one day. I did not think it too many. What an amazing film.

Watching Highlander 3 3 times on one day, now that would be too many ^^.

Appreciate the interview, but just a correction. Highlander was not Russell Mulcahy's debut feature. Mulcahy had previously directed the killer boar movie Razorback.

Hahaha, absolutely. I think watching any of them other than the first one is a bridge too far, at least to anyone with half an ounce of taste. I did enjoy the third one well enough the first couple of times i watched it, it was pure stupidity but had its moments, but the original is a real classic.

Ha, so he did. How could I forget Razorback!?

Better burn out than to fade away! ARGH!!!!!