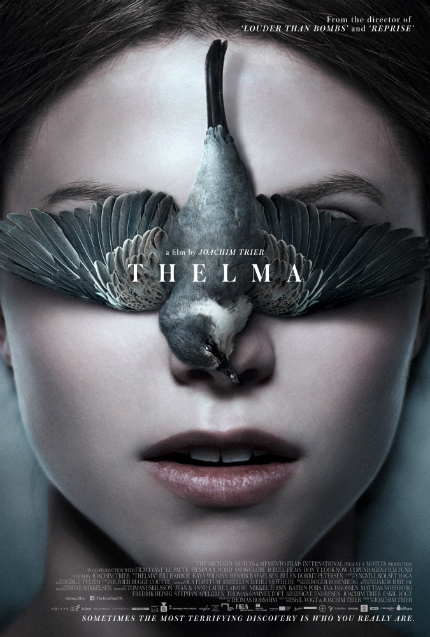 His latest, Thelma, promises a bit of a change. It's described as a supernatural thriller, which a new trailer well illustrates. Here's the short synopsis:

Thelma, a shy young student, has just left her religious family in a small town on the west coast of Norway to study at a university in Oslo. While at the library one day, she experiences a violent, unexpected seizure.

Soon after, she finds herself intensely drawn toward Anja, a beautiful young student who reciprocates Thelma's powerful attraction. As the semester continues, Thelma becomes increasingly overwhelmed by her intense feelings for Anja -- feelings she doesn't dare acknowledge, even to herself -- while at the same time experiencing even more extreme seizures.

As it becomes clearer that the seizures are a symptom of inexplicable, often dangerous, supernatural abilities, Thelma is confronted with tragic secrets of her past, and the terrifying implications of her powers.

The first trailer was mighty impressive, and now the aforementioned, electrifying new trailer has arrived, just ahead of the film's world premiere at the Toronto International Film Festival this weekend. It will screen at Fantastic Fest later this month and then the New York Film Festival. And it's already been chosen as Norway's official Oscar® entry for Best Foreign Language Film.

Eili Harboe, Okay Kaya, Henrik Rafaelsen and Ellen Dorrit Petersen star. Watch the new trailer below and see how long it takes before your spine starts tingling. Then take a look at three new images, also below.

Do you feel this content is inappropriate or infringes upon your rights? Click here to report it, or see our DMCA policy.
Eili HarboeEllen Dorrit PetersenHenrik RafaelsenJoachim TrierNorwayOkay Kaya