Review: In THELMA, Nothing Happens Without a Butterfly Effect 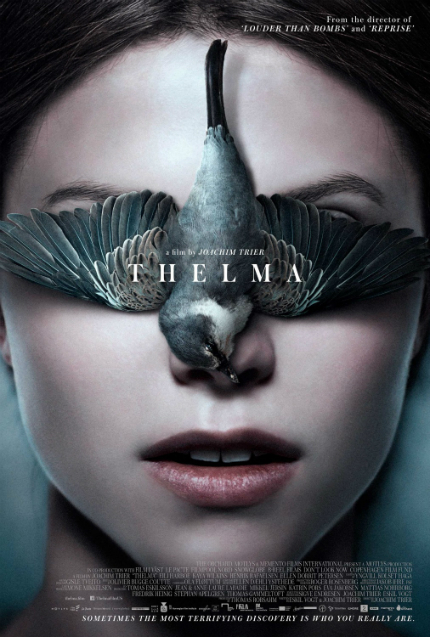 Directed by Joachim Trier, Thelma follows the titular character played by Ellie Harboe -- a young, beautiful student -- as she ventures to Oslo, Norway for school.

Growing up is hard enough, but when you have acute seizures and come from a staunch religious household, it gets worse. That's even more true when Thelma meets another student who awakens powerful, deep-rooted feelings. What happens when you're in love with a girl but your parents will never accept that, nor can you accept that in yourself? The conflict just might destroy you. In America, this narrative is certainly pervasive, and it's no doubt going to ring true all over the world.

The opening scene is a shocker, for sure; as a young child, Thelma is out in the snowy wilderness hunting with her father. He aims his rifle at his prey, but then slowly swivels the weapon toward his daughter's head. I'm not sure I've ever seen such a powerful portrayal of the anguish of a parent focused toward a child in an opening scene. You can be assured from that moment on, that Thelma will never lose your interest. We don't find out exactly what caused Thelma's father, a religious man, to point his gun at her until much later in the film. I'd nearly forgotten about these horrors until Trier brought the audience back into that timeframe with a masterful flashback, which was just as shocking and potent.

Nothing in Thelma happens without a butterfly effect, and it's rare that a film is so completely satisfying -- which is even more difficult to get right when the story is so infused with melancholy. Even the heady waves of first love and lust are captured just so, and may cause just as much rapture as the characters experience on screen. I dare you to recall such electricity and passion in a film. To this end, Thelma is not just exquisite, it is transcendent.

But back into this delicious darkness; as Thelma's seizures become the norm, her relationships disintegrate on a parallel timeline. We also discover that things at home aren't quite as great as her parents would like them to be, and without giving too much away, I'm willing to bet that Thelma herself is but a scapegoat among the all-too-righteous. Even in the film's imagery of the story's most terrible things, there is great beauty to behold; at times, it's simply breathtaking. Much of that imagery plays with water: in her sweat, in the ice, the bathtub, and the lake.

While no major character in Thelma comes out unscathed, there, too, is hope in the film's denouement, an unexpected and welcome ending that's as poignant as it is truthful.

Review originally published during Fantastic Fest in September 2017. The film will open in select U.S. theaters on Friday, November 10, via The Orchard.

Do you feel this content is inappropriate or infringes upon your rights? Click here to report it, or see our DMCA policy.
Eili HarboeEllen Dorrit PetersenHenrik RafaelsenJoachim TrierNorwayOkay Kaya